One of the most popular forex strategies is to trade breakouts because it is easy to implement and can produce excellent results. The main concept of this trading method is that when a currency pair has been trading for some time within a tight range and breaks out of this pattern, it usually continues to move in the same direction for quite some time. It is this move we want to capitalize on.

As such, your initial step in designing a breakout strategy is to locate a method that will readily identify currency pairs that have been trading within a tight range for a period of time. Once this is achieved, you can set potential entry conditions that will be activated when a breakout occurs. Although breakout trading can be applied to any currency pair, from a personal point of view I prefer to apply it to the major currency pairs. This strategy tends to work well on the majority of pairs. However, I am favoring major pairs due to a lower spread, and as I have been trading these pairs since I began my forex experience I have a better intuition of how they act.

The tight trading range of a currency pair is confined by a resistance level and a support level. Very often, a price will bounce against its resistance or support a number of times before it finally bursts out. For example, assume the EUR/USD has bounced off its resistance level at 1.2200 a number of times. An eventual breach of this level is a very strong signal that you should seriously consider entering a long trade. 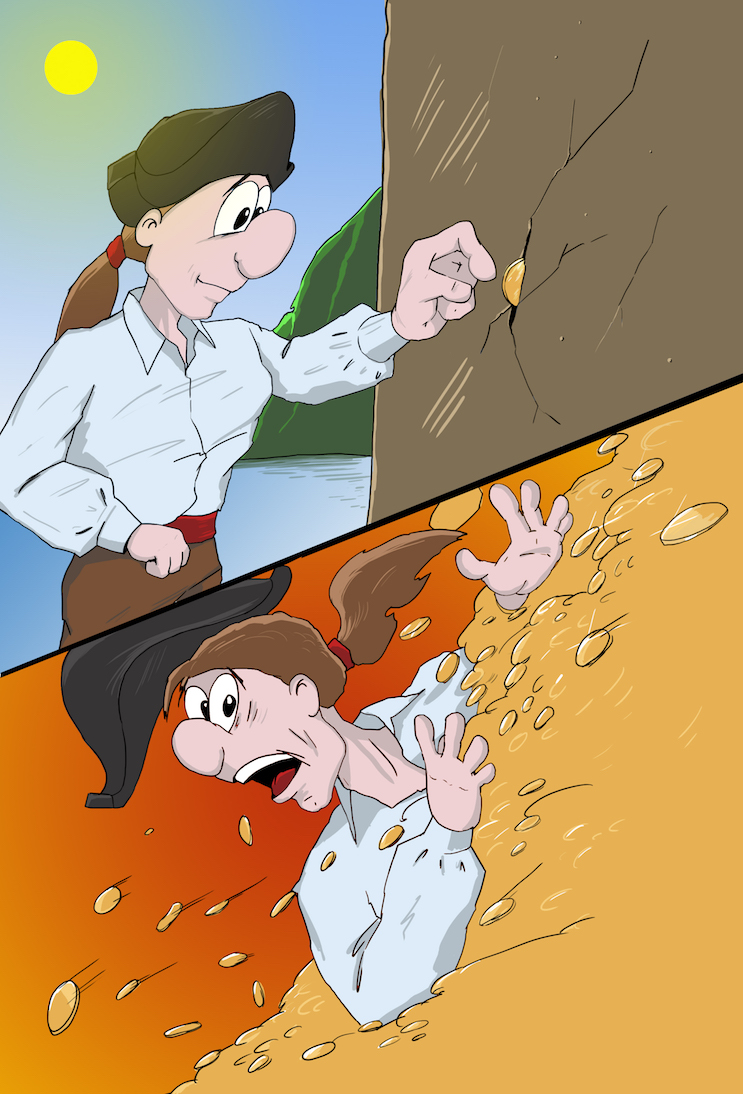 A very good policy is to monitor for breakouts using technical analysis. When doing so, you should use longer time frames as they produce more accurate statistics. My personal preference is to use the hourly or 4-hour charts. In addition, I have found the best policy is to wait for the close of the time period during which the breakout occurs. This will then allow you time to confirm that the breakout is real as well as providing some protection against false readings. I often study the charts on a daily, even weekly period to find strong levels. I then based my entry on the 1 or 4-hour candles.

The drawback against using this technique is the possibility that the price could keep rising dramatically and even approach your intended target before the period close occurs. If this does happen, you do not want to activate a new trade. More frequently though and if you do not apply patience and wait for the period close, you could often expose yourself to an increased risk of activating a losing trade generated as a result of a false signal or fakeout.

When a currency pair does close significantly above the breakout level, a retraction frequently happens that pulls the price back to the original breakout level before it proceeds in the original direction of the breakout. There is much speculation that this effect is actually caused by large banking institutions who force these types of price actions deliberately stopping out retails traders.

My trading method, in these cases, is to place an entry order at the original breakout point with a stop of about 50 pips. By doing so, I can quite frequently capture a more profitable breakout position and at less risk. That is, when the level I am watching has been broken, I wait for confirmation in terms of a close of the 4-hour candle above this level. If the pair went far above (for a long trade) the actual level, I will wait for a retrace back to the original resistance (which is now support) level and enter here. However, if the pair closes the 4-hour candle say 10 to 20 pips above (for a long trade) the resistance level; I tend to enter right away. This should not be considered as the almighty truth as you need to take your preferred stop loss level into consideration, before you can determine if the potential trade is viable. If you intend to use the 4-hour time frame, then you may consider providing your trade more room by using a 100 pip stop loss. A good strategy is to place your stop about 30 pips below the floor value of the original tight trading range.

Always keep your risk:reward and win:loss ratios in mind and seek better trading positions should the opportunity arise. If the risk:reward ratio for a potential breakout trade is bad, you might want to reconsider if it is worth entering it.

I have found from experience that my breakout strategy works best when I incorporate it together with technical features such as resistance, support and pivot points as well as technical patterns such as flags, pennants, etc.

One of the prime reasons for using a breakout strategy is that it provides the opportunity of entering a trade at the earliest signs of a new trend or price channel developing. This is a very lucrative position to capture because these positions can be the starting points of major price movements that can be entered at minimum risk. As stated before, a breakout occurs when a currency price breaches either the support or resistance levels of a tight trading range. The increased volatility that provides the momentum for the price to achieve this breakout is then usually capable of propelling it further in the breakout direction for some time. When this happens, a new price channel is likely to be created. The most powerful breakout events often occur when the price pattern emerges from technical patterns such as flags or pennants. This concept is very important to realize no matter which type of trader you are i.e. intraday, daily or weekly etc. The best breakout candidates can usually be identified by detecting the following conditions. Has the price bounced off its support or resistance a number of times? Is the trading pattern forming a flag or pennant formation? If so, the price will need to develop large amounts of momentum in order to force a breakout that are so big that they are capable of generating extended advancements in price movement. Entry points for breakout trading are very easy to determine. Wait for the close of the time period containing the breakout and then set an entry just above the original resistance for a bull position or below the original support for a bear position.

You must take care to distinguish a true breakout from a fakeout. A fakeout occurs when the price breaks out only to finish trading back within the original tight trading constraint at the day’s end. This is why it is so important to confirm a positive close at the end of your current trading period before taking action. If you act too quickly, there is less probability that the price momentum will be sustained. This is why many traders look for additional signs such as an increase in volatility to confirm a real breakout. This is also what often happens when people determine support and resistance levels on higher timeframes, and then decide to enter when the level has been breached on a short time frame such as the 5 – 30 min. time frames.

From my personal experience I can promise you that you are very likely to be caught in fakeouts if you try to trade a breakout strategy on a short timeframe. In addition, you must devise a good exit plan before embarking on a new breakout trade. One technique is to consult recent trading patterns of the currency pair in question. You can then determine a realistic target by calculating the average of recent price swings for example. With breakouts, an old resistance becomes the new support in a bull breakout while an old support becomes the new resistance in a bear one. Using this information, you can locate a good position for a stop by placing it either below the new support or above the new resistance level. However this is best to apply when a retrace confirms that an old resistance level now works as support or the opposite. Should the trade settle back within its old trading range, then effectively your breakout has failed and you should immediately consider an exit route. A suitable positioned stop will allow you to do this, which you need to select at trade entry. Very importantly, you need to accept your loss as quickly as possible and not allow it to grow into a monster.

If I trade a breakout before a possible retracement and confirmation, I would put my stop loss some 10 pips below the old support level (for a long trade) simply to protect myself from a possible fakeout. However this should only be applied if you feel that the profit target is far enough away to secure you the proper risk:reward ratio. In other words; if you expect that if you can enter a trade after a breakout and a realistic profit target is say 20 pips away, but you need to have a stop loss of 40 pips because the range of which the pair broke out was rather large, then you might want to reconsider the trade. However this is often the beauty of such a strategy; these ranges are often rather small, hence often provides you with favorable risk:reward conditions. This is especially true when trading triangle patterns as these get narrower over time.

So in summary, your breakout strategy must allow you to perform the following steps with confidence: First, you need to identify suitable currency pairs that are prime breakout candidates. Search for pairs that have been trading in a tight range for some time.

Preferably, locate those that have formed clear trading patterns such as flags or pennants. Look for strong resistance and support levels that the price has bounced against a number of times. This implies that the currency pair contains large amounts of pent-up energy waiting for release.

Your next step is to simply wait for the breakout to occur. Once this event happens, confirm the breakout’s real intentions by waiting for the close of the time period of at least one hour and preferably four hours. This will help protect you from fakeouts. Before entering the trade, you must select an achievable exit target by using a method such as calculating the average movements from historical data under similar conditions. You need also to realize that many times the trade will retest its old resistance or support levels before proceeding further. So you need to be prepared for this mentally. You also need to take the stop loss level into consideration; is the risk:reward favorable or not?

If the levels hold then a new price channel could well be formed. If not, a fakeout could occur and you need to exit using your predetermined stop strategy. If after a period of time e.g. one day, no clear confirmation of the breakout has materialized, then you should consider closing your position, preferably without loss, and moving onto your next opportunity.

Breakout trading requires patience and a good plan that ideally should remove your emotions from the equation. This is because the market needs to generate considerable amounts of volatility to force a breakout. Afterwards, price movements can move rapidly resulting in many traders becoming over-excited and, as a consequence, suffer impaired judgments. Your plan needs to ensure that you remain emotionally detached during these events and trade professionally with achievable targets and minimum risk. Finally, you are well advised to test your new breakout strategy thoroughly before using it in full force. You can do this by calculating your strategy’s expectancy value and win:loss ratio as explained in previous chapters. This should be done first by using historical data for your chosen currency pairs before advancing onto demo trading or live trading using minimum amounts.

Designing a profitable breakout strategy takes time, but the effort is well worth it.