Fundamental data releases of high importance are often regarded as the supernova events of forex trading. Examples include:

⦁ The US Non-Farm Payroll,

⦁ The US Trade Balance,

⦁ The US Unemployment Claims

These releases can ignite rapid price changes or spikes in most of currency pairs, especially if the releases are from the US. For particularly large movements to occur, the actual release must surprise the market by registering a notable discrepancy from its predicted value. Close correlations do not have the same impact as the market will have already priced in the forecasted value. 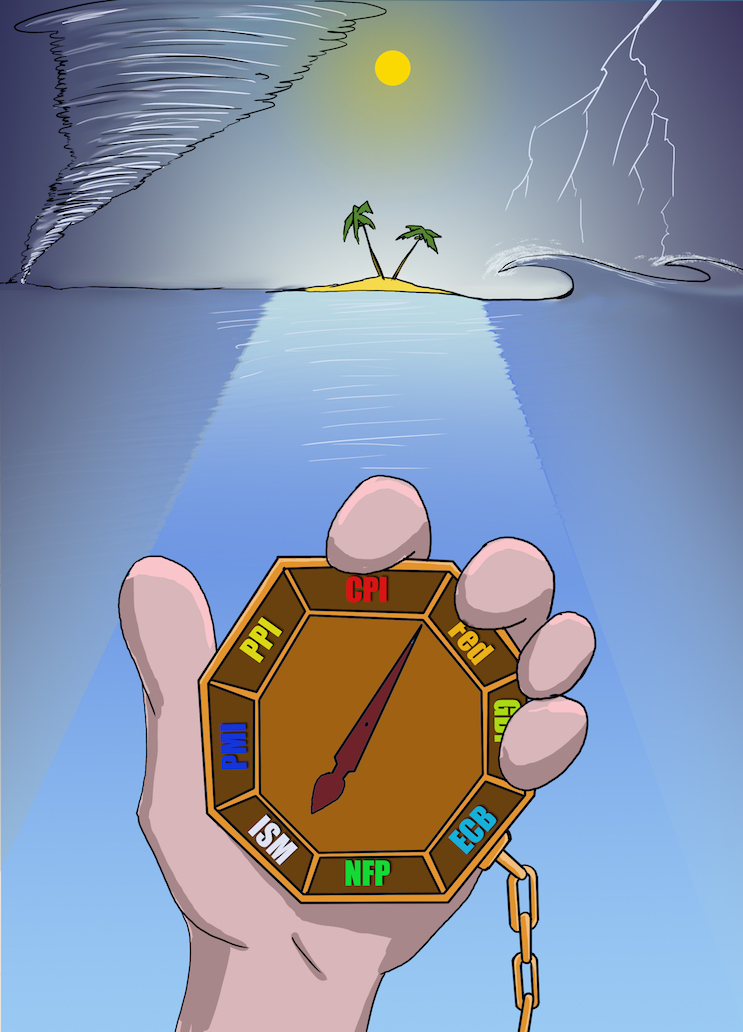 If you could correctly predict and then capture the resulting price movements created by fundamental data releases, this would be very a profitable exercise. However, many forex traders, especially novices, do not realize how difficult this is to achieve on an ongoing basis. One of the main reasons for this is that many human minds contribute to the actions of the forex market, each with their own agenda. This feature is particularly evident with the release of highly important fundamental data.

The purpose of this chapter is to explain why this activity is prone to so many complexities as well as providing the basis for possible solutions (news-trading strategies will be discussed in chapter 15). To begin with, let’s come up with a definition of what exactly fundamental data releases are.

Fundmental data release means any news that impact national or international economies, either directly or indirectly. These are fundamental events and can roughly be categorized into three types: economic/financial, political and unforeseen events.

Economic and financial data releases tend to have the biggest impact and are scrutinized by most investors because of the uncertainty of their outcome. As any significant difference between the actual result and it forecasted value can produce major changes in the values of currency pairs, these reports are kept under strict secrecy right up to the moment of their release. The deciding factor in whether such a fundamental news release will generate market movement depends on how close the result matches the economists’ prediction. A close correlation will cause little change as the market has already priced in this effect. However, if the release strays from the anticipated number then this could cause serious movements. Economic calendars are readily available detailing the exact time and dates of all fundamental data releases because of the impact they can have on the markets. You can see the Forex Peace Army Economic News Calendar here.

Political events that affect the market include government elections, G-7 and OPEC meetings and national crises etc. The majority of these events are forecasted well in advance. They can certainly affect the market in unforeseen ways, but most often not in the same manner as with economic/financial news.

Unforeseen events, however, are per definition impossible to predict. Especially ones such as terrorist attacks and

global catastrophes are much more difficult to predict and as such can have dramatic effects on the markets.

Economic/financial and most political data is released at pre-defined times during the month and are in the online calendars, often categorized as to have a high, medium or low impact on the value of its associated currency compared to others. In some ways, as the information is scheduled well in advanced, they are easier to deal with than random events. However, they still should not be underestimated because the price movement changes they produce can be extremely varied.

For instance, if there is a clear discrepancy between the actual and forecasted value, the market could select and then advance in its chosen direction generating a significant price change of the relevant currency pair. However, many times the market takes an immediate snapshot view of the release’s headlines and reacts accordingly by producing a surge in one direction only to completely reverse its decision minutes later after analyzing the details in more depth.

Sometimes a data release consists of a number of composite values - some of which concur with their predicted values whilst others do not. As a result, the markets can become quite chaotic, adopting one opinion initially only to reverse it completely, hours or minutes later. Consequently, a false direction is often chosen just after the release that could be altered dramatically sometime later, after the markets have settled on a truer meaning of the release’s data. Another aspect which should be taken into consideration is that some of the major market players might not agree on the forecasted value vs. the actual value and the impact it should have on a specific currency. Hence a specific currency might go down in spite of good news or vice versa. As a result of these many complexities and nuances, it is difficult to cope with the vast permutations of price movements that can be caused by fundamental data releases. This is why many shy away from these events in order to protect their capital from being desecrated by the explosive price movements which can and often do occur.

Beginners, in particular, seriously overestimate their abilities in dealing with fundamental events falsely, believing that they can successfully predict their outcomes. This is because their trading psychology is flawed in many ways that contribute to their erroneous actions. They have a tendency to ignore downside risks and focus on potential profits only. They believe that each new trade that they enter will make profit and fail to understand that they will be more successful if they adopt more sensible objectives. Their high profit expectations often lead to a demoralizing effect on the morale after they have amassed only a string of losses.

Fundamental data releases can sometimes produce dramatic price movements for currency pairs although the reasons for doing so are far from clear. The resulting changes can persist for some time, giving traders the impression that the market is on a run. However, this is no reason to enter trades, especially if you do not understand fully what is happening. Unfortunately, many beginners do exactly this.

As you may now have grasped, all investors should be very wary of fundamental data releases because of the enormous risks that are associated with this type of event. The idea seems obvious from the beginning. If you could learn to interpret these news events, you could do very well. However, I simply don’t believe it is ever possible to determine the market movement to one single event.

There are so many dimensions which should be added to this picture, in order for it to make perfect sense. You will maybe have the chance to get the numbers of the news you are looking for, but not all the other important aspects. The only thing that is predictable about forex trading is that it is very unpredictable. With that being said, it does not mean that you cannot profit from it; you simply need to take the right approach. This will be discussed in chapter 15.