A favorite Forex saying is "the trend is your friend". In other words, if you trade with the trend then you have more chances of selecting winning trades. The idea is logic in that you "go with the crowd".

However, a very popular forex trading strategy involves "picking bottoms and tops". This trading method normally involves using a technical indicator to determine trend reversals. More specifically, traders are searching for positive signs that either a bull buying channel is about to top or that a bear selling channel is about to bottom. The idea of pursuing such a strategy seems obvious in that the sooner you can pinpoint such an event, the more profit you can make following the reversal. However, top and bottom picking does seem like a dangerous practice on the surface because you are about to pit your skills against the entire forex market which is moving in the opposite direction; this is often referred to a "trying to catch a falling knife" in the sense that you are likely to cut yourself. 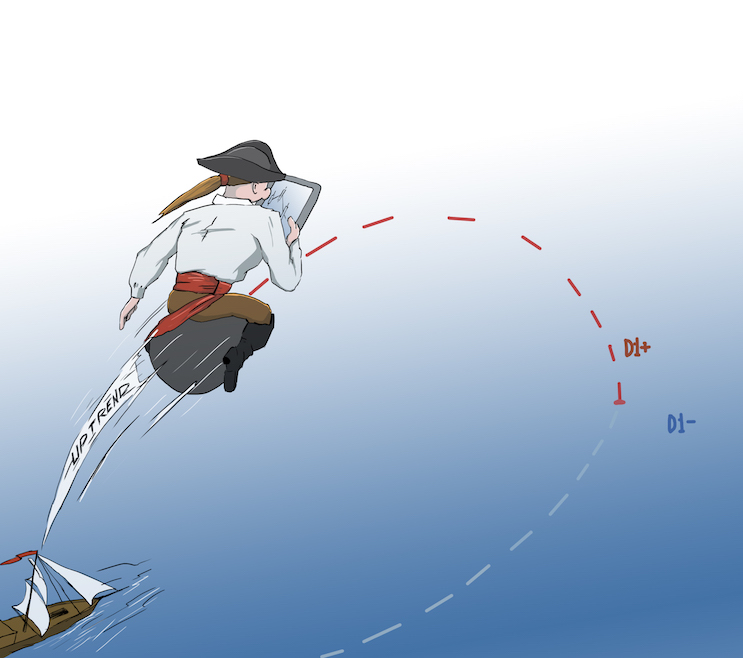 The aim of this chapter is to show your how to console these two important concepts, and finally a short example with the essential parts on how to approach this. To do this, we first need to consider and define some basic concepts.

Most traders consider that a trend is a predictable price response defined by bull buying or bear selling channels which can exist for some time. A new trend is quite often born when the market price breaks through either a support or resistance level and reaches new lows or new highs respectively.

When you attempt to detect the top or bottom of a trend you are embarking on a complex and quite dangerous exercise since you are about to trade in the opposite direction of the market. However, many traders still attempt to master this technique because the rewards can be so great. In other words, many traders are prepared to accept the high risks associated with 'picking tops and bottoms' because of the tremendous rewards that are potentially available. The mental attraction is that if they can detect a top, for instance, then they can ride the selling channel down to achieve a considerable profit.

However, if you are going to accept such trades with a high level of risk, then you must perform this strategy correctly. Obviously I am not talking about "risk" in the sense of money management, but more so, that the trend is more likely to continue than to reverse. This implies that you should apply appropriate money management. So when you attempt to locate a top or bottom, you will engage a large risk factor as you are about to trade against the entire market. Hence you must be skilled in detecting a possible reversal, and manage your risk:reward accordingly.

As a result, fear often arises which can produce significant negative psychological effects that cause you to snatch at quick profits e.g. 50 to 100 pips after entering a trade once a possible top or bottom has been formed. The reason for this action is that knowing that you are swimming against the tide makes you fear that the market will suddenly reverse back towards its original direction. However, this is a bad trading practice, especially over the long haul, because you would be subjecting yourself to intense risk without letting your profits run when there is a good chance to ride the trade for a long time.

So, in order to be successful with this technique, you must commit yourself completely to its inherent concepts. As such, you must be prepared to steel yourself and let your profits run (risk free, if possible) until the channel shows signs of exhaustion. By doing this, your trading strategy will enjoy a good risk:reward ratio over the long haul, which it would not do if you continuously snatched at small profits.

Of course, if you do encounter a true reversal pattern, then by all means exit your trade. However, if you are 50 to 100 pips in profit it might be a better idea to move your stop loss to break even, and let it ride.

Always bear in mind, that there is no sense taking a high risk if you are not prepared to realize the full potential of your possible reward. The idea here is that if you take a profit of 50 pips after detecting a top or bottom, the risk:reward seems unfavorable. If taking profits of these amounts is your goal, you will be better off trading with the trend.

The usual method used to detect tops and bottoms is to utilize technical indicators but as the two following examples show, this is not as easy as it sounds and prone to difficulties.

One popular oscillating technical indicator used to attempt to detect reversals is the relative strength index, or RSI. One strategy using RSI recommends entering a buy order when the RSI crosses below its 30 line, forms a bottom, and then crosses back up through 30.

Similarly, a sell entry is determined when the RSI crosses above 70, forms a peak, and then crosses back down through 70.

Trades are exited ideally when the next opposite buy/sell condition is encountered as just defined. RSI is a very good indicator for identifying entry and exit points for both simple and complex trading systems. However, you must pay careful attention when solely using a technical indicator as a strategy, as the following problem frequently happens:

Traders may need to monitor and even change stochastic settings constantly in order to adapt to the ever-evolving market conditions with the intent of minimizing the number of false signals. Again, there are more problems to consider:

The stochastic would respond very slowly to such events and as a consequence fail to advise you quickly enough that you need to consider corrective action promptly. In addition to this, both of these indicators, along with all the others, fail to respond to macroeconomic events, which is definitely a must when trading the forex market.

What about trends? When attempting to detect and confirm trends, many traders use the directional movement indicator, or DMI, to help trade trends. The DMI minimizes the guesswork in spotting trends and helps in confirming trend-line analysis. The DMI system has two parts:

One strategy recommends following the extreme point rule to confirm the signals. The extreme point occurs in the period containing the crossover. Only if that extreme point is breached in the subsequent period, is a trade signal confirmed.

When the price does fall below the parabolic, this signals an end to the trend. Again and in the same way as the RSI and stochastic, the DMI is prone to errors and inconsistencies. So, how do you improve the probability of making predictions using one of these indicators as a central concept of your forex trading strategy? First of all, you must grasp the fact that it is almost impossible to predict the next movement in the forex market. In fact, the best you can hope for is gaining an accurate handle on the probabilities of the next move.

You will soon realize that you can only develop profitable forex trading strategies through your own hard work which will undoubtedly include the study of other people's forex experiences.

Over the years, many traders have designed a vast number of forex trading strategies that have enabled them to select entry and exit points to their trades, allowing them to achieve varying levels of success. The key objective of a standard trading system is to accurately determine the entry and exit points of bear and bull channels that extend for days if not weeks.

In a broad sense, the forex market tracks the stock market, which in turn, responds to global economic movements. When the Dow Jones Index rises, the EURO and GBP tend to rise whilst the USD and the YEN tend to fall. Conversely, when the Dow Jones Index falls, the USD and YEN rise whilst the EURO and GBP fall. As you undoubtedly know, the stock market tends to fall in response to "bad news" whilst it tends to rise on "good news". Forex analysis is used in order to design trading systems and consists basically of two elements which are fundamental analysis and technical analysis. Ideally, both should be used in combination to grasp a better understanding of the market, and possible trades. An example of a trading strategy that could be used to both track trends and detect tops and bottoms is as follows:

1. Locate economists who have a good track record in predicting events that affect the stock market e.g. Credit Crunch.
2. Compare their fundamental forecasts against technical data, such as daily/weekly charts, for synergy.

This is best done using the hourly time frame or longer on technical charts because their associated statistics are far more accurate than those of shorter time periods. In addition, they provide a much clearer overview of the larger picture.

You base your strategy on the indicators such as RSI or stochastic for bottom and top detection or ones such as the DMI for trend trading. Note that in either case, the indicator is not being used just on its own but as a component of a complete strategy.

3. Any clear correlation, found during step 2, identifies possible entry or exit points for bear or bull channels.
4. If 3 is positive, then look for a possibility to enter a trade.
5. Monitor the trade for possible reversals and exit points using both technical and fundamental analysis.

In summary, technical analysis involves examining currency prices over a period of time to try and identify trends and their potential reversals by detecting tops and bottoms. For example, if the value of a particular currency has been steadily increasing over a period of several weeks, then it is likely that the trend will continue in the future, at least for the short term. If you can correctly identify a trend, and trade in the same direction you are likely to make profitable trades. Also, the earlier you can identify a trend‘s reversal, the more chance you have of making larger profits.