XTrade is a forex broker regulated by ASIC (Australia) and IFSC (Belize).

Trading is powered solely by XTrade proprietary trading platform accessible from the web and mobile devices.

Please read XTrade Reviews below and share live trading experiences with this broker.

Forex Brokers Crypto Stocks CFD - Contract for Difference
July-December 2021:  Large numbers of fake and highly suspicious positive reviews submitted for XTrade, including one from inside the company's offices. 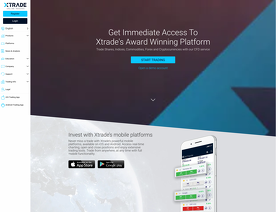 Maybe theres a ghost on x trade because suddenly there's a sell trade in my account and a demo account: MY ACCOUNT 38176044.... if you read this choose other Broker please!.. if you want screenshot and proof contact me
1 trader has found this review helpful
S
sanoj1981
Dubai, United Arab Emirates,
Oct 4, 2018,
Registered user

Guys .. Please this is true review about Xtrade.com . Please dont trust this company or invest your money in it . Its a big scam and they play very dirty game to cheat people and steal their money. So dear friends .. Please stay away from xtrade.com.

Aug 13, 2017 - 1 Star Please dont deposit your money with Xtrade . It is a fraud company . I lost all my hard earned money trading with them . Guys please stay away.
More. Community discussion of this issue >>
M
mrIT93
South Africa,
Apr 9, 2018,
Registered user
XTRADE is a scam , You can not withdraw your money if you want to. Its about 6 months now since I requested a withdrawal but nothing had happened. The customercare is terrible
2 traders have found this review helpful

I don't recommend them because they will not withdraw your money or profit , keep your money away from them
2 traders have found this review helpful
J
Josh
Qld, Australia,
Dec 28, 2017,
Guest
DO NOT use Xtrade . I've been waiting more than 6 weeks to withdraw money from account , support is non existent and f*** woeful when they do answer and give usual b*** answers like it's in process , takes 10 business days - it's been over 30 days and still no money . DO NOT USE XTRADE .
2 traders have found this review helpful

I dealt with their Russian speaking desk, first it was Anna Novikova. Then Zhan Rusov, who was pushing me so hard, advising me to TAKE A CREDIT IN A BANK AND HE COULD EVEN RECOMMEND A BANK - what a scam. His point was that after I deposit $1000 I would be able to withdraw this deposit within a week - maximum 2 (GUARANTEED) and then trade with what I would had left on my account. Also both of them, Anna and Zhan, said that there would be just one condition for me to be able to get profit - NOT TO OPEN ANY TRADES ON MY OWN! That was the condition. Of course I would not - I know nothing about trading whatsoever! So after I deposited $1000 i was assigned Aleksandr Nazarov to be my account manager. 3-4 lucky deals under his 'supervision' then my account went to deep minus. They changed my account manager - Alexandr Antipov, who said if i deposit more money he would do his best to recover my account - never happened too. I then deposited $300 not to lose what I had locked. Then I spoke to my friend who is a solicitor in this field and if you have been in the same situation I recommend to read this letter (below) and take what you can out of it. So I submit a letter to their compliance department asking them to return my deposit - they reinstated my account with virtual money to sit the draw down until price goes back to where I opened it (never happened it was EURUSD I had a sell at 1.08 something and it never returned to this level) so I lost it at the end.

Overall it was a long and stressful story. Just read it and take what you can out of it. If you had been given a fraudulent investment advice - find a solicitor in this field, complain to FCA in London, even if you are not there - it costs nothing to file a complaint there, but it costs a lot to a broker. Keep all recordings that you were given (emails, record telephone calls - also THEY DO HAVE RECORDED TELEPHONE CALLS, so if you were in the same situation as me, you or a FCA can request them. They might give you many many reasons why they cannot have an access to them, but when they need it - they find it within 5 mins - personal experience).

Also, when you ask your account manager WHY he gave you wrong advise, which happened every single time after i filed a complaint, they think it is fine to call you back and start screaming his a** off at you and then put the phone down.
It was a VERY bad experience with this company.
Letter(main part):
ON Monday, the 8th of May 2017, I received a call from Aleksandr Nazarov who told me that I need to deposit another $2000 to be able to trade commodities and where I can earn 'real' money. He also offered me to borrow this money. I refused. Then we opened a first EUR/USD deal, I got some profit. Then another 3-4 deals were profitable. On the 12th of May he tells me to open a $50 000 EURUSD Sell trade. Which I did. It went to $-220, then $-400, $-700 and so on, now it is $-1400. I was emailing him each time it went more in minus, he would say to wait, wait, wait and that it should go down soon. So I waited and waited as was advised by Aleksandr.... until my equity shrinked. Now I only have $100 equity. Positions still opened - you charge me fees every day to keep them open and he said I need to wait until he calls me and not to do anything about it. I am still waiting....

Now I have three positions in my account and my LOSS is locked there. And yesterday Alexander called me, saying that he has spoken to analytics and they came to a conclusion that I need to deposit more money in order to save my accont from the state that HE got me into! This does sound like a scheme...

My complaint:
You are neither authorised nor qualified to give any investment advises. Your company is a broker, not a financial advisor. You do not have any license for giving finincial advices. I have no knowledge of FX markets whatsoever and you abused your position by pushing me with fake promises to deposit money, then to open the trade, which was initially not in my favour, as well as pushing me to take the maximum leverage since the commissions are higher (for beginners there should only be a leverage of maximum 1:25 and at no point 1:400), Now I have 3 positions opened where you charge me fees daily but no one tells me to close them, as you get your fee daily on them - very dishonest! I have our correspondence with Alexander where he 'advises' me to keep the trades.
I want you to reimburse my deposit of $1000 either to my account, so I can withdraw it or right into my bank. If you do not do so, I and my solicitor in London will report you to Financial Ombudsman in London, FCA, CROFR, Naufor and CySEC and any other institution we find relevant to this case. We will start with CySEC as they still passporting a financial service from Cyprus to the UK And you still broker to the Financial Authority Code of Business.
1 trader has found this review helpful
P
peterhu
Germany,
Mar 1, 2017,
Registered user
I got heavily robbed by XTRADE. I read a lot of complaints about XTRADE on FPA. However, there is no information from somebody who successfully got his money back. If there is someone, can you please tell me if and how you got your money back? Was it via a legal case in Cyprus or your country of origin (within the EU)?
B
Brony
Riga, Latvia,
Feb 20, 2017,
Registered user

They're scam.
They give You "analytic" who is going to help You. He use nice words to let You buy or sell pair. But in fact they just say randomly making everything, for You, that You could lose as fast as can.
1 trader has found this review helpful
R
Ramin123
London, United Kingdom,
Jan 3, 2017,
Registered user

STAY FAR AWAY AND KEEP YOUR MONEY AND YOUR INFORMATION EVEN FURTHER AWAY!!

XTRADE HAVE BEEN FINED EUR 225,000 for scamming people! WE NEED TO GET OUR MONEY BACK OFF THEM
A
advent
United Kingdom,
Nov 6, 2016,
Registered user

Xtrade cannot be trustsed you will lose your money

Stay away from this company - join the class action group if you have been
scammed.
They continuously do the same actions - they were recently fined for xforex same company and its documented Elana Solomon worked for Xforex and Xtrade and nothing has changed. I have made a video about them on youtube just type xtrade it comes up in the first page you will see it xtrade scam review over 80000 views so far. Please view and like it

Oct 18, 2016 - 1 Star I am starting a class action against Xtrade if anyone is interested with Phoenix Advisors - get in touch

Sep 22, 2016 - 1 Star can anything be done to recover losses and money with this company - any class actions?

they gave advise that made you lose