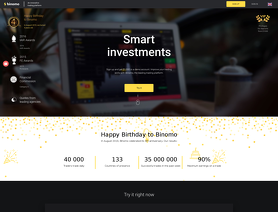 Forex BrokersBinary Options
2020-07-01:  The Brazilian CVM (Securities and Exchange Commission) has stated that Dolphin Corp, at website binomo.com/br, is not authorized to seek clients in Brazil.  The CVM has ordered the company to cease trying to attract clients in Brazil.  CLICK HERE for details.
February-September 2019:  Multiple fake and highly suspicious positive reviews submitted for Binomo.
2017-12-18  The Spanish CNMV has issued an unauthorized firm warning against Binomo.com.  CLICK HERE to confirm.
⭐ Traders Reviews

Join live discussion of Binomo.com on our forum

Binomo seems to be a scammer

Although I submitted verification documents, they always answer me "your request has been transferred to security department" for 3 months.
I deposited 500 usd + 500 usd = totally 1000 usd, profit 3500 usd...
it seems that binomo don't want to pay back(withdrawal) to me.
delaying verification is a kind of way to prevent to withdrawal.
Binimo is a scammer, be away from it !!!!

Fraudulent company. They stole my money. Stay away.

I registered in the company normaly I did all the necessary verification of my account. I made a deposit. Deposit was only $185.00 approximately.
After making 5 trades in a one-month interval being one lose and 4 wins I was prevented from withdrawing my profit or at least my deposit.
After several days wanting some explanation for not being able to withdraw my winnings I was blocked and my deposit was confiscated.
They gave clumsy explanations and even then I wasn't able to get my deposit back.
Stay out of this company in my country hundreds of people are reporting the same problem.
Be warned a fraudulent dishonest and swindling company.
Only to lose that customers are welcome.

Looked interesting at first, until doing a more thorough research

So first things to "ring a bell" that something was off is that, on their Instagram page, you'd see a lot of complaints on pretty much every post they did. Plus there was this post offering a reward for leaving a review on their FB page. I mean, it didn't explicitly say "rate us 5 stars" or something like that, but the wording of it... I don't know, I'm just pretty certain that an honest 2 or 3 star review would guarantee nothing in return. Certainly a major red flag.
Another major red flag for me is "extremes" at Trustpilot, i.e. reviews always too good or too bad... This is in my opinion a hallmark sign of companies offering incentives to convince people to leave them a great review in exchange for something and/or people who work at the company creating multiple profiles and giving them fake 5 star reviews - and I said this 'cause that's simply what I saw there, either the company was fantastic or you'd see these countless 1 star reviews accusing them of being a scam and so on.
Then, their website is just... shady. What assets do they offer? What platform do you trade on? And so many other things that you'd certainly expect to find out on a broker's website are simply non-existent in theirs.
Finally you see how many countries they are not allowed to operate. Never seen a broker prohibited in so many countries, that was really impressive - and yet, Brazil didn't figure within that list, plus they even accept deposits in BRL (Brazilian Real)! That sounded great, right?
Well... Not really: as rightly pointed out by FPA great team, the Brazilian Regulatory Authority (CVM - Comissão de Valores Mobiliários) did indeed issued an alert (Ato Declaratório 17.942) and determined, effective immediately, that this company should cease doing any Forex investment offerings in Brazil, either directly or indirectly, and failure to do so would result in a DAILY penalty of R$ 1.000,00 (yeah, too little - only USD200 give or take... but still, the agency went beyond just issuing the Stop Order).
Last but not least, CVM has asked anyone approached or offered to invest/trade in this company in any way to get in touch immediately in order to enable them to act faster. Since this only applies to Brazilians, I'll just write down below precisely what the agency said and, if any fellow Brazilian sees this, please do your bit as well since they not only continue to unlawfully attract Brazilian investors, but they even offer BRL deposits, thus making them even more attractive to non-informed or inexperienced traders/investors.
"Caso seja investidor ou receba proposta de investimento por parte da empresa, entre em contato com a CVM por meio do Serviço de Atendimento ao Cidadão (SAC). Informe o máximo de detalhes possível sobre a oferta e a identificação das pessoas envolvidas. Com isso, a Autarquia poderá atuar de maneira mais rápida e direta no caso."
P.s.: FPA's link for some reason didn't go directly to the agency's alert/suspension order, but instead it just open the page with all news (in other words, anyone not fluent in Portuguese would have a hard time finding the specifics in this case). Actually, the link probably was right back in July first, but then changed, so here's the updated link (and it's a link to the complete news report, so it shouldn't change/go offline as they keep stored for several years, even decades):
https://www.gov.br/cvm/pt-br/assuntos/noticias/cvm-alerta-sobre-realizacao-de-oferta-irregular-no-mercado-forex-15194f1040c7472c874973c571bebb9a

Reply by BinomoOfficial submitted May 11, 2021:
Hello.

I have been trading with binomo for about 2 years. I made my fair share of losses and wins and in the long run for about some months had 10% in profit overall. I then started trading tournaments. I made a live trade turning 300 to 3000, when I asked for a withdrawal they denied asking me for verification that I had completed at the beginning of the first month of the account traded.
The worst part which is yet to come is when I had a trade which I won and the stats are there, but they counted it as a loss, twice, it’s like when you are winning in a row, they take advantage of last second manipulation. I mean I had to find another broker.
I have photo proof if anyone requires as well as the support emails.

Reply by BinomoOfficial submitted May 11, 2021:
Hello.

I wish i had read this review before committing my tokens but lesson learned. Im awaiting my withdrawal and that is it.
if you deposit from South Africa, less than R150 into your real account on binomo app, the money would be debited from your bank account but wont reflect on your real money account.Like i said, Ive learnt my lesson and just awaiting my withdrawal. Not recommended if you genuinely want to invest and trade.

Please, specify why do you think so or what happened ?

security glitches in the platform

Not a safe platform when comes to got security glitches,
For binary options trading it seems like a good one, but what good is that when your money is not safe? you can make or loss money, just like gambling better yet even or odd game, if you got some technical analysis, you might win some money here, but the interface itself is not safe and has security loopholes which can be simply used to withdraw the funds to a totally different non registered id. I’ll explain clearly how and because this has happened with me and this is true.

The problem with their security(READ FULLY):

The amount withdrawn should be credited to the same account through which it was deposited, this is what they claim on the payment gateway page,
But-
Someone could withdraw the amount in my account using a completely different email id (not mine) registered with GLOBEPAY.
I have used tarun******@gxxxxcxx to register on BINOMO. There is not even an option to change the email id, once it is registered until you write an email to customer support and the phone number can be changed any number of times ( I don’t know why they gave that option!!!)

This email Id (AMANLAXKAR7600@GxxxxCxx) registered with GLOBEPAY was used to withdraw funds, and their security system has processed the transaction without even crosschecking the credentials.

I have reported this to the BINOMO customer support within half an hour, but they couldn’t stop the transaction from processing. Scammers are using this simple glitch in the website to loot the money. May be some insider has sold this glitch to fraudulent people, who knows, just saying. I think even Globepay is somehow linked in this, I have tried to reach them through their customer service number but they never answer.

Reply by BinomoOfficial submitted Nov 26, 2020:
Hello!
We are very sorry that you are in such a situation. We want to assure you that Binomo does not take part in any fraudulent operations, our system is clean and transparent.
Write, please, the ID number of your account or the mail associated with your account on Binomo so we could understand and try to help you in this situation.
Thank you for contacting us.

It is not really a scam

This is my real experience for Binomo. at first, I lost around $400 in a blink of an eye. Some months later, I tried it again. Deposit only $10 and I get $35 in just three days.. Well, it is not much profit but I know the tricks now. I learn from my previous mistakes. I try to play safely and carefully, not aggressively. And I dont play more than 40 minutes to avoid any emotion swing..

I learn from mistakes, it is not really a scam if you know the tricks
1 trader has found this review helpful

I tried the demo and note:
I actually lose but they let me win!!! The winning BO order is just 0.001 difference in the price.
It is a trap!

Our Company is not a scam. It was founded in 2014. We are a reliable certified trading platform and also a member of the Financial commission.
We want to assure you that there are no deceptions on our platform.
Please see the strategies that you can find by following the link.
https://binomo.com/en/information/strategies
We hope this will help make trading easier and more convenient for you!

Specify, please, what exactly do you mean? What is the reason of your question?
Sort by:
Show: