0.949 · 25 REVIEWS
Is this your company?
Forex Brokers
CFD - Contract for Difference, MetaTrader 4
November 2018:  There is an FPA Traders Court guilty vote against this company.  The FPA recommends a high level of caution dealing with KayaFx unless this issue can be resolved.
March 2018:  The UK FCA has issued an unauthorized firm warning against KayaFX.  CLICK HERE to verify.
Related sites include NovaTrades.com 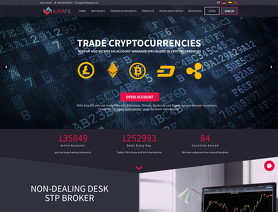 Join live discussion of KayaFX.com on our forum

Kaya FX scam exposed here the video this video shows how they always find new excuses to blame the customer why the account crashed after the withdraw request they even admit that they stopped working after you don't want to invest further this company is a complete scam that doesn't even trade they steal your money soon as you transfer it its a scam beware!

hear the video from the english conversation https://www.youtube.com/watch?v=bVci39UwonY&feature=youtu.be

and here the German one https://www.youtube.com/watch?v=bVci39UwonY

May 22, 2018 - 1 Star Now almost 2 weeks after the last call from Kaya FX I didn't hear anything from Philipp, Brian, the support or anybody. I'm still waiting for my money but nothing so far, maybe they are all busy to set up Dojo FX and need to make up new names and stories for their brokers.

I will keep you all up to date if something happens and if I get my money back from Kaya FX / GammaTech.

May 16, 2018 - 1 Star Last week I was called by Brian, another guy from Kayafx. He tried to blackmail me, I should cancel the recall from my Bank, otherwise I do not get any money back. Philipp Schmidt, who was my broker, interrupted the call several times and defended all what he had done with my money ( lost of nearly 18.000€ ). They talked to me 1h, 30 min.
with no result. They persist that it was just bad trades and they didnt do anything wrong. It was all my fault, because I didnt want to invest more.
When I wanted to withdraw my profit, they scammed me the same way the other clients were scammed: they burned my account. These people stole my money and they are still trying to find reasons, that it was my own fault. Philip still wanted me to let him work as my broker, but after what had happenrd that is a effrontery.

Apr 10, 2018 - 1 Star I already made a complaint at the police. If all victims of their scam do the same, there must be a few hundred complains, so the authorities have to react, before they disappear with all our money.

Apr 9, 2018 - 1 Star Please publish the name of your broker and try to describe him, e.g. something remarkable about him, did he have an accent, … My broker, Philipp Schmidt, talked to me in German with a Turkish or Arabian accent.

Mar 31, 2018 - 1 Star Kayafx is a big scam. First you get a call. In my case it was Philipp Schmidt, who is the senior account manager and head of the German desk. He introduced himself: 42 years old, divorced. His mother is a German, his father is Arabian. He tried to get my confidence. Then a promised me high profit, but he needs more money to start.
At the end of the call he had 2.000 Euros from my credit card. Some days later he wanted me to install anydesk, so he could lock into my PC and do all necessary steps without me. I did not do that. - After the first week I had really made much profit. Philipp said I should transfer 20.000€ for an event. that was 100% safe. I transferred 16.000€. At the same time I filled a withdraw request, to take some money back, but I did not get this money. I filled a second, a third, a fourth
request. Without any success. I complained. Philipp talked to me in a never ending long call, but there was no explanation for the missing transfer. Instead he wanted 30.000€, and he was pushing me to transfer it fast. I did not transfer more money, so he did not make a single trade for a week. He did not answer the question why he didnt do his job as a brooker and let my money get more, instead of always asking me to invest more. A few days later when he recognized I really didn t transfer the 30.000€ he placed negative trades and started to loose my money. I told him, his colleague, the support, everyone to stop trading, but they ignored it. They even continued to place trades the next day. They ignored my order to stop trading, they ignored my withdraw request, when I tried to save the rest of the money. They stopped when my account was at Minus 2.700€.
And this is not the end. Although I lost 18.000€, Philipp wants me to trust him and transfer money.-
If you will be contacted by Kaya and they tell you that the people here are writing bad reviews because they are to stupid to do trading right or cant handle a normal loss on the market, or if you have any doubts that kaya is not a scam, please contact me. Do not invest a single penny.

Mar 27, 2018 - 1 Star KayaFx Philip Schmidt Scam Broker!
They do not pay any money back. I started with 250€. At once I got a call from Philipp Schmidt, the head of German counter to add several thousands more. I added 1.750€. With these 2.000€ I wanted to test the company. But Philipp called me each day several times. He talked and talked without an end. He talked about events that are bringing much money, e g. Fang. But I could not join with only 2.000€. At last he had 18.000€. I wanted to have the profit: 5.000 after the first week, 3.000 after some more days, ...Philipp sent me confirmations about the withdraw requests, but I never got a penny. I was alerted and told Philipp not to place any more trades, but he ignored my order. When I stopped to transfer more money Philipp burned my account. Every single trade was negative. I saw it on the PC and sent him a message to stop trading, but he continued and even continued the next day until there were Minus 2.700€. on my account. Since that time I did not get any call or message from he. He did never answer my mails.

Not allowing me to withdraw

I have over 14000 euros in my account and they aren't allowing me to withdraw. I'm not getting any joy. I've contacted them in every way and several times.

Prino,
South Africa,
Jul 24, 2018,
Registered user
I joined Kayafx and deposited 250€ I requested withdrawal 5days ago but I still haven't received it . I contacted live support after I swore them they've blocked me from the chats

DO NOT INVEST WITH KAYAFX they are a big scam….

If you are in any doubt. Please see the FCA website, they are now recognising KayaFX as the scam it is.

Jan 13, 2018 - 1 Star Unethical and immoral practices. Extremely aggressive selling techniques and practices. They push and push for more and more money. Profits initially look good, but the minute you ask about withdrawing the money they conveniently lose all your money. Scam account managers. Absolutely shocking.

Tomtom24,
South Africa,
May 5, 2018,
Registered user
THIEVES!!!!!! KAYA FX IS A SCAM!!!!
These guys, DEAN ERMAN and BRIAN THOMPSON took 6500 euro and then refused to refund it. They opened a series of unauthorised trades for about 10 - 20 second each and then closed them. If someone knows where they are, let me know...........I really want to go there because they are very cocky on the phone but I think they will shit themselves when you arrive at their door. They are cowards and thieves. NOTHING LESS!!!

Roberthuk,
london, United Kingdom,
Apr 30, 2018,
Registered user
kaya fx = rax media sofia Bulgaria they are not in the uk or Estonia !!!!!!!
few month ago I made an investment with kaya fx.
when I tried to place a wd they simply got into my my account, change my password and lost everything without my permission .
I found out that kaya fx is not in the uk!! the company real name is rax media
and they are working in Sofia Bulgaria
please help me to get my money back they simply stole my money .

I am as in the many contributions also. A Mariette called me Novak and told me that she was now my manager and that I could fully trust her. After I had transferred 250 euros I should transfer 2000 euros, so that a profit is worthwhile. At the beginning, profits actually increased by 20 percent. Then I got a call from her at the beginning of February, I was supposed to invest 10 000 euros. I refused and from then on Marietten Novak was no longer available for me. My account stayed on this stand. On 3.2.18 I ordered the withdrawal of my account. Nothing happened. There was a call from a Hughes I did not understand. On 5.3.18 I ordered the payout again. To this day, despite many reminders, nothing happens. Since then, however, the money in my account is less and less, even though no trading takes place. So all scams.You should warn the public more about Kayafx and other traders.

they don't pay me out. 2800€
waiting more than one month
withadrawal was allowed.
no answer
acount inactiv and amount zero
thank you!

Absolutely rubbish and would rather just have my money back which could of gone on something worth my time.

If your thinking of trading with Kaya Fx, don’t waste your time or your hard earned money, they are fraudsters and have no morales.
I deposited £250 on the potential prospect of earning some extra money.
I had no communication from them, all they did was constantly phone me at inconvenient times and nothing but a barrage of harassment for me to take out a loan to boost their credentials (which they don’t have).

I requested a refund and I received an email informing me that my request would be met within 7 days.

This was not completely true and I have been back and forth trying to get my refund.

I’m so frustrated as I’m at a breaking point with this company and now have violent tendencies in my mind on what I would do and I don’t want to think like that.

But they were quick to take my money and now they don’t want to honour my request.
Marlon London trade, keep your money.

The authorities in Estonia need to take control of their company and refund everyone who was mislead by this sham of trading company and have their license revoked.
Sort by:
Show: