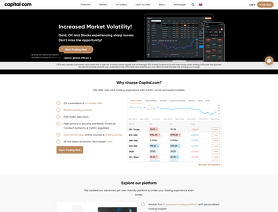 Join live discussion of Capital.com on our forum

I contacted ToolTrades after reading online reviews about using its Forex Signal service. Its condition was for me to open several accounts (minimum deposit of USD$250.00/account) with their key broker partner, Capital. After some hard sell attempts by several of their salespeople, I stuck to my guns and said the Basic Plan of Seven signals per day (indefinitely) with one account was good enough for a start They tried to con me into opening more accounts after one week (by cutting off my signals) claiming that my Trial Plan was over. I got into it with them and proved that nowhere in their chat transcripts did it say it was Trial Plan with a 7-day limit to its signals. After threatening to go to Forex Peace Army and other Forex forums with my grievance, the 7-signal plan was reinstated as long as I had an account with Capital. Capital’s web trading interface just wasn’t working for me as I’m used to MT4. Also, I wanted to document my trading with MyFXBook and run additionaL EAs, which its account manager said I could not because I needed MT4 or MT5, which it does not have. So, on, Jul 22, 2020, I wrote to Capital to close the account and withdraw my full balance of US$274.77. That is when the runaround & dirty dancing began by Capital. I have documented emails of all I am stating here. First, it wanted a photo of me holding the Debit MasterCard I used to fund the account with only the first six and last four digits showing. When I sent it after cutting out the middle numbers as instructed, I was told that graphic editors could not be used on the photo, which was not relayed to me at the onset. After that was sorted out, next it insisted I show a card statement showing my Name and MasterCard number. My two Debit cards, Visa & MasterCard, are tagged to my savings bank account. I do not have separate statements for the savings bank account, Visa, and MasterCard. They are consolidated into one online statement. I forwarded that to Capital in three parts, the savings bank account with clear transactions involving my two cards, the statement showing settled card transactions (with the actual proof of deduction to Capital), and the Pending MasterCard Transactions done on the same day of writing the email. All were rejected now with the claim that my Name and MasterCard number were not together on a single document. I wrote back showing with pointed Red Arrows that they do appear right on top of my Pending Settlement page. Now that the game was up, it changed tack. Now I was told to initiate a withdrawal to my bank account. This was because when Capital attempted to refund my money back to my funding method through MasterCard, the transaction was rejected by the card issuer which also happens to be my bank. My bank denied this ever happened. So, I attempted to request for the withdrawal but when I logged in to do that, I had all the necessary info except for an IBAN number which is not used in my country or region. Proof of this is on my bank’s website with an explicit statement that all the Sender needs are a SWIFT Code and the beneficiary’s (me) details. I send the link to Capital. This went back and forth a few times and finally, it ended the matter by saying if I didn’t get a bank statement with 1) Name of my bank, 2) Swift code, 3) Account number, 4) My name as written on the bank account, together in one document, Capital would not initiate a withdrawal and will just close the matter holding my money indefinitely. I contacted my bank and forwarded this weird email request for which I was promised such a document within the next few days. The interesting point during the entire exchange is that I was reminded by Capital that if I didn’t get the documents it wanted, it will cancel my closure/withdrawal request. I forwarded Capital the email I sent my bank requesting for such a document and promised Capital that the regulatory bodies licensing it & all other Forex forums will hear of its underhanded tactics no matter what the outcome. Capital has since remained quiet and it seems I have lost my money forever. So, fellow traders, be cautious of ToolTrades and most definitely, be very, very careful of Capital. There must be some way to punish such fraudulent outfits from conning unwary traders! I will write to the regulatory bodies of Capital. I don't know if Forex Peace Army could do anything to help.

Avoid this broker I have try to withdraw my money. No support at all long pending withdraw. Fool company

On the 5/6/20 l had a position open on capital.com platform The position was Dow Jones .. l had sold shares with Dow Jones and l was alerted too add more funds .. l was - 396 pounds therefore l was about too invest another 400 pounds too cover my position .. when l pressed on funds my 396 pounds mysteriously dissapeared .. l have had no contact with my accounts manager despite sending numerous emails and at tje time of the money 396 pounds l called them more than 35 times too no avail. This is not the first time l have been scammed by this company capital.com scam your account very sneaky too hide the fact they are scammers. I have reported this too FPA l am determined too get my money refunded.

Jun 5, 2020 - 1 Star I joined Capital.com this year 2020 .. l was on there platform today in my P&L l had - £390 .
The automated system alerted me too deposit more money .. l pressed on the deposit button too deposit more money. Then l noticed that the P&L was no longer showing and the £390 had dissapeared .. l tried contacting the company by phone 36 times and got no answer l sent 10 emails too no avail. There is no support from capital.com l dont know were my money has gone however capital.com now has too explain how and were my money is. I have emailed capital.com for a managers address. There support is nil. Margo Austin

ID 53679815 , amount USD 450 , I request withdrawal on Nov 24 2019 . I send about 30 emails to chase the company to process.
But they claim it is not their problem. It is the problem of neteller which I use this method to withdrawal. They claim I need to wait for the reply from neteller.
But already 1 month passed, no reply

I still have USD 229.86 in my account
1 trader has found this review helpful

Good app! (I forgot to say I work for Capital.com)

Seamless order execution, a great tool to make profits on the market swings. I’ve been trading with Capital.com for a while already, and I just can’t get enough. They care for their users.

This review did not come from London.  It came from the same location in Belarus used by an employee of Capital.com at the FPA.

Per FPA policy, the rating on this review has been set to Zero stars.

The FPA does not appreciate review spammers.
Sort by:
Show: