The RoFX.net is a forex expert advisor. The RoFX automated trading software places trades for you. The RoFX.net forex robot can trade bitcoin. 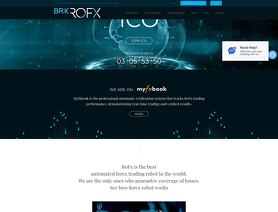 Join live discussion of RoFX.net on our forum

I started 2 years ago and have made 10-15 withdrawals from $1000 - 10 000 in that time frame with no problem.
I am hoping everything pans out so that I can retire and start enjoying life again in about 12-36 months after my account has grown from the daily compounded interest (advanced package) I have referred a few clients to the program and talked to several clients and they are all very happy with this software. I hope I can continue to bless people with this until my time on earth i done.

Rofx.net and Ester broker are a scam. They are cooperating with Ester broker and every day they produce fake trades for previous day.
This is a supposed service offered from them, but has exactly the same trades with Rofx.net.
They have offered to me, these trades to be copied on my MT4 account. All I had to do is deposit $14,000 to that account. As soon as I did so, I have asked to start copying these trades on my account.
In addition, see attached daily reports which shows that they are doing post-trade adjustments to trades, in order to show them as profitable (they reverse order type from BUY to SELL and vice versa). When I stated this on emails sent to them, they have replied with no-sense excuses, that my account is virtual, that my money is saved on their master account, and that they could do so, for my benefit. I have the email correspondence with them as a proof.
As soon, as I realized their scam, I have entered a withdrawal request for all of my money. The day after, they have produced around 500 fake trades, with big lot size, and wiped-out my account. Of course, these trades were not real. They have produced them in order to steal my hard-earned money. I have complained several times to them, and their response was that was due to a technical error of their EA, and they would take care of that. I have asked for my money back, but they were giving only promises.
As soon, as I threatened them that I would report Ester and RoFx for their scam activity, a guy, who presented himself as the Ester’s finance head manager, called me from London, from RoFx call center (I know this number because I have called RoFx a couple of months earlier for more information about their service), and tried to blame me that it was a risk that I took while I traded on forex, and they could not give my money back. He also offered me to deposit even more money, in order to invest in another system, they have. I denied to do so, but I lost my hard-earned money, and I cannot do anything about this, except telling my story to the people out there, warning them to stay away from RoFx.net and Ester broker. Bear in mind that Ester broker regulator cannot do anything about this.
I am at your disposal to present to you in a private chat, names, telephone numbers, even more screenshots, and MT4 daily/monthly reports which verify my story above.
On 5th August 2020 they intentionally created loss trades that wiped out my account - See file above "Statement - after fake loss trades - 21082020.pdf". That occurred immediately after placing a withdrawal request to get my $14,000 back to my bank account. As stated above, these are not real trades, but created only as an excuse for not returning my money back. Unfortunately, this can be done on a MT4 server. That's why Rofx.net trades are a scam.
Please stay away from Rofx.net and Ester broker. They are nothing more than a gang who cheat people.

1 trader has found this review helpful

ROFX is Incredibly Easy and Profitable Venture for Me

I started with ROFX two years ago with apprehension since it is financial membership rather than a brokerage account but functions similar to a PAMM. They have multiple types of accounts to start with and it is easy to deposit and withdrawal. I have only done Bank Wire and BTC deposits which both worked well. I have only done BTC withdrawals which occur within 24 hours and longer if submitted over a weekend. My only suggestion to ROFX is to have more videos available to gain trust earlier with clients. I started small with only $400 and my accounts have only grown since. With any PAMM like product, you have to gain trust over time and that is my recommendation for future investors.
2 traders have found this review helpful

So far so good

I have invested $10000 and waited a year (invested in bitcoin) After a year I had $23,000. I removed it all from the rofx no problems and then invested $100,000. Its locked in until June, and then I'll do the same thing again, will try and remember to post again the results.

at the moment works for me

I started using rofx since July 2018 with the minimum of 1000 euro withdraw principal and gained part,with some difficulty due to my bank, but at the end rofx team helped me with what was necessary to recover the money. at the moment I invest in btc and 2000 euro that give something between 3-4% per month. the only and most important thing is the little transparency and mystery about founders and documentation of the company that makes me stop to invest more money. investing about 10,000 can get a return between 5-6%.
2 traders have found this review helpful
Sort by:
Show: