Please read 12Trader Reviews below and share your live trading experiences with this broker. 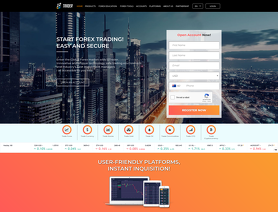 This is a big scam

Service use: Live Length of use: 3-6 Months
I deposited 2000$ and I traded until it comes to 2600$. I made a withdrawal of 2000$, they took 2 weeks to transfer my deposited amount to my Skrill wallet. After that I decided to withdraw all from this company. Remaining amount of 600$ still not send to me, account history is showing I have lost my account with 600$, but actually I didn’t put any of trades in those days. They pushed me to deposit by running adds on Investing.com, they said they are the persons running that Investing.com also. Any how still not get my 600$, and it’s not pending they said company lost my account, how can broker saying lost my account by their hands. Try to understand . This is a very big scam.
C
Christian
Jena, Germany,
Jan 30, 2020,
Guest

Service use: Live Length of use: over 1 Year
Not a real scam, but extremely risky, incompetent, dishonest and without any proper strategy! Their strategy is: "give me more money to survive bad times!" It worked until I ran out of money at €69.500 - which is completely gone now!

At the start you get a "business plan" by e-mail and whatsapp from an "advisor", who claims to be located in London, but who is definitely situated somewhere in Eastern Europe. He shared his screen with me at one point and his local time was GMT+2 and he was off on Orthodox holidays. This guy called himself "Mr. Baxter", but this isn't his real name for sure. He'll offer to trade for you. I was very suspicious at the beginning, unfortunately not of his expertise, but because of the danger of being scammed. It worked quite well at the beginning. I was just a bit surprised by his lack of using stop losses. He explained, that it would produce too many losses.Then the first bad invests started and I had to provide him with more and more money. Eventually one Monday I received a message: "We had a bad bad Friday".It was just a move of €6 in WTI in the wrong direction, which caused a margin call and ALL positions were closed and the account was zeroed.The only solution offered was again to provide more money. So I even borrowed some. Result was the same! When I became bit angry about that, the guy even got cheeky! And I was never told that there was a risk of losing everything!The money was intended for my son education...Now, in retrospect, this can't work! You'll alway lose everything at some point.

So, if you don't want to lose all of your investment: Hands off!
C
Celeste
Secunda Mpumalanga, South Africa,
Jun 26, 2019,
Guest

Service use: Live Length of use: 6-12 Months
All and all depoited $65 000. Trades paid out very well. After 4 months an over $100 000 i wanted to withdraw funds. Then all of a sudden the one trade after the other collapsed until the whole $127 000 was gone. Broker steven is a smooth talker to milk you from your hard earned money. Beware of 12 Traders. SCam scam scam
V
Van-Lee Gunyere
Johannesburg, South Africa,
Feb 1, 2019,
Guest

LISA - Trader/Mentor, MOLLY - Compliance and COLLINS - Sales are not authorizing my withdrawal request for US$250

1) I am not happy with trading platform interface it has different exchange rate compared to other brokers,
2) Signals have high risk to reward ratio wrong signals to make you loose your money,
3) I can not get hold of COLLINS - Sales who used to call me everyday before I invested and who promised that I can withdraw from my money if I am not happy.

Please do not invest your money with 12TRADER.COM it is SCAM if anyone needs further information about this company contact me.
T
tahir
cape town, South Africa,
Jun 4, 2018,
Guest

12trader is for you

12trader is the best forex broker i have ever worked with and the best service are provided to me bu their consultants. vlad anderson will do his best to make you more money than you could ever imagine.
L
Lee Cheng
Hong Kong (Really the offices of 12Trader/CMSTrader in Bulgaria),
May 16, 2018,
Guest
I am working with this company for the past 1 year. They are providing me great help.
They teached me in the beginning and now providing me signals everyday. everything is working good, they are good company I recommend it for beginer and traders that want to improve.

12Trader and CMSTrader are related companies.  This review came from the same location in Bulgaria used in the FPA's forums by a representative of CMSTrader.

Per FPA policy, the rating on this review has been set to Zero stars.

The FPA does not appreciate review spammers.
Sort by:
Posting Date Rating
Show:
5 10 15 50