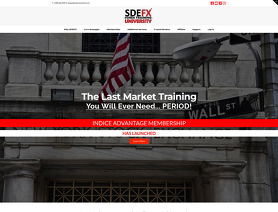 Join live discussion of SoDarnEasyForex.com on our forum

DO YOU RECOMMEND THIS COMPANY?
YesNo
Let other traders know if this service is worth checking or should be avoided.

Terribly LONG-WINDED, Over Complicates What Should be "SoDarnEasy"

Service use: Live Length of use: 0-3 Months
I joined his membership for something like $300 - $400 back in 2018. I was fairly green behind the ears and wanted to learn from who I thought was a forex trader worth the heavy price of admission.

I always thought, from the beginning, "Gosh. This man talks a LOT!". As in, it makes no sense how much he talks, but, still, his "live accounts" look real, and they seem to match up, maybe he "boils it all down to what you NEED to know, and gets the point in a simple, effective manner"

WROOOONG! He waffles on even MORE when you pay hundreds of dollars for membership. He has starter videos to get you going, but they all are 2 - 3hrs long.

The best analogy I can give you is church.

Ever went to a church service you KNEW could be over in 30 minutes - 1hr, but the pastor just runs his damn mouth for 2 or 3 hours?

That's Yusef. He gives sermons and likes to get philosiphical about trading, using endless stories, analogies and theory to make a single point, if he ever gets around to it. His reasoning for talking so much as I was told is that he likes to provide "value" and that "repetition helps students retain".

It's an unreasonable demand on your time and energy. The content consumes you, and you never know where to begin.

Now, I don't know if he's a scam trader or not. However, I do know now that there are actually really GOOD traders who make REAL money, but who are terrible teachers. It's rare to find a profitable trader who knows how to teach SIMPLY what needs to be taught...who just knows what "needs to be said", and nothing more.

Some people suspect he's a scam. I personally don't think he is. If his account is real, and he trades only Support and Resistance, and that's how he makes his money in the market with an overly simple concept that has no bearing with how the market actually moves according to banks, institutions and heavy investors, more power to him.

Lastly, to everyone considering his mentorship/training, watch ALL of his "customer review videos". It's VERY telling of the effectiveness of his training.

In virtually ALL (except maybe 1 or 2 instances), his students say things along the line of, "Hey Yusef! I learned SOOOO much from your courses. I LOOOOVE the membership, but I have to cancel it for now and re-instate later." Or, "I finally understand how the market works. It all makes sense now.", Or, "This is a solid course, I can SEE myself making money in the near future...only after I go through this mountain of training - haha!"

See the pattern? Not ONE review saying, "I made MONEY! I made $xyz. I'm KILLIN' the market now! I made $1000 in two days following your course!" None of that. I promise you. You will not see it.

In Yusefs mind, "successful students" are those who aren't making money but who "understand the ideas and concepts a little better than they did before". It's not "They MADE money", it's "Now they have POTENTIAL to make money". He sees membership cancellations and promises to 'return' when they can afford to keep up the monthly membership as "success stories", and he's just that vain and conceded that he doesn't view it as a failure, in his mind, he sees it as success.

He hasn't done testimony videos in a while, so maybe he realizes people will see the pattern of "non-success" and go "waitasec..." I wouldn't be surprised if he deleted them, but they are a reflection of the truth of his mentorship and how terrible of a teacher he is.

Last LAST point...from my memory, before it was known as So Darn Easy Forex, it was "Forex Babble". That was the name of his company. Let that sink in.

Service use: Live Length of use: Have not used
I watched a lot of the guys vids on YouTube. I just wanted to know his hedging strategies and get on his live training. I did not waste the guy time. I told him what I was looking for when we spoke on the phone.

I paid the guy $5,000 and after he was paid it was tough to get a response. I recommended that he creates a group for his customers so they don't have to wait on random emails about live training. The guy is super long winded and charges way too much. $5,000 for a lot of videos that repeats the same thing over and over. All these guys create regurgitated info. I already had skin in the game and need just a little bit of help from the guy. If people know their stuff it's not going to be hard to break it down. All the repeating things over in tons of vids. Learned more from $100 guys than Yusef who I paid $5k. Steer clear from these guys. Can't wait to master this so I can break it down in minutes VS tons of BS vids.

Service use: Live Length of use: over 1 Year
Like the other reviews on here I would suggest anyone to stay away from Yusef Scott. Unfortunately I got swindle by his marketing strategy where he shows his profits running on a Live account in social media. Sadly the MT4 platform can be manipulated and a lot of forex gurus use that trick to SELL their BS courses to students.
https://www.youtube.com/watch?v=Rkq9qb7eSDw&t=99s

The truth is that he only makes money from selling courses. He doesn't make money from trading!!! The information that he teaches can be found on baby pips for FREE! The only thing that he teaches is support and resistance with moving averages. All his "strategies" are basically the same thing. Do yourself a favor and save your HARD EARNED money!

Apr 15, 2021 - 1 Star Yusef seemed like a real genuine guy sadly it was all a front. Unfortunately when you don't know anything about the market, you do not see the RED flags! God only knows how many newbies he has dwindle for their money. TRUST me when I say this! all the information that he teaches can be found online for FREE! In addition none of the information will help you LONG term to be profitable in the market. The way he markets on social media catches a lot of newbies attention but if anyone knows anything about MT4 and unregulated brokers you soon realize that all the profit that he shows in social media is FAKE! FAKE! FAKE!
https://www.youtube.com/watch?v=Rkq9qb7eSDw&t=304s
If you were to ask him for any documentation showing his profits he wouldn't be able to do so because he doesn't trade himself. He only manipulates the MT4 platform to make you think that he knows how to trade so he can SELL his bullshit courses!!! and thats how he makes his money from SUCKERS like me!
Unfortunately it took me a while to see this and I lost a lot of money what these forex gurus are doing is inhumane and needs to be exposed!
BECAREFUL and STAY AWAY!

Only good for his own business

Service use: Live Length of use: 0-3 Months
I've been with his trading course in the beginning of his website in 2016. I bought the 'promising' perfect entry strategy bundle, because he shows you time after time how much money he makes in the market with this strategy. Unfortunately the package bought was real rubbish and only a video that explained how to draw (to many) sup/res lines. Although he promised: "nothing in this course will be left to the question". There were a whole lot of questions left to be answered. He teaches nothing useful among price action or patterns. Only that the market moves from one sup/res line to the other.
By then, because of his "confidence" in the market, I blew my account by holding on to a trade without any stop loss. I asked him once: "Why don't you use s/l" he answered: "I don't want to give ANY money back to the market"
Now several years later, I know the way he approaches the market is doomed to fail for his "students". Lately he gave a trade alert on his youtube channel about the GBPNZD that would go higher and he also mentioned his students were already in profit for a couple of days. I followed the GBPNZD to see what happened with it by opening a trade myself on a demo account. Well... the market went down dramatically for at least one week, before touching and almost breaking a relevant supportlevel. So if you traded blindly what he advised, you would have ruined your equity by not having any risk reward management. Even worse; he posted a short vid on Instagram to show that the GBPNZD went up three weeks later. He didn't mention anything about the former trade alert and that the market went down for a long period previously before going in the right direction, and then said: I didn't trade it myself, but you could have.

I think he would better change his career to a comedian then a bad teacher like he is now. Don't wast your time and money on this guy. He seems to pull substantial profits out of the market on his live account, but what he teaches his students is just poop.
1 trader has found this review helpful

Service use: Demo Length of use: 0-3 Months
I totally agree with the first reviewer, after downloading the Combo millionaire strategy, it is nothing more than just buy and sell at support and resistance lines with moving averages as your crossover confirmations, totally BS and you can get this for free from babypips - his money management strategy says dont use a stop loss (if you've ever traded without a stop loss you know how stupid this is)
and his never loose strategy is simply hedging on a trade i mean come on what seasoned or pro trader would ever advice this? - madness to charge $525
1 trader has found this review helpful

Service use: Live Length of use: 0-3 Months
This guy constantly babbles and wastes time during his training sessions. He has a lot of 2+ hr videos on his site and I can attest that the 1st 45 minutes to an hour of each are filled with nothing related to the training topic. Once finally on topic he will often stray off to other unrelated things like playing around with his kids, eating, answer texts or he will just sit there silent for long stretches as if he was trying to figure out what to say next. He will also come across as condescending quite often. He doesn't allow any of the participates to ask questions during the so called training and will only answer cherry picked questions afterward. His Youtube channel has comments disabled so that no one can complain.

Don't waste your time or money!
1 trader has found this review helpful
Chris
Carolina, USA,
Sep 2, 2019,
Guest
Service use: Live Length of use: 0-3 Months
Yusef is EXTREMELY EXTREMELY long winded. He talks wayyyyyyyy too much and all of his trainings. I wasted my money on the trainings because I could not get over how much he went on and on about nothing and he would get off topic all the time or he would spend way to much time talking about one thing. I did not learn anything from his training. I would suggest you find someone else to learn from.

He also has too much content on this training website. each video is way too long when it doesn't have to be.
2 traders have found this review helpful
Sort by:
Posting Date Rating
Show:
5 10 15 50