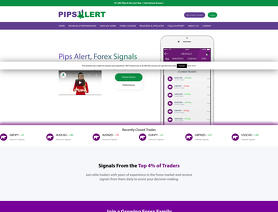 Join live discussion of PipsAlert.com on our forum

I have been through many courses online and signal providers and most of them seem to be hog wash. However when I discovered this website I was very impressed. The course they provide is over 2 hours and is completely free and they even give you reasons not to invest in their company which moves me on to my next point.

They are completely honest. They admit that they are only human and they are wrong sometimes and you are not going to win every trade.

I really enjoyed that they have a good detailed course on trading for free, as a newer trader that helped me. When it comes to signals, still getting a hang of my trading, but they do help me find setups here and their. So personally I use the signals to confirm movements on my analysis, and then trade. I give 4/5 because its really best company found thats honest, I wouls given 5/5 if they did better job communicating some of things like whem they send a lot of updates on each trade. For now I keep using them no problem.

My honest review of pips alerts.

I do not recommend this signal service for many reasons.
I have been with them now for 2 months.
I started with investor x , which performed good in the beginning.
Then I upgraded to Midas bundle. Which include all their signals.
Then I started to see the problems.
Which I will list as detailed as I can.

1) first problem , is how they manage the profit and loss , they do it in a way that has a big risk of ruin ,
If you traded with them for a while , you will notice , as soon as the trade enters profit , they will send a mail recommending to close half the trade , and set the stop loss to brake even.
Now , that alone is a good strategy , if the same is mirrored when it comes to loss.

But , when it comes to loss , they don’t recommend to you to start closing part of the trade.

As a matter of fact , they do a big mistake when it comes to losses , they repeatedly send mails recommending to shift the stop loss a bit further , then a bit further.

I am not very experienced , but to my knowledge , that is a big mistake , shifting the losses further and further , expecting the market to go as you plan.

There was this one trade , when they asked to shift the stop loss three times , and at the third time , it still was stopped out.

So , they close partial trades when it comes to profit , but let the losses run full trade , even extending them , this system is a guaranteed loss overall.

3) during news releases , They always perform poorly. And they take more trades , they don’t avoid it.

4) the pip count on their website is not correct , it’s true that they sometimes fix when someone complains , or blame it on system , but that should not be the case , they should show an honest count , specially when they advertise honesty so much.

If they really wanted to use the system as tools , they wouldn’t send step by step instructions to each trade , and they would not for example advertise hard when they have a big win.
This plays on the emotions of traders , if you wanted your signals to be used just as tools.
It needs to be done differently , just announce the signal , and let each trader manage it his own way according to his or her system.

6) subscribing to anything beyond investor x and venture x , maybe jaguar for gold is a waste of money.
Because the rest , just send you the same assets all over again with different entries , or they hedge against each other.

On many many occasions , you can get 4 different signals , all to buy gold for example , all at different entries , why would you quadruple the risk on one asset , and if you won’t , then why pay extra money for this ?

Bottom line , I do not think pips alert is a bad company , and I was actually excited about their service. But my advice , if you use this company , be sure to use your own management system , do not listen to closing part of the trade in profit but letting your losses run , and do not trade with them during strong news events , and just limit it to one , investor x or venture x. And that should be not so bad.

It has the potential of being a good signal source , but it needs a lot of managemt from the trader.

Thank you for reading my review.

Good luck and success to all.

rodrism,
United Kingdom,
Apr 17, 2019,
Registered user
Hi, I would like to share my personal experience with Pipsalert. I started trading with demo accounts, tried several apps for signals but in general quite bad, I have been using this platform for over 2 months, after that good signals I started trading harder with real money. I have been tracking my progress closely since end of February, in March I got a profit of 30% over my investment, April by now not so good with a 2% loss by now, however the average is positive with around 1% per day over the money invested.

Regarding the use of signals, with my full time job I do not have time to look at the market all the time but when I get the signal, depending on how confident I'm with it I decide how hard I bet or not.

I feel quite happy with Pipsalert.

Hermi,
Sydney, Australia,
Apr 11, 2019,
Registered user
I Have Been with pips alert for 4 months and so far my experience is:
* good entries on lots of pairs
* some honesty with These guys As They Respond and amend errors, They Usually blame the data entry team who the make errors Often
There are some trades that should be closed that are shown as open, I have also noticed that some of my trades that retrace after moving Stop loss to BE - some times my trades close and theirs still makes 70+ pips, maybe that is slippage but I have I have been trailing their entry price so I can not explain that. I am not sure
if they will be able to tell me what they are saying. doing you can be profitable
* they offer cheap trial period
* They respond to your inquiries so I give them 3 stars for the good entries but I deduct some points for the errors and the trades that show as profitable when they have closed in Break even

Reply by pipsalert submitted Apr 13, 2019:
Thank you very much for your honest review.
The company is working on improving the review team.

To address the open trades, those trades are closed out after 2-3 days and during weekends we make sure to have everything is updated. The data entry team instead focuses on the running trades. But, we will always keep things updated at end of 7-day period.

When it comes to the trades, our MAX ROI course explains how performance is registered. We send signals out as tools, and we report it for scalpers, hybrid traders and long-term traders.

In turn, we signal various points in the market for closes, it's the responsibility of the trader to manage the trades as see fit. Previous we tried sending 3 different signals per signal, but it got too messy, so we use a hybrid method to fit all types of traders. Then it's up to the trader to manage as seen fit.

Thank you very much for your feedback and we hope to improve.
As you already mentioned, when an error is made, we're quick to admit to it and fix it. Honesty is something we strongly value and thanks for being part of the community.

I have been with PipsAlert for 3 months and their customer service is excellent. I have put pips in the bank every week with one exception which was a week ago when there was a drawdown of over 500 pips for me. They are very open about their service and quick to offer help if need be. I would recommend them even if you are just looking for entry and exit points or for scalping.

Reply by pipsalert submitted Apr 13, 2019:
We're very happy to hear that! Our team shall continue to provide the best services in the market and you're feedback has made our day and it's the evidence we need to continue providing great services to all traders.

I am actually profitable in my trading now thanks to these guys.

I am actually profitable in my trading now thanks to these guys. It's funny what a little bit of structure can do for your trading plan. I now have the confidence to enter trades knowing that I have a high probability of my analysis being correct. These guys are truly professionals and experts in the field. Would highly recommend to anyone that needs a little help in the right direction or anyone looking for that extra edge in their trading. A+

Reply by pipsalert submitted Apr 13, 2019:
That's correct, we're here to provide analysis in the market and also free educational material to guide traders in the market. Combine that with your own skills and unique style to create a powerful combination. Thank you very much for the feedback

Pipsalert is, so far, the best provider of signals I have tested. I have more wins after I started to recieve signals from their service. I am actually making money with them.

Reply by pipsalert submitted Apr 13, 2019:
Tom we're very happy to hear that and it's encouraging to hear such strong feedback from the community!

Really an excellent signals provider. Very profitable, but also very humble, enthousiastic and professional. The IOS app will be released shorty I hope, this would make it even more practical for me. Keep up the good work guys!!

Reply by pipsalert submitted Apr 13, 2019:
Yes, the iOS App is on the way and we're hoping to have it out in the next month / in the summer. It's incredible to have such feedback from the community, it humbles us even more to provide such services :)

great company, very good support for analisys. great assistance and updates on every signal. company is growing and make the service better and complete.
Sort by:
Show: