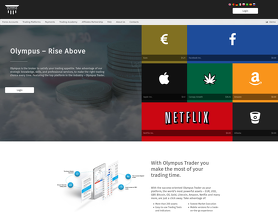 Join live discussion of OlympusMarkets.com on our forum

Big thieves who are stealing your money and are not traders at all.

They want more and more money added. If I refuse and indicate that I do not have time to do this on a daily basis, they indicate that through an extra deposit they will earn money for me. Nothing comes of this. If I ask to refund the money because there are no activities, I get the message that the deposited amount of € 750 has been fully incurred. This despite all kinds of commitments. They are big thieves and only want to have more money deposited in their account. Never join the sea !!

DEEPLY HUMP THIS GUY MARK PAJOT. HE SCAMMED ME AND LURED TO TRADE WITH OLYMPUS. AVOID TO BECOME A VICTIM OF THIS RUBBISH OLYMPUS MARKET.

Olympus markets are big scammers they push u to deposit more money otherwise you will not get the amount you already invested, then they make you think your investment is growing they give you specific date to withdraw as soon as you request withdrawal all your money vanished on the account and its close Zak Goldberg the fake account manager calls and start insulting you because I you don't want to listen to his lies anymore Please beware they are heart less scumbags

Olympus Markets taking me for a ride

Beginning of April I registered for free on the Olympus Markets website. Everything looked very promising. I was a raw, green, no experience trader. Very naive too, I realise now in hindsight.
I experienced what I now see all the others experienced. The website promised you can trade with $350 dollars which I deposited.
Their admin seemed thorough, but now I know, only when one pays them money. When they have to pay you money, there's no admin at all! Auto responses and that's that.
Anyway, after depositing a week went by before a Nick Brown contacted me (I suspect the identities are fake and electronically generated; the names of all the names appearing on a whatsapp message or online chats, are English, sounding very artificial after you talked to a few.) Anyway, Nick prompted me to invest a bit more money, then he can trade better for me, promising me the moon, sun and the stars. They are very convincing. But this soon turns into intimidation. He said they'll give me a bonus if I deposit more. He connected to my computer via EasyDesk and showed me a few basics. I deposited another $1,068 on the 9th of April 2019. Things looked good. He did a trade, which I now doubted was a trade, money was added as bonuses to my account. The account did so well, he said if I deposited another $2,000, he could really turn the taps open and build a significant financial profile for me to generate passive income in future. Guess what? I deposited the $2,000 on the 15th of April 2019. All three these payments from my Mastercard. Then he had me do a bitcoin trade from my end, and he didn't watch it and allowed very high rollover penalties to eat all the profits and the trade went south. He said it was his fault, he'll make up for it, never contacted me again and completely disappear from the scene. 4 weeks after Michael Green contacted me. He said he was higher up in the ranks and in charge of the South African accounts. They dealt with Nick Brown. He himself will take over now. BUT, guess what, I have to deposit more money: But not from my bank account, he suggested. I should transfer the money from my Luno account, it is faster, more efficient and then he would have a connection back to my Luno account to start pay me back some profits. (Lie!) But I'm new to trading, new to Luno! We were connected via EasyDesk and he was showing me how to use Luno (I feel like an idiot thinking about this now). Next thing he set up my Luno to send bitcoin. Next morning he was on me per whatsapp call , getting connected again. He's fast and before I knew it money was flying out of my Luno account, cause he said: we might as well just transfer the money now... $317 worth of bitcoin flying to an e-wallet. I asked when we will start trading and if I can try a trade, because I was practicing on their demo account and felt confident. He said yes. I did a trade making $70 on crude oil, and next thing I see money owned to Olympus added to my account. I was very upset. He said had to add that credit on loan to me, because I needed it while doing the trade. That was simply ridiculous! He said I now need to pay this money urgently before he can do any further trading, and then he will also have $5,000, which is actually the minimum he needs to do proper trading. Then they can add liquid money and build a profile that will ensure a steady monthly income for me. By now I was really uncomfortable, but he kept on hanging the carrot in front of my nose. He knows I don't earn that much money and times were uncertain, so he knew I was tempted and keen to generate a 2nd stream of passive income. promising me steady payouts from September 2019 onward. He said I owe them the money now, so I better pay up! I said, I'll pay this money, but I'll need payouts soon, because by then we were expecting my husband to loose his job and we would need the cash flow to re-establish ourselves. Money sent via Luno to the same e-wallet, $1,525. I said that's that. NO MORE MONEY. I paid "my debt". Close all trades, close account, return my money, my husband expects to loose his job. He said he will do a quick trade in bitcoin, cause it going up, then he'll return the money. Guess what then: I didn't hear from him. Days later he answered my whatsapp saying he's ill; he has to look after his health now. I said, well, is there no-one else who can close the trade and close the accounts. I tried three times to make withdrawal, just get auto responses: the matter will be referred to the appropriate department. I sent 3 emails to the support desk, auto responses and "The matter will be referred to the appropriate department". In one email I quioted their own regulations for them. I tried online chat - same thing. Every time they answer you after a chat, the chat disappears from the screen. If you try again, another identity answers you. Last week I got a whatsapp saying he will be back beginning this week, Monday. Well, it is Friday, sent him a whatsapp yesterday - no response. Dead silence. No responses from no one. I am fed up and really need my money back. These guys are either very unprofessional or utterly cunning. Please do stay away from Olympus Markets.

Sajjad Khan Sun,
Dubai, United Arab Emirates,
Jun 7, 2019,
Registered user
Over the phone conversation didn’t felt appropriate by their customer care. They told me exactly which was written by the other reviewers for this company. And yes they told me that they are from Bulgaria but they are calling me from UK!!

Abigeo,
South Africa,
May 20, 2019,
Registered user
After responding to an ad online for bitcoin revolution, I was immediately contacted by Olympus Markets and told to deposit $250 which at first I was hesitant about, but after comforting assurance that I would receive an " account manager" who would manage and trade for me, I was put at ease and obliged. I was even more at ease when " Elmer Klein" the "account manager" contacted me the very next day. He was very reassuring and promised that my capital was safe as he would be trading for me, I was dumb to fall for it. On the 07/03/ 2019 he advised me to invest another $2000, which was risk free, I did and obviously I made profit, on the 12/03/2019 he told me to invest a further $4500, I was hesitant but he told me to trust him and to make a withdrawal of $250 as reassurance, it worked!, I received my withdrawal and made the deposit, but once again I made good profits, so all still seemed in order. Here's where my nightmare starts. He then tells me to make another investment, at this point I refuse and tell him I don't have anymore funds, this is when he starts getting annoyed I guess, and gets rude and agressive!. I then ask to withdraw all my funds which is now at $11 000, he refuses and says he has a solution to still make profit on that. However he continues to press me into making another investment, I still refuse and it all goes downhill from there. My account went from $15 000 to zero, he kept making huge trades, with big lot sizes, even I know this is not wise and told him to stop. My account eventually ran a loss through margin calls, and all I got was a sorry and "you win some, you lose some" this is NOT good enough for me!!!. That is not even where it ended, after the loss I expressed my dissatisfaction and was told he had a "solution". The "solution" ended was me being smeared off onto another "South African" colleague, who apparently only deals with South Africans, but you can guess, "Marc Evans" the colleague wanted me to invest more money in order to regain my initial investment!. Olympus Markets the company claims to be based in Bulgaria, but these men were calling from the UK, also they claim to be owned and operated by Next Trade Ltd, but the beneficiary is PRIMEcfds, who after research I have found seems to have been the name of Olympus Markets before, and are now disolved, who also were a scam company???, it raises many eyebrows!, also, I have found many people who were scammed by Olympus Markets in a similiar way. Can anyone please help, all I want is my capital investment back.
Thanks in advance