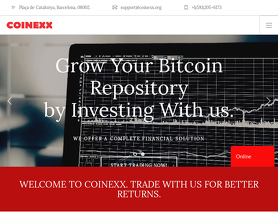 WARNING: Coinexx.org appears to be a HYIP.  So far, all HYIPS the FPA is aware of turned out to be Ponzi Schemes.  The FPA strongly recommends AGAINST placing money with any HYIP.

Please read this article for more information on HYIPS and similar companies...

Join live discussion of Coinexx.org on our forum

Then they tempt you with bigger interest %, or more frequent withdraw frequency (i.e. 2 months down to 1 month)

Then the excuses come.
- The law in the UK changed and you have to pay a withdraw fee.
- You deposited the withdraw fee into the wrong account, and the accounts guy is away, can you pay again.
- you get the idea

Then they never pay nuthin, of course.
Then delete your account and block you on their whatsApp / Messenger.

Here is a screenshot of the last IM message I got from coinexx.org
https://ibb.co/XjXpbWc
Says it all really.

I have been scammed by Coinexx.org!

It started well over a year ago, I got involved with a Bitcoin 'investment' that was paying what seemed to be excellent returns. I put a small amount in to start with, just to see if it was legit. Sure enough, they paid what they said they would.

I was pretty impressed! So I put a little more in.
Once again, they paid what they promised.

Early this year, I put a LOT in and for a few months, they still paid me what I was promised.

I had no reason at all to believe that this was a scam. They had been in contact with me regularly, let me know what was happening with my account etc. They seemed just like and operated just like a legitimate business.

Then about 3 weeks ago, they introduced a withdrawal fee. I thought this was unusual, because we'd never had to pay one before, but again I had no reason not to trust them. They'd done everything they said they would for over a year.

So I paid the fee and was expecting my next withdrawal. This withdrawal was going to pay rent on my home and office and several other bills I had coming in. I was told that my mothers account was linked to mine and that she would have to pay her fee too so that we could withdraw.

Unusual, but plausible. We sold some things to come up with the money and figured we'd just get them again when the withdrawal came. Now I know, as you're reading this, you can easily see how scammy this is. In hindsight and as I write it, I feel so stupid for not seeing it myself. But as I said, they had built up my trust in them for well over a year.

Then we were told we needed to pay to have our accounts unlinked so that the payment could go to our separate bitcoin wallets and the fee would be credited to our accounts once this was done. So I paid that fee.

A few days later, and I'm really sweating on the withdrawal by now, I was told that the fee was sent to the wrong wallet and we would have to wait for the company to correct it, but the employee was on leave.
So I paid it again! Being told both transactions were going to be credited.

Finally, we were ready to withdraw! Another few days came and went... We are really behind on these bills now. I sent a pretty long and detailed email to the company about how f*cked we are if this doesn't come through soon and asking that they hurry the F up. I got a message from one of the people from the company I have been talking to saying it was all a scam, we aren't getting nay money and to stop trying, just focus on looking after my family.

So, we got scammed. It was so intricate and over such a long period of time that I didn't expect it. I really thought it was a legitimate business.