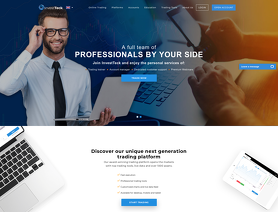 Service use: Other Length of use: Have not used
I had invested £6,000 and made £60,000 within a few days only to be told they I couldn’t withdraw my money without Julian Smith approval. Once he knew I wanted to withdraw my money he started hounding me day and night via WhatsApp for more and more money to grow my account to 100k. He started getting abusive towards me. To make my investment to Investteck they used a fake site which put you through to Jubiter.com and have created accounts in my name but I’m not able a verify my account details because I did not set this account up. Jubiter won’t help me either with getting this money back and Andrei Pascu has been very aggressive towards me on the phone and really unprofessional in his manor in which he spoke to me. I would like to get Investteck stopped and banned from stealing people’s money. Also I wouldn’t recommend Jubiter at all they are a scam company also they don’t care as long as they have got their money.
1 trader has found this review helpful
J
Jakins
Singapore, Singapore,
Nov 11, 2019,
Registered user

Service use: Other Length of use: 3-6 Months
Investteck, Olsson Capital and Jonesmutual are all opened by the same Estonian registered company GreenRiver OU, so we are all being scammed with similar tactics and stories. See my invitation to Trader's Court for Jonesmutual to attend
More. Community discussion of this issue >>
H
Halldor Jonsson
Kopavogur, Iceland,
Aug 13, 2019,
Registered user

Service use: Live Length of use: 0-3 Months
Stay away from these bandits. My contact called himself Mike Nielsen.
I fell for them because of their nice website .
A
Andie
Australia, Australia,
Aug 7, 2019,
Guest

Service use: Live Length of use: 0-3 Months
1 star is too many stars for Investteck.
Right from the start they put so much pressure on me to trust them, so much talk about how they will change my life. Joseph Smith is the most smooth-talking salesman until you challenge him & then he becomes a true bully. luckily for me Joseph Smith has put it in writing via an email to me for me to share here. he really sucked me in & took advantage of my vulnerability
I have asked for my profit to be sent to me & this is his response
His words were:
"You didn’t comply with the agreement; your account is on hold until you fulfil your side of the agreement.
Once you deposit the 60K AUD, you will have full access to the profits, as we agreed. That is how business is done. You stick with agreements."
The agreement he is talking about is a verbal one after he convinced me to get a loan out for $60KAUD
So you see he tricked me, he told me to get a loan of $60KAUD & that he would turn it into a good investment for me one that would set me up for a life time he said. Joseph Smith said he'd do me a favour & start me off my putting $20KUSD into my account so I can see him perform and start to earn profit. PLUS he did this as he said he was in the running for some new flash sports car worth over $400KAUD
in relation to his $20KUSD offer I asked if I have to pay that back? NO he said & I asked what does it cost me? nothing he said & I asked what about the profit? it’s all yours he said, it’s your account. so of course, we were waiting for me to get a loan & in the meantime a few people including my accountant had said to me see if I can get the profit I have on the account now out before I put in my 60KAUD.
And so this attempt has led me to here. I have been told i am a joke, that how could i think my original $1200AUD would allow me to get the $7200USD profit that is in my account & has been built up by the so called bonus of the $20KUSD he put in. it was all done to scam me to trick me into believing it was mine.
I said there was profit from my $1200AUD in there before he put in his $20KUSD but he said only $800USD plus 4% of the Actual 7200USD profit that is actually in there & I said well then i take that & he won’t release it
Also conveniently the website has been down since Sunday which he has been saying is due to maintenance & will be up in an hour BUT it isn't & he is now saying it’s because my account is on hold. Not sure how my account can drop out a whole website? I've been asking for two days now to speak to Josephs manager & I have even emailed compliance as well & nothing no response except bullying remarks from Joseph Smith
BE WARNED - ABSOLUTE LIARS, BULLIES & SCAMMERS so horrible to have experienced
Sort by:
Posting Date Rating
Show:
5 10 15 50