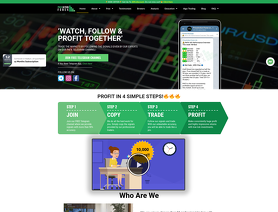 Join live discussion of PriceActionLtd.com on our forum

I have tried so many signals , but this is the worse so far

They lose a lot more than they profit and they have separate telegram groups with separate subscriptions ( PAICC ) for indices and commodities for 75$ a month and ( Forex VIP ) for forex for 40$ a month , but it's just a scam because they post PAICC signals in the forex group so people are paying subscription for nothing

And they lost a lot , here is a quot from there group :

Looks like we are going through a minor losing streak. Requesting everyone to stick with proper money management. Do not try to recover all losses with one trade. Stay patient, we will share potential setups whenever they are found.

Of course they never recovered after just kept on losing and losing....
1 trader has found this review helpful

I paid three-month membership for algo trading. Not only that I lost that money, they also almost blow up my account. I stopped that after 45 days to save what's left on the account.
1 trader has found this review helpful

I would not recommend the Algo robot. I gave it a full month to see what it could do even though it was giving losses straight out the gate! I understand forex and I've been trading for almost 4 years. So I know you will have losing days and losing weeks. But if you have a solid trading plan then you should see consistent gains. They advertise 5%-40% gains each month. I'm not sure if the testimonials and pictures of (other customers gains) were demo accounts or what. But i started out with $713 and ended with $706.37 after 30 days. I know that's only $7 Ioss but with claims of 5%-40% or better this was a Complete waste of time and money. And on top of that there are no refunds.....I see why! I would never recommend this service to anyone ever!
1 trader has found this review helpful

The Algo Trading is a trash. I tried it after reading so much bad reviews

I will totally discourage anyone from trying out the Algo trading! It's a total scam. Lost 100% of my fund within 24hours! Of course I read bad reviews about them and was hoping they would have update their system and for the fact that I monitor their analysis on the signal channel, I felt they know what they're doing. Unfortunately, when the signal group says buy, the Algo trading goes in the opposite direction, it close your positive trade at $1 profit but allow your loss to run to as much $-250!!!! Per trade. That is unprofessional, despite my complaint(I have screenshot) they kept on claiming to hold on when I checked for sure the trade is not coming back.
1 trader has found this review helpful

Reply by PriceAction Forex submitted Sep 2, 2020:
Dear Sir,
We are extremely sorry to know that you are not satisfied with our Algo service.
You have mentioned that you lost 100% of your fund within 24 hours.It may happen only if

Which are strictly prohibited and mentioned clearly while you subscribe our Algo service. Otherwise it is impossible to lost 100% of your fund.

Because our Algo has never blown any account. We use small SL. No chance of blowing account unless you take action from you end.

Our Algo and Signal are totally different services. Algo works based on preset parameters and focus on chart of shorter time frame, While signal focus on longer time frame.
Based on chart movement trades are taken.


Made $6000 monthly from it..... Just from their free signals offered
1 trader has found this review helpful

If I send BTC to increase it, I will not return it, it is the worst.
Please note that this type of fraud seems to be rampant

Is there a way to get it back?
I'm Japanese so I can't speak English
1 trader has found this review helpful

Reply by PriceAction Forex submitted Sep 3, 2020:
Dear Sir,
We are working hard to improve our service. We have a customer base and we are always with our customers.
According to our policy https://priceactionltd.com/terms-and-conditions/
if you are eligible to refund we are always ready to refund, no matter which payment method you use.

Kindly contact our support @pafx_sub on telegram so that we can help you to solve this issue.

They know how to market themselves really good and you will feel that they are some professional trading experts but they are a bunch of amateurs who dont know a poop. They are not transparent and their algo trading was terrible. I tried their algo for 2 weeks and more 50% of my account is gone, like that. Please stay out because they are convincing and they are good with their marketing skills. I wish i could sue this company for scamming people like this.
2 traders have found this review helpful

Reply by PriceAction Forex submitted Sep 14, 2020:
Sir
It hurts a lot when our customers are not satisfied with our service. We have a team of 15 professional traders with more than 10 years of market experience.
We share our analysis in free channel with proper reasoning. An amateurs trader can never do such type of extensive analysis. Also we show the proof of how market moves according
our analysis.

Forex is not a quick money option. You need patience to win in Forex market. In last 10 months we had only one negative month which is very normal is Forex trading.
2 Weeks is not enough time to judge quality of a trader. Those who are following us for long period of time, they all profited. Sometimes new traders start taking trade with
big lot size without following our guidelines. This happens a lot. You may have made the same mistake.

We are not here to scamming people. We have the best traders and customer support team in the market. We win when our customers win.

Hi guys,
I have been here to see the review of Price Action LTD and there was mixed reactions and decided to test them my self on $1000 ECN Account and i lost $65 first few days ,they use very dangerous Martingale which will blow up your account sooner or later,do not waste your many with them,i warned you!
1 trader has found this review helpful

Subscribed the price action signal service because they have lot of subscribers in their free channel and they have put a lot of ads which polished their brand to lure new subscribers in. I have joined their one month package, but few days after i joined them, i have realized their signal actually copied from other group, because I have joined both group and their signal always delay and published later than another group. Of course, they have signal copied from other group as well. Besides, their signal not as accurate as what they have promised. After you joined their group, you will realize lot of trades hit SL level. Besides, they will keep on spam the message from their Indices VIP group such as"US30 TP hit +150pips", to upsell you their another VIP group. They won't give update on every trade published, will just ignore most of the losing trades. Because lot of message especially forwarded message from their another VIP group spam inside the chat, that make us as a member difficult to track back every trade that they have made. It is very easy for them to just delete any losing trade post, which will let them easier to manipulate the weekly result. They also guaranteed real pips calculation, means if one trade close half at 50 pips level, 25 pips will count as their result, but at the end they also ignore it. Overall, I think any of new members shouldn't waste their money on this service provider. I have subscribed a lot of signal group while 100% of them are not working.

Although their result look very good, weekly gain few thousand pips guaranteed, win rate is so high, but it won't work due to the following reason:
1)The risk to reward ratio is not promising. Most of the time, they give a trade with SL 100pips while TP at 200 pips, it seem to have a good risk to reward ratio, but the probability for the trade to reach TP is very low because they din have good analysis on that. Therefore to secure the pips, they will suggest to close half trade earlier most of the time, maybe 30 , 50 or 70 pips. While you still maintain half position on this trade, when the TP reach, they will claim that their analysis was so good that these trade have earned total all the 200 pips. In the long run, you will lose money.

2) They will manipulate the result. I have joined a channel where it gave a lot of signal at one time, perhaps 10 -15. When I checked back the chat history at the next day, I found that they have deleted all the losing trade message. You all shouldn't believe their beautified result. Remember! Everyone can just type any things that they want. Ask for the investor password, then you can see how their track record.
2 traders have found this review helpful

If u wish to blow your account, join them

Algo trading is not working, it can not adjusted according to market condition. Their result is over promise. Those advertisement u seen was repeated, maybe u profit by first week, if u lucky.
1 trader has found this review helpful
Sort by:
Show:

Read the unbiased users reviews on ForexPeaceArmy, they could give you a good insight on if PriceActionLtd's signals and services are good or suitable for you. https://www.forexpeacearmy.com/forex-reviews/16746/priceactionltd-forex-signals

Please come back often as company services are very dynamic and can improve or deteriorate rapidly.

How much does signals from PriceActionLtd cost?


How can I pay for PriceActionLtd's signals?

You can pay for PriceActionLtd's signal service via below payment methods.