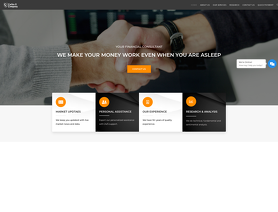 Join live discussion of CarlosAndCompany.com on our forum

Carlos and Company Is financial consultant who believes Discipline way of trading and consistent results with the team of experienced professional of this market. But always remember the returns are subjected to market risk.
Trading foreign exchange on margin carries a high level of risk, and may not be suitable for all investors. Past performance is not indicative of future results. The high degree of leverage can work against you as well as for you. Before deciding to invest in foreign exchange you should carefully consider your investment objectives, level of experience, and risk appetite. The possibility exists that you could sustain a loss of some or all of your initial investment and therefore you should not invest money that you cannot afford to lose. You should be aware of all the risks associated with foreign exchange trading.

They started messaging me on Whatsapp, showed me lots of telegram screenshots and some excel spreadsheets. When I asked for some actual proof, like verified myfxbookm account or something, they showed me an account named anthonywins and claimed that this is their client, who has grown his account by using their signals. I sent a PM to the owner of the account and turns out, he has no knowledge of any carlosandcompany and does trades based on his own analysis. After I showed carlosandcompany screenshot of our conversation, they tried to convince me that their clients are shy and don't want to talk about it so that's why he denied it. Needless to say, I blocked those scammers immediately.

amy walsh is working for this company. i believe she also worked for UFX bank, another scam, along with mike lane.
https://www.financemagnates.com/forex/brokers/cease-trade-order-issued-against-ufx-bank-mike-lane-and-amy-walsh-cease-trade-order-issued-against-ufx-bank-mike-lane-and-amy-walsh/
amy walsh has several social media accounts:
https://medium.com/@amywalsh00786
https://www.quora.com/profile/Amy-Walsh-172
https://twitter.com/AmyWalshfx
https://www.reddit.com/user/walshamy/

I put 2 stars instead of 1 because I don't believe they are scam, they are just really bad (I am not sure if this is less worse). I read all the reviews here and talked to Jason about it before paying, he insisted that they were from oppositors or people that misused the signals, I unfortunately accepted this and paid $500 for 4 months of service (basic plan).This is supposed to give 2 or 3 signals daily, Jason promised me a "decent profit", as he said, around $700-800 on first month using 0.1 lot size (I had around $300-400 on balance at that time, and it was my first month trading). On the first week, Jason didn't say to me to add his number so I got nothing for a few days. Beside this, the few ones that got were really bad (at most 1 or 2 reach tp1, when you are required to close half position and put SL to breakeven), so the expected profit was nowhere to be seen. And also, we were 8 and a half hours apart (they are from India) so many signals arrived at 2 or 3 am (I wake up early at 6 am but that was not enough to get the signals in time). Jason began to treat me really bad because of my complaints, and passed many days without sending me nothing (I was somewhat relieved to not get bad signals anymore). He sent me to talk to his superior, Mr Steve, which seems to be nice, he called me, but just curled me and sent back again to Jason service.After another week, the situation got unbearable, the girl in the chat stopped answering me, I asked for refund but got no reply. Finally, Mr Steve took Jason out and put another in place (the researcher of the company, Joe the pip eagle). He seemed nicer and calmer, treated me better than Jason, but his eagle probably is myopic, the signals of the first day all ended on SL (he sent 4 or 5). Today was better, he sent 4 or 5 again but some I couldn't enter because he sent again at 2 -3 am.My balance is down to $12 so I am really choosing what to enter or not, and I am still testing the accurary (which I don't expect to improve). I basically don't have any expectations anymore, I know is going to be hard to get refund, I am just truly hoping for a miracle of lots of good signals and balance recover, but this is not likely at the moment. They have an intense marketing, specially on Twitter, and other indian companies do the same and offer similar plans and prices, but I don't know their quality, they are probably better than CnC (hard to be worse).I curiously met a woman on Quora (won't say her name, she is very nice) that worked for them to clean up their image, specially here. I guess they are troubled about their bad reputation on review sites, and want to reserve this image (I guess it would be better to get the service better instead). Unluckly, I found many free signals services after this (or much cheaper ones) that deliver much more signals per day and pips per month ( there are thousands on telegram), but it is definitely not wise to use those signals without testing first. I hope things get better and my second month improves, or my life as trader won't be long. Thanks for the space here.

Before I subscribed to this company, I tried to read feedbacks first, but unfortunately, I didn't find many, so I'm trying to leave something for the next person who wants to join them.
1- I received 96 signals in a month which is a reasonable number. 46 signals (47%) hit their target (TP1). 30 signals (31.2%) hit the stop loss. 16 signals (16.6%) closed early with a small profit or losses. Two signals were closed on breakeven. These numbers are not encouraging at all
2- 37 signals had TP2 (take profit 2). They ask you to revise the SL to the TP1 and leave it open awaiting hitting TP2. Well, only 5 signals hit TP2. It means that the rest of them hit SL, so I lost the money I've earned before TP1. I'm not sure why they place TP2 with these results.
3- When you subscribe to this service, they start sending you a daily newspaper on WhatsApp. The content of the newspaper is actually very good, and this was the best part of their service. There are some signals in the newspaper that I entered, but most of them hit SL. They told me later that I was not supposed to enter those signals. I'm not sure why those signals are included if they didn't want me to activate them and then why they didn't tell me not to do it.
4- In general, I lost $200 for a one-month subscription and also lost about $100 with their signalling. I found it very entertaining that they were trying to encourage me to extend my subscription after a month.
1 trader has found this review helpful

Terrrible and could be a SCAM carlos and company

I took their basic plan where they kept giving signals then they pushed me to upgrade for higher then premium service to manage my account, where they managed to make me loss my entire balance by not putting SL and keeping trade fall , I kept messaging them bout the situation and they kept saying no they know what they doing. and no even they don't even replay to my messages to understand what happened , the account manager keeps making excuses of being busy and they sales guy keeps avoiding and no replay to my emails, my rating is for their worse customer service they don't even have guts to stand up on what they did to my account ? lets hope they replay to this post
1 trader has found this review helpful

There has been times when I had been not that satisfied with the service, as I am sure most of the traders must feel sometimes, but overall I liked the fact that they are true to what they promise and have always delivered same if not more results, exactly what they promised us.
I had taken their one month trial package at first and then discontinued the service after the first month.
Did try 3-4 similar service but was disappointed and hence at the end came back to Carlos only. Although i have read their negative reviews but I try the service rather believing on other reviews. Now I am quite satisfied with them.
I am currently on 5th month of my half yearly package, will be continuing with them after completion of this as well.

I have an experience of 3 months with the the company named carlos and company.
To be precise, I am about to finish 3 months with them. The signals are good but its you who should follow the risk management it's your money. I have tries 4 companies so far but this is the first time I am thinking about renewal after my service tenure ends.
I wanted to get it cheaper though. But the service is worthwhile.
Long live carlos
1 trader has found this review helpful

Not a profession signal company

Not equal what u paid..pls do not trust this company

I have been using their services for last 6 weeks from 15 March 2020 and in my last 6 weeks of trading with them has been good. I was very skeptical before subscribing to their services and upon taking their services, I must say that they have been good and their signals has been strong enough. Nothing is 100% in trading what matters is winning ratio, and it's been quite satisfactory so far almost 75% winning trades so far. Sometimes there were losses however the other signals are successful to recover the losses. Hopefully, I shall again try to give my feedback in a months time from now on.

Reply by carlossmith2102 submitted Apr 30, 2020:
Thanks for sharing your experience. We look forward to hear more from you regarding your upcoming trading tenure. Always try to serve you with our best services.

They are best in their craft.

I have been associated with the company for about 7.5 months now and have already taken another yearly package, as far as signals are concerned I think they are as promised and I have got personal assistance from their end which was very much needed as I was a newbie. Now I am at a better position learning wise and in terms of profits, I am really grateful to their entire team!