What is Market Makers Method?

Market Makers Method is a software development company that has created a trading tool called Dashboard©.

Please read Market Makers Method Reviews below and share your experiences in using this trading tool. 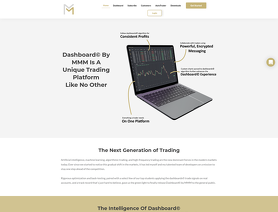 Join live discussion of MarketMakersMethod.com on our forum

I bought his copy trades for 3 months, after the first month with 80% of losses, I cancelled it and requested a refund, but there has been no response from them.

Stay away from them if you don't want to get scammed.

This dashboard is too much money for what it does not do.

.I first learned about this through JustinEqualsTime from YouTube. In general he is a good trader and has helped many people when he is not trying to sell them an indicator. After my experience with the company he recommended, that opinion has now changed.

Nevertheless, the video was by Justin is entitled "How I Made $12,000 In 1 Month Trading The Market Makers Method."

He said the company reached out to him. He says this dashboard is "perfect for beginners". And so, he did a full blown commercial for them. Before he goes into the details, he baits you with his winnings. He hardly explains what the dashboard does. He gives the product about a moment of time (not really showing how it works out) but the bulk of the video is entertainment.

And, of course he says he was a bit skeptical when they first contacted him about their product. (what humility) Making the world think he is an advocate for us as he tells us how many others are selling their reputations when approached. But, he then takes you with him on the boat ride, the meals and a gun range as he is wined and dined to be their spokesperson. After all, MMM knows JustineEqualsTime has over 77.4k in subscribers and that equals more than time, it equals money!

Why mention this? Because the bulk of money was made trading silver and not Forex pairs. Were we deceived by this slight of hand action? Most of us trade Forex pairs. This is important to me because many indicators cannot keep up with the Forex pairs like they do Stocks and Futures. This was why I was attracted to the dashboard. But experience has shown many indicators fail to help trade Forex because of the manipulation.

My biggest problem with this dashboard is the changes/signals are only provided 1x per day. And often times, by that time, the trade has already taken off from the area. If the trade does not return and retrace, you have to find a place to enter, but that is a gamble. I am not sure why they dont provide signals every four hours??

For me, three trades had a signal, but changed within a few days. Many have noticed this and pointed this out. As I will mention below, the USDCHF was not only a signal, but it was provided by MMM.

Premise of the app? It provides what they call a PFH and a PFL. A "peak formation high / peak formation low." Which is basically a trend change If I understand correctly. I could follow the new trend if certain criterial was met.

I took my first trade which they provided in their Trading Floor/Jasons broadcast channel. Not only did they identify the criteria had been met, they added their own notes about the trade. (snip on file). But the trade had gone from a 2PFL to a 2 PFH within days, even though the note on the photo says "only longs". Not according to the signal in the dashboard. Why stay in a trade that has a signal reversing toward you? I am sure they can justify this, but my point being that this is not "perfect for beginners" as their spokesperson said. This caused confusion. And as I said, just read the chat.

In fact, as you begin to read the chat inside the website, people were upset. Some were saying it repaints. Some said it is a scam, etc. I kept a few snips for proof.

Another problem encountered was the receipt. There was nothing received on my end to prove I signed up for the monthly subscription of $69.00. I asked via the chat and was told to check my spam. I DID. While in the website I kept asking and kept being ignored for over a week. There was hardly anyone monitoring the dashboard chat.

Newcomers are directed to watch the videos in the University link. Instructions say to find the Telegram group as well as the files you can download to obtain a TDI indicator. TDI? Why? I thought the system was a stand alone? I never heard that we needed a TDI to help with the signals. Justin didnt point this out.

The system is constantly freezing. It has to be refreshed (at least for me) The chat freezes up as well. Often times, if I leave the dashboard up, I return and a message is displayed that it timed out. I get the sense they sold us a product before it was perfected. In other words, as if they sold us a car, took our money in advance and told us the vehicle is still being built.

It was also annoying for every new subscriber to fill up the chat with "what Telegram/where's the link" People would respond "it is on the bottom of your receipt". But for people like me who didn't get a receipt, where was that? And, instead of an employee helping them out, another kind customer helped them discover the location. Throughout the chat (to this day) people are asking for the link.

The Telegram group was nothing more than people throwing out their ideas and their expertise. On the top of the banner it said certain behaviors will be met with a warning and then you can be kicked out. I admit, I did complain about the dashboard and how it seems to fail many people. But as with every group, there is a cult following who do all the dirty work for the MMM personnel. People like me were laughed at, made fun of and called names. (I dont know why criticism is not permitted) But I was not alone.

Next thing I know I was kicked out of the Telegram group and unable to reenter. No warning (like it said on the banner above). So my subscription does not entitle me to a Telegram group.

Finally, this dashboard is overpriced at 69 dollars a month for its use. Especially if it requires additional indicator(s) and is not a stand alone product. Many in the chat talked about how the dashboard was a confluence, but at 69 bucks a month, one can do much better buying one quality indicator instead of paying $828.00 a year.

I wish I had followed the others who posted reviews on FPA. Apparently the same company has been doing this a while?.
3 traders have found this review helpful

I was led to believe their signals are good but they are not at all and the website says they offer refund if not satisfied but my requests through email, instagram, text message, and telegram group are being ignored!!!!! $147 for signals to not make no money from them.
1 trader has found this review helpful

April 2019, Nick, the trader, offer a new trade copier service called "Emerald" charging $300 USD. I signed up and so did 82 people (assuming due to his telegram member channel count)

2 months in, Nick blames psychology and that he cannot trade at this time and needed a break. I understand. Tough industry. HOWEVER, if you cannot trade, you shouldn't be taking hard-earned money from people. At least, a FULL or the minimum partial refund.

Anyways, I emailed their support team and they directed me to this dumba** "Kam" (telegram @kamgatsby) who is full of himself. So I messaged this guy accordingly asking when their service is back and that this is frustrating because we had paid for a service and did not get what is expected. Then this guy tells me that he lost 60k blah blah blah and that I shouldn't be complaining? So I went off on this guy and boom he blocks me... What a joke

NOW, I email Nick asking when the service will be back and if it does not come back I would like a refund. Still no response.

Some type of business these clowns are running.... real professional boys..... just kidding... I have saved all the messages and group and payment to expose these clowns to protect other traders from using these scammers service. These guys just made at least $24,000 USD scamming 80 people.

2 traders have found this review helpful

Scammed - had to get a CC Chargeback

Paid £800 for the full course and received absolutely nothing in return.

Had many back and forth emails with the so called support / owner who was no help whatsoever,

In the end I had to get a Credit Card chargeback as they refused to refund my money even though they gave me nothing. They just ignored my emails.

Terrible company, avoid like the plague.
2 traders have found this review helpful
Sort by:
Show: