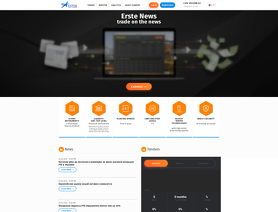 Service use: Live Length of use: over 1 Year
Rofx.net and Ester broker are a scam. They are cooperating with Ester broker and every day they produce fake trades for previous day.
This is a supposed service offered from them, but has exactly the same trades with Rofx.net.
They have offered to me, these trades to be copied on my MT4 account. All I had to do is deposit $14,000 to that account. As soon as I did so, I have asked to start copying these trades on my account.
In addition, see attached daily reports which shows that they are doing post-trade adjustments to trades, in order to show them as profitable (they reverse order type from BUY to SELL and vice versa). When I stated this on emails sent to them, they have replied with no-sense excuses, that my account is virtual, that my money is saved on their master account, and that they could do so, for my benefit. I have the email correspondence with them as a proof.
As soon, as I realized their scam, I have entered a withdrawal request for all of my money. The day after, they have produced around 500 fake trades, with big lot size, and wiped-out my account. Of course, these trades were not real. They have produced them in order to steal my hard-earned money. I have complained several times to them, and their response was that was due to a technical error of their EA, and they would take care of that. I have asked for my money back, but they were giving only promises.
As soon, as I threatened them that I would report Ester and RoFx for their scam activity, a guy, who presented himself as the Ester’s finance head manager, called me from London, from RoFx call center (I know this number because I have called RoFx a couple of months earlier for more information about their service), and tried to blame me that it was a risk that I took while I traded on forex, and they could not give my money back. He also offered me to deposit even more money, in order to invest in another system, they have. I denied to do so, but I lost my hard-earned money, and I cannot do anything about this, except telling my story to the people out there, warning them to stay away from RoFx.net and Ester broker. Bear in mind that Ester broker regulator cannot do anything about this.
I am at your disposal to present to you in a private chat, names, telephone numbers, even more screenshots, and MT4 daily/monthly reports which verify my story above.
On 5th August 2020 they intentionally created loss trades that wiped out my account - See file above "Statement - after fake loss trades - 21082020.pdf". That occurred immediately after placing a withdrawal request to get my $14,000 back to my bank account. As stated above, these are not real trades, but created only as an excuse for not returning my money back. Unfortunately, this can be done on a MT4 server. That's why Rofx.net trades are a scam.
Please stay away from Rofx.net and Ester broker. They are nothing more than a gang who cheat people.
More. Community discussion of this issue >>
1 trader has found this review helpful

Service use: Live Length of use: 6-12 Months
Update Nov 4th, 2019: As expected, they are Scam broker. On Oct 14th, I requested the withdrawal of 681.65 USD, so far withdrawal was not processed and my account balance shows ZERO:-) They also changed my MT4 master password so I can't access my account anymore.

Oct 9, 2019 - 1 Star I have the live account 6 months with them, funded with 1600 EUR, subscribed to their News trading/copier service with result -3.24 EUR since April 1st 2019. On September 27th, I decided to withdraw my funds so I requested a withdrawal via their Client cabinet. Since then, I didn't get any email from them (except SPAM News emails).
From facebook communication with their 'account manager' (I can provide screenshots here) I have very strong feeling they don't send any money back but I'll be happy if I'm wrong about this. I decided to wait 2 more days till Friday 11th before the legal steps will follow. If I get any new information I will keep you updated.
More. Community discussion of this issue >>
2 traders have found this review helpful
Sort by:
Posting Date Rating
Show:
5 10 15 50