Please read Ontega Reviews below and share your live trading experiences with this broker.

Ontega.com is part of Green Pole Ltd group. Known members of this group include UBanker.com. 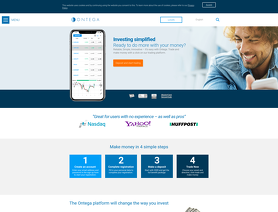 Service use: Demo Length of use: 0-3 Months
It is a company that calls you but does not do what they tell you. They talk to you about a minimum deposit of 300 USD and then when you go to withdraw and they do not let you, they put a lot of trouble and always make excuses. Be very careful they are SCAMMERS.

Service use: Live Length of use: Have not used
I saw a publicity posted on youtube about invest in "Amazon" so I asked for info about it and register. 2 days later a woman called to my cellphone, her name was Bárbara Rodríguez. At the beginning she was being very respecfull, patience and reliable, but later she tryed to convince me and even to force me to put my money in by threding me saying that if I don't she will report me as a person who will make all brokers lose their time so no one will never let me get in to other brokers.
In my experience, even when I was at all time respecfull, when I told her a definitely NO, she instanly became agressive and stared to call me (in diferent ways) a coward to later on hung up on me.
2 traders have found this review helpful

Service use: Live Length of use: 0-3 Months
You will not be able to withdraw your money once it is deposited, they contact you and try to guide you to the platform until you deposit
BE CAREFUL
3 traders have found this review helpful
Sort by:
Posting Date Rating
Show:
5 10 15 50