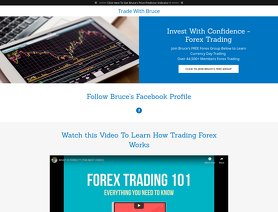 Service use: Live Length of use: 3-6 Months
Stay away from this scammer! He offered to pass your challenge in order to become a funded trader. He took my money and never delivered any service.

In short, this guy is an absolute charlatan.

Service use: Live Length of use: 0-3 Months
So to firstly give this some context, I'm a member of the 'VIP' group and have subscribed to Bruce's signal service for going on 3 months now, here's my personal experience and feedback.

Firstly, Bruce doesn't even trade the strategy he teaches and preaches in the diamond group, if he does then I can tell you he doesn't implement it in his signal group.. For the most part the signals are awful, somehow he more often than not manages to enter at a high or low before the market turns the opposite way which suggests he has no understanding on how the markets work. He rarely adds a stop loss and the risk/reward ends up being shocking.

There's no doubt that he is purely in it for himself, there have been multiple times where he's pretty much threatened to stop sending signals unless people go on his page to show their wins on the occasion he does have a winning day. To date I've witnessed maybe 2 profitable weeks, so as it stands the win rate is about 20% with 80% losses, when you take the poor risk/reward into account it's pretty tragic.

I saw a nice setup one day using the actual strategy he teaches in the 'VIP' group which I personally took, when I messaged to ask him why he didn't send it out as a signal to paying members the literal response I got was 'Just didn't'.

The way he makes money is through the memberships, there's currently 386 members in the signals group at $100 a month per person... That's $38,600 per month! That's where the fancy cars etc come from, not from trading!

I've been in this game a while now off and on and been bitten more times than I care to admit... I can see how people like this lure people in, it's all good when it's good... but you never see people posting their losing trades... What kind of guy pushes his members to share their winning trades yet disregards the fact that they're still losing overall? A guy looking for more members that's what..

What's funny is that if he used the strategy he actually teaches in the 'Diamond' group he'd probably have more success with the signals..

Be careful guys and girls, there are too many charlatans out there and Bruce is one of them.
1 trader has found this review helpful
J
Josef
Western Sydney, Australia,
Mar 12, 2022,
Guest

Service use: Live Length of use: 3-6 Months
I have been following Bruce for 4 months now. Started in October 2021and continue to follow him now in February 2022. For the last 4 months, he has overall been successful with his trading. Sure he has won and lost trades. However won more trades than he has lost. All 4 months have been winners. Lastly, He takes a big interest that all his subscribers are successful. I give Bruce 5 stars

Jan 21, 2022 - 5 Stars I have been working with Bruce now for about 4 months. He does an excellent job calling trades and staying within his system. Most of all Bruce has been willing to share his expertise and develop a relationship with me to ensure I am a successful trader. I give Bruce 5 stars.

Service use: Live Length of use: over 1 Year
I've known Bruce Webb for 4 years. I have obtain most of his products and services (some that work, so e that don't) but through the ups and downs, thrown the learning curves, he's been there offering another way to make my trading work for me. He's about 80 percent successful with his signal and his strategy for Manual trading is successful. He does not loose and his pricing is fare. I highly recommend Bruce if your looking for a side hustle or for changing your financial situation. Bruce Webb is the guy u need to know
R
Ravens2022
Chattanooga Tn, USA,
Jan 22, 2022,
Registered user

Service use: Live Length of use: 0-3 Months
I been following Bruce for 5 years. Once he said he was giving signals it was a no brainer that I got his service. Every since I have made over 4 grand dating back to Nov 2021. He is the best trader I ever seen.
S
shinoT
Akron, USA,
Jan 20, 2022,
Registered user

Service use: Live Length of use: 3-6 Months
I used to lose everyday not knowing what and how to trade. After a few session with Bruce he showed me what’s capable if i was patient and didn’t over leverage. He does tell you that you won’t win every time but my win percentage has went up drastically because of him. He is definitely a team player and wants to see people win. Thanks Bruce.
K
Kerra11
Seattle, USA,
Jan 20, 2022,
Registered user

He doesn't use stops

Service use: Live Length of use: 0-3 Months
This type of trading only ends one way, following bruce's trades using large lots and no stops will easily blow your account, that's what happened to me. Never again
Sort by:
Posting Date Rating
Show:
5 10 15 50
Page 1 of 2