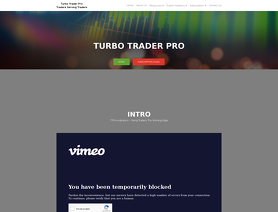 Join live discussion of TurboTraderPro.com on our forum

Interesting to see neg comments here. I have only praise for turbo trader pro. I have been copying their account through signalstart and had one loosing month with the rest being winners. This is forex and I'm not expecting a perfect result, there will be wins and losses with any account. Im ahead overall, the loss itself has nearly recovered and I have every intention of staying with them. They seem to be pretty transparent and their signals through the telegram group are from my experience some of the best I've seen. I have nothing but praise for this Company.
1 trader has found this review helpful

I've been trading using Turbo Trader Pro for almost two months now and all I can say is this trader provides incredible analysis. You can see the reason for the trades they pick and they have a near perfect accuracy rate! There are and there will be losses but I must say they are few and far between. Highly recommended!
1 trader has found this review helpful

This trade copy makes money, period! They are consistant with a decent monthly return and only ever had one loosing month in 2019 which has well and truely recovered as I write this. I have noticed a vast improvement with how they manage their trades since and Im more than happy to give a good review. Definitely recommended.
1 trader has found this review helpful

I’ve done some research on trading bots and this is what I think.

Your robot is a classic martingale bot. It opens trades one after the other hoping for a reversal significant enough to cover losing trades and end up turning a profit.
This can work very effectively providing it is closely monitored.
It makes its decisions purely based on technical analysis. It is incapable of utilising fundamental analysis. This is why it needs to be closely monitored, left to its own devices it will inevitably open trades that would not conform to fundamental analytics and would open more and more trades, even increasing the size of the trades to compensate the ever increasing number of losing trades. All of which are doomed to fail, as we have experienced.

These kind of robots are easily available in prices ranging from £0-100 or more. I’ve looked at them before and I didn’t buy. I didn’t want one then and I don’t want one now.

The only reason I can see for paying a monthly subscription to access one of these robots is to have an operator managing the account to make sure that it doesn’t get caught in the trap. If you had have told me that I was buying a robot that you would not interfere with I would not have bought in to it.

As I have previously said, what I wanted to buy and what I believe you confirmed was on offer, is the copy of a managed trading account using automated signals which would be acted upon by an operator. Managed, overseen and, therefore, protected.

Here’s the problem
1. If you did indeed manage the robot, you have failed spectacularly to avoid the inevitable. A skilled, professional forex trader managing a robot of this nature would have stepped in and stopped/paused the robot until the fundamentals once again lined up with the technicals. Given that you claim to be a professional trader and that you operated the account based on signals I feel you have not done what I have paid for.
2. If the robot was not, and there was no intention to, interfered with, I have not received the product that I was sold.

Either way, your product has been misrepresented and I have been misled and/or mis-sold.

My feeling is that I am entitled to be back in the position I was before buying into such a misrepresented offer.

I think basically you need to be more honest and open about what exactly people are buying into. You are constantly putting out screen shots of your trading accounts showing what is possible if someone subscribes to your premium, copy account etc etc. The truth is the vast majority your profits come from your 1min gold scalping that you have now told me is not available for anyone else to benefit from. I’m short, the trades you publish are not the trades that anyone can copy.
Failing be more honest will inevitably result in more and more misled and disappointed people.

May 6, 2020 - 1 Star My problem with this service is that the operator lied to me.
First I was told that the system needed careful management, then once the losses kicked in I was told the system worked via a bot and was not interfered with.

Also, the operator starts by suggesting that you can copy his trades. But the truth is you are copying a bot. They are not, what you might think of as ‘his trades’. The trades he publishes showing vast gains usually on gold are not available to be copied.
You pay a monthly subscription to do this. But these bots are available for anyone to buy online. You don’t need to pay someone a monthly fee!

This particular bot operates what is known as a martingale system. This works purely on a technical analysis. It cannot react to fundamental analysis. If due to some news event a trade goes in the wrong direction, the bot will continue to open trades that will fail. This is the point where the operator should step in, but as mentioned above, the operator does nothing. You might make money for a month, 2, or 3. But eventually you will lose.

Feb 6, 2020 - 1 Star This trader is offering a deal called “Copy my trades”
Before purchasing he told me that I was buying into an EA that provided signal which required an operator to act upon. Tony Born is the operator.
All went well for the first month, turning a profit.
At the end of the month losses amounting to 3x the achieved profit.
I was then told that the “Robot” autonomously opened and closed trades and was not interfered with.
I have now discovered that the robot runs a classic martingale system, which I believe if left unsupervised will inevitably result in losses.
First of all, I feel misled in as much as I am not copying a traders trades, I am simply copying a robot.
Secondly I bought into a supervised trading system, and that has not been provided.
The trader (Tony Born from Brisbane) often posted screenshots of his trades encouraging people to join his ‘copy trade’ deal, as well as telegram signal groups etc. He shows profits that are very impressive indeed. He has since told me that the vast majority of his profits come from an account (gold 1min scalping) that is unavailable for anyone else to benefit from.
He shows you what he makes, suggests that by copying him and following his signals, you can too. But, once you’ve paid your subscription he leaves you alone to lose money with his robot and gets in with his own gold scalping.
He’s been completely contradictory, dishonest and dismissive when I’ve asked questions.
Has any else had any experience of working with turbotraderpro.com?
Sort by:
Show: