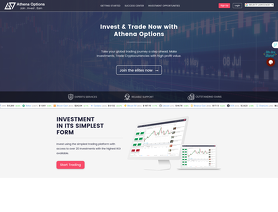 Join live discussion of AthenaOptions.com on our forum

I was looking for a professional trader to help me improve my trades and I was "highly recommended" to an "expert trader" name Jayden Mummery through Facebook group. I reached out to him via Facebook Messenger on July 10th 2020. Said he trades automated bot/software EFX Robotic. I found the website: https://efxroboticsoftware.com/ His commission is 20% of profit (no commission if loss). I thought well I have nothing to lose. Then he sent me to Athena Options to open an account (website: www.athenaoptions.com); said because this "platform supports his software trading" and he trades using "bitcoin algorithm".

I opened the account on July 11 2020. Said he only needed my username to program his software to trade; the account is fully under my control for money withdrawal, etc. I also had to buy Bitcoins from another company (creating another layer) to fund the the trading, so I funded my account with $10,000 Bitcoin for "Gold" account. Because there was about $150 fee to buy the bitcoins, so my account was just under $10,000 and was downgraded to a "Premium" account instead. After days of trading, my account had high profits but it froze due to "threshold". So I funded the account to make it above $10,000 in order to unfreeze it. The account grew much higher and got froze again due to "threshhold" again. So I funded the account above the $25,000 for "Elite" account with no more threshold. By this time, I had to get money from my credit card.

When I tried to withdrawal money, my scammer trader (Jayden) demanded that I pay him 10% up front payment before he approves my withdrawal. Apparently he had to enter the withdrawal code in his system. He didn't tell me about the up front fee or the withdrawal code in any of our conversations. After going back and forth with him. Also there was live chat on Athena Options website call tawk.to which seemed very real to me but they couldn't help me. Note: they were only available at a "convenient" time when the account was froze and needed funding. Never available for questions before and even until now. Also, they never answered their phone, which is suspicious. There were so many red flags but I was so stupid to ignore them.

After awhile, I sent the 10% up front, which was $20,000 Bitcoins to my trader scammer Jayden. Otherwise, my $25K principal and the $200K profits will be stuck in Athena Options account, which still is today. After I sent the payment, he entered my withdrawal request code in his system. The next day 8/5/2020 I received an email from payments@athenaoptions.com to fill out and sign a "tax form". I did. Note: the tax form was not an official form, just simple questions in a few lines with your name and sign. I didn't want to question, I just want to get my money out so I returned the form to them via email. Note: they don't reply to your emails. Then I received another email from them saying that I'm required to pay 20% of the profit, which would be $40K to the "tax department" before processing my withdrawal. Note: they didn't provide bank account information to send the money to (to avoid tracking). They expected to send Bitcoins to the same wallet address where I had sent my original deposits to invest. That's consider co-commingling.

This was when I realized that I was being scammed the whole time from the first scammer who "highly recommended" me through Facebook group to my scammer trader Jayden then to the scam company Athena Options. I told them to please withhold the 20% tax from my total withdrawal but they never responded. I told my trader about the 20% tax, he said it's a normal process. He even gave me 3 names of people who are on Facebook to ask about the process and the 20% tax. The names are: Leslie R. Deshazo, Cheng Yu-Wen and Dieter Moeller. I reached out to the first two people and they both "highly recommended" Jayden and said he is not a scam. Of course. Note: this was via Messenger - couldn't get them on the phone. They are all scammers working together.

They all have perfect English and all been trained of the process and tactic to scam people. I made this statement because I found another person who got scammed using the same tactic about a month before I did. Also, I was on my Facebook group today and another scammer was recommending to another trader name/profile Thompson Cornelius. On my scammer Jayden Mummery's Facebook posts, he had hundreds of people liked and commented to make him look legit. Note: All these profiles I looked further afterwards are all fake Facebook profiles. Over 400 of them!

I lost all my money including taking money out from my credit card and my HELOC all in about 3 weeks. A total of $45,000. I felt stupid, shamed, disappointed, hurt, stressed and couldn't sleep for days. I only hope to be able to help others be aware of this big scam operation and I hope to get the authorities attention to shut down this big global scam that is hurting honest and innocent people everywhere.
2 traders have found this review helpful
Sort by:
Show: