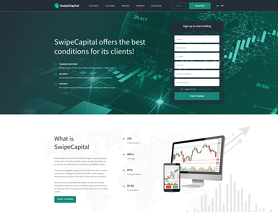 Join live discussion of SwipeCapital.io on our forum

I was conned into joining SwipeCapital.io by incomebright.com who I paid $100 USD to join for an educational trading course and an automated forex trading robot and also be referred to a forex broker in my region. I was given an account with SwipeCapital.io with my $100 USD in the account. SwipeCapital.io then called me to start me trading but I told them that I wanted a refund because they were not licensed and if they did not I would give them and incomebright.com bad reviews. I did receive a refund.
I paid the 100 USD to incomebright.com using PayPal so I thought everything would be all right. I have now notified PayPal about my experience so hopefully PayPal will withdraw their support from incomebright.com.
1 trader has found this review helpful

Unable to withdraw deposit. Do not use this company

Be extremely careful if you have already opened an account with this company. Don't make anymore payments. I would have cut loss and walked away much earlier if I knew what I know now.
We currently have an account balance of U$70k with no open trades and no open losses and have been unable to close account and or withdraw unless we make another U$25k. We have been told that unless we make this payment our account will be frozen and will not have access to the funds we have put in.
In the beginning everything was fine, the broker was very keen to test withdrawal. We got $100 very quickly and were given great signals and started making money. We then added more funds and made more money and was able to withdraw a % of profit. This gave us great confidence.
However, the signals aren't great anymore and we were advice to lock the trades to manage losses. With the locked trades, the broker starts using it to manipulate and pressure us to keep adding funds to get insurance needed to unlock the locked trades and if we do not make payments our account will be frozen. We were even encouraged to take loans from Moneyme to make payments. We were told that once the payment is made, the locked trades can be unlocked and we will be able to withdraw but it never happened as new excuses were made to refuse withdrawal after every payment, that insurance was rejected and we couldn't unlock the trades until we put in more money. We have finally realised that making anymore payments is just parting with our money.
Do not sign any bonus agreement. Eventhough the agreement says that clients cannot withdraw deposit bonus if trading volumes are not met, the broker has been twisting it to say that we cannot withdraw both deposit and bonus when it is clear that only the bonus should be forfeited if trading volumes are not met. We should still have access to the funds deposited less any losses.
We stopped trading as we noticed that it was used to manipulate our ability to withdraw as we seem to get bad signals that results in locked trades and locked trades are the reason used for withdrawal refusal. We are then pressured to put in more funds to undo that.
U$75k on of deposit, we were finally allowed to unlock all our locked trades. We took the losses which was reduced by the profits made and have U$70k left in the account but unable to access it unless we make another $25k. We were promised that we will be able to withdraw once we make the payment but we no longer trust the broker or company.
Sort by:
Show: