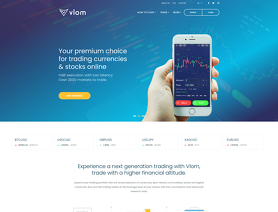 Join live discussion of Vlom.com on our forum

My money will be confiscated

Hello there. I'm David. I am complaining to Vlom company. My Account: 22066263137 Vlom The first 50 dollars, 2 weeks later I deposited 1700 dollars. Broker Huseyin n. He said if you make your account 10k I will earn better than stocks with complete risk free. Since he said it was risk-free, I put all my plans aside, gathered what I had in my hand, made my balance 10k on the 17th of March and started the transactions. 1 month as promised. If there was a wrong opened transaction, if they did not make TP from the place they put in 1-2 hours, they would intervene and change the numbers and make TP. Called the broker at the end of April: We agreed with a new bank, if you make 20k in your account you will get better income You will receive an e-mail, he said sign it. I did. Debt from friends, loans, my wife's gold, etc. I barely collected 4700 and added it to my balance. I made my deposit 14700. I called my broker I said help me find this much more than me. He completed it with a bonus of 5300. New transactions started. But the company does not deliver the profits it promises. In the meantime, I can't withdraw the money I need. My open trades are accumulating every day. Swaps, on the one hand, have already dropped a lot. Then the two wrong transactions they opened decreased to -8000s. At the beginning of the week, my broker closed all my negative transactions because the bank told me. Everything he earned in 3-4 months is gone. My account is 13200. 2-3 days to open large transactions. They brought my account to 14700. After this incident, although there was no TP at the time of the transactions they opened, on top of that, they increased my losses with ridiculous swaps. I was hospitalized one night with high blood pressure due to the stress of the money I lost. I came to myself after 13-14 hours. My wife panicked because there was no money, she wrote to the company that you hurt my wife online. After I came to my senses, my Broker deliberately started to make things difficult for me with his attitude towards Me. Your wife called the company, complained and the bank found out that I was helping you and they fined me. Now, make your account 20k or they will take 40k-50k money from you together with the commission as per the contract. The job will go to court. The contract also shows that it starts on May 5, 2021 and ends on June 7, 2021.One month (no new contract made) Currently my account is showing $15839. I can't helplessly do anything right now. They gave time until the end of the month, they said either make your account 20k or your remaining money will be confiscated and you will pay a fine. They took what I had in my hand

They do not honor what they promise.
They do not allow withdrawals of investments.
Do not return emails or chats
The advertised phones do not exist.
It's a fraud

This is in fact the VLOM broker.
A large-scale operation by GAECO dismantled a criminal organization that practiced financial pyramid crimes and money laundering throughout Brazil.
Agents of the Special Action Group Against Organized Crime (Gaeco) took to the streets of 12 Brazilian states this Thursday (25) to arrest the leaders of a financial pyramid accused of scamming thousands of Brazilians.
The “Black Monday” operation came from the Public Ministry of Minas Gerais (MPMG), which for almost a year has been investigating a fraudulent scheme promoted by the websites “Learn Investing” and “Investing Brasil”.
With the promise of great financial returns, victims were encouraged to make bank transfers to various legal entities through the “VLOM” and “LBLV” brokers.
Rather than investing the users' money in the contracted plans, scammers converted the values ​​into bitcoin and into high-value goods such as luxury cars. Between 2019 and 2020, the scheme caused a loss of R $ 60 million to at least 1,500 victims.

Jan 21, 2021 - 1 Star VLOM is a brokerage firm that is not making the payments due and every contact made in this regard is made some type of financial requirement for the client.
Leave this company.

VLOM https://vlom.com/
By Joaquim Neto, from Brazil, January 31, 2020 at 16:56 PM
I started to negotiate with this company, brokerage #VLOM, account ID 20529003885 and account ID 21369001735, in the year 2020.
A gentleman named #LUCIANO PEDROSA / VLOM, calling himself the #ACCOUNT MANAGER, and his secretary named # BIANCA / VLOM, came into contact with me through the Telegram application.
From then on, capital contributions were made to the mentioned accounts for investments through the # MT-5 platform in the stock market, gold, etc.
Then, according to #LUCIANO PEDROSA, fixed income investment opportunities appeared in the United States market, and also investment in the stock market in the company MDB (MONGODB INC). And we made such investments, observing a highly profitable operation in the standard way of earning with normal rates.
From then on, I was invited by the ACCOUNT MANAGER, Mr. LUCIANO PEDROSA, to participate in a #SCALLPER operation. The first session was successful, in the second session there was a loss of the full capital of the account ID 20529003885.
Immediately the person who was mediating the operation of SCALLPER the ACCOUNT MANAGER, #Sr. MAX, informed that he should invest a certain capital to redeem the account. And I did as he asked.
A posteriori, the account released for capital redemption, I receive the call from ACCOUNT MANAGER, LUCIANO PEDROSA, informing me, on 1/15/21, that the VLOM broker would not have the capital in cash to be able to release my money, as well like American providers. And that he should make a contribution, where he and the board of the brokerage VLOM would make an operation with the Asian providers to finally be able to withdraw my money.
That's when #Sr. ABRAHAM LEVY, who introduced himself as Senior Analyst at VLOM, on 1/18/21. And he said in a definite way that once the amount in question was contributed to the operation in the Asian market, the money would be available in my account in a maximum of 24 hours.

I then carried out the transfer of the certain amount.

THE ACCOUNT MANAGER, Mr. Max, made contact, on 1/19/21, so that we could make the withdrawal request together on the website of the brokerage #VLOM through the application #Any Desk, where he has access to my computer in a virtual way.

At 11:00 AM, on 1/20/21, I receive a call from Mr. MAX informing me that I should pay a fee of 1.7% of the total amount of the account, until 13:00 PM this day, to the Asian market, so that my money could be released. Otherwise, the amount would be retained. I would no longer receive the money that belongs to me that is being held, subtracted by the VLOM brokerage. The amount of the fee could be deducted from the amount in my VLOM brokerage account. Or, is the VLOM broker trying to withdraw even more capital from me?

#ABRAHAM LEVY / VLOM had not kept its word that was given to me decisively. And he deceived me in a vile and cowardly way. Still aware of my financial situation weakened by having contributed a certain sum to this VLOM broker.

I did not transfer the amount to the account in question:
Bank: Plural (125)
Branch: 0001
Account Number: 4640-0
Beneficiary: JUST PAGAMENTOS LTDA
HomeAbout UsContact Us
Refference: 21566-54438403
On 01/25/21 I received the contact from #Sr. ABRAHAM LEVY, where he sent me a letter on letterhead from the brokerage #VLOM, committing himself to transfer the money contained in my ID account 20529003885, in case the 1.7% fee was paid. This letter was signed by #ABRAHAM LEVY and #WASHINGTON J.J./VLOM, director of the brokerage #VLOM.
I reported that I no longer had the resources to do so and that I would not transfer the amount in question. For being a nonsense, since the value of 1.7% could be deducted from the amount I have in the account. The #Sr. ABRAHAM LEVY did not take my call for the return of my discounted capital at the rate of 1.7% seriously and did not contact me anymore.
Anyway, I live an unprecedented drama. A securities broker who is trapping a monetary value that belongs to me. And I need to survive.
My two accounts on the #MT 5 platform are blocked, and the brokerage #VLOM and her characters don't even make contact to resolve or even return my money. At every moment there is a problem situation so that I do not withdraw.
I suggest to all those who read this complaint that they do not pay to see the reality of this broker. It will be drastic and with irreversible consequences with the destruction of lives and families.
Sort by:
Show: