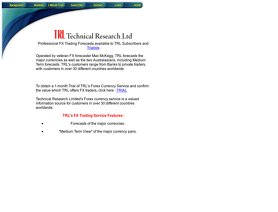 Join live discussion of trl.co.nz on our forum

Andre,
NZ,
Sep 30, 2008,
Guest
Max's forecasts are my most valuable daily trading tool and I've been subscribing for the past 8 years. He's been in the biz for decades - past head of FX trading for the Bank of New Zealand. I recommend him to all traders. I think he gives a months trial to test the service.

Marcus,
doesn't really matter,
Jan 8, 2008,
Guest
Already left review- rating removed That's a good way to put it, interpretive, he should be in an exegetics section and not in the trading signals providers, unfortunately, trading is not a philosophy or homiletics to interpret it, and your defence sounds like Max himself. Anyway, I am happy that you have a gift of interpreting but you know, the guy can keep buying against the trend 3 times with 3 stops being hit, so let's not make any aurora borealises here ok? No need to jump on the rail tracks for Max to save his service, to blame a trader is the easiest thing to do, what you need to do is to take responsibility and give an account for your trading forecasting signals, otherwise, this shenanigan with interpretetive stops and losses are a mere speculation. Good luck with your saving his reputation, your profits will be interpretetive as well, as you need a definite rigidly cut approach to managing finance and don' tell me about interpreting, otherwise, his site should be moved into palm readers' section, and not clairvoyants'.

Paul,
Ohio,
Jan 6, 2008,
Guest
I don't want to sound controversial but I would like to submit a reply to the previous post. It has to be remembered that Max is a froecaster, not a signal-provider. Forecasts are interpretive, and are not given on a silver platter like signals would be. The beter thing to do when price hit 1.4850 is to be patient and wait for the reaction at that point. Max did give a large window, so if you can't take the large stop loss, then just wait. Plus, there is no disgrace in missing one trade as opposed to getting your clock cleaned on that trade. I would respectfully submit that the trader wuold be to blamed, because price eventually turned in the forecasted direction. Most NFP days have been real good for Max, just like this mnoth was. There also is not a set criteria as far as a set amount of pips on a stop are concerned. If a 30-pip stop is still ni his support or resistance zone, then it would need to be further back, or once again, don't take the trade, orwait for price to go further in the contrarian direction, then enter. Also, Max has never had an intraday trade go back 200 pips. NEVER! If it was a bad trade, then it hit his stop, and that's the end of that pair for the day. The LT trade on the euro, Max changed that and showed the correction in his MT forecast. He made big pips, even though it turned a little before he said it would. He is still saying it will hit there, and go even further, but that is more LT. No one pays me for saying this, but I know Max is the best in the business. It has to be remembered that his forecasts are not a guessing game, but they are interpretive. This is not silver platter signals with entries, exits, sops and limits. They are even better, because they yield better pips than most services do. I don't mean to be controversial, but I know Max's signals work. Any trader is to blame if they can't make pips trading Max's forecasts.

Marcus,
Australia,
Dec 20, 2007,
Guest
I have tried Max for 4 month and even though never flushed my account to 0 on my own trading for 4 years, managed to get devastated following his signals with 30 pip stop losses. To say the least, there are good days, but his forecasts are usually helpless around medium-term bottoms and tops, the guy was still buying around 1.49 for 1.53, when it was high time to sell, eur/usd is embrasing 1.43 now, when his medium term outlook was totally helpless, his trades are good in quite rangebound markets, where many people can make money, but with the new releases I remember NonFarm Payrolls would just kill his forecast on both sides, I tried to trade with 30 pip losses from the levels he indicated in his forecasts, almost every day, I would get 3 or 4 losses out of 6 majors, of course, market would often come back to the level of previous entry, and Max would recommend buying, when it was just the time to get out of awkward position. I have lost 5k in a matter of a couple of month, when I thought that someone has a vision, sorry, he doesn't and if you rely on someone in your trading, who never says that he was totally wrong when there are dozens of trades where he is 200 pips wrong on GBP/USD in one day, there is no way you can click buy and sell, having burnt continuously with his signals, if you keep saying about religiously following his signals, talking about 2000 pips a month, it is a great shame on you as there is no way for his signals with 10-30-pip losses to produce such results. I have tried him for too long and it left me without money, even though I was making money on my own, if he kept a record of all his losses on 6 pair advertised, if there was an archive for you to browse through, then you would be amazed. The first principle of financial services, or providing financial analysis is accountability and reporting, in his forecasting there is only reporting for one day without any opportunity for clients to see what his signals were in the past. If you look closely at his signals, you will understand that the principle behind sometimes is like someone already mentioned is a guess game. First, there is asian update and then european, with daily outlook, here is an example from his example signal which is on his site, The Euro's complex correction persists and whilst Resistance at 1.4850/4900 contains,yields sell-off toward 4730,enroute 1.4600, http://trl.co.nz/sample/pages/sample.pdf.
For me as an intraday trader with say 1 lot (100k) or when I trade 5 lots, an approximate entry of 4850-4900 is good for nothing, 1 lot is already 500 range, 5 lots 2500USD range, what kind of trading signal entry is this???
and here is what happens, the market looks unable to overcome 4850, you sell at 4849, then all of a sudden it rises to 4900, you think, hmm, the stop is 10 pips abve resistance 4900 as advised by Max, it is already 60 pips away from entry, and then you get knocked out at 60 pips with 3k loss. And then market falls and you are unable to sell again, cause his signal gave you a boost of -3k to your account, this is a rough example, but once you try, you will see the way he gives forecasts and how many shortcomings there are, those 2 signals are purely not enough, and what happens is that market overshoots many of his expectations especially stopwise, which are rarely given, especially stops under "some level 1.4500" but he never tells you where, and then when market goes down to "1.4470" and rebounds, the following day he says, market rallied well as if nothing happened, when his stops were killed by 30 pips or more, but it is always well with him. To cut the long story short, I have tried it for a while and those short term successes that he has, are never enough to cover the losses which are never mentioned. If you set 10 pip stop losses on his suggested buy/sell limit orders, they are violated around 80-90%, trade wise, do not believe all these goodie-lewdie responses, if there was a way to get 2k of pips with his signals I would not lose all the money in the trading account. I probably sound bitter, but this is the outcome of his successful forecasting service that I tried for 190$ a month.

Brian,
Los Angeles California,
Sep 4, 2007,
Guest
I've subscribed to TRL's service and I'm very impressed. Max gives great technical analysis. I now rely on receiving his daily forecasts to help with my trading style and it's worked out great. I'd recommend his service to anyone.

Manuel Perez,
Brazil,
Sep 3, 2007,
Guest
The Elliot Wave Guru - a true technical analysis genius with invaluable insight for traders. Highly recommend Max's forecasting service which he has been providing for over 20 years. He offers a cheap trial for a full month - well worth doing. AAA+++

Paul,
Ohio,
Aug 12, 2007,
Guest
This guy is uncanny in his forecasting. He knows his stuff. He sends you daily forecasts, MT, and LT. I strongly urge everyone to get at least his one month special. I've religiously followed his signals for 2 1/2 years. I have no ulterior motive in highly recommending this seasoned, hard-working pro. I would have one ulterior motive in saying he is the 2nd best trader in the industry. That's because I'm a trader myself. I agree that 5 stars is not high enough for this guy. BTW, he always gives stop losses, and he does not trade the crosses--only 6 USD pairs.

Tim,
Aus,
Apr 12, 2007,
Guest
I know this guy for a long time and still using him forecasting. In fact, his cross is really bad, no stop loss and didn't tell you worthless if the signal run bad. his forecasting is profitable if you can guess. sometimes his reports are guessing games.
Sort by:
Show: