2.7 · 17 REVIEWS
Is this your company?
Forex Brokers
MetaTrader 4
2019-12-20:  CYSEC has announced that AFX Capital's license remains suspended. that a material amount of client funds at AFXCapital is missingm and that Unique Reference Numbers are not required to file complaints against AFX Capital with the Cyprus Financial Ombudsman.  CLICK HERE to confirm.
2019-08-27:  The UK FCA has announced that AFX Markets Limited is in special administration.  CLICK HERE to verify and to find contact information about recovering funds via the liquidators.
2019-07-19:  Cysec has suspended the license of AFX Capital Markets Ltd.  CLICK HERE to verify.
Other websites of this company include Tradealot.eu, Quantic-am.com, AFXGroup.com, market-technologies.com, and STOFS.com. 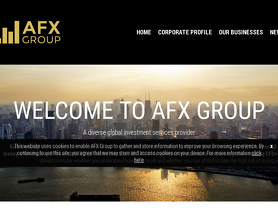 Join live discussion of AFXCapital.com on our forum

Stay away from STO (AFX). If you dare to make profits they will steal your funds

Stay away from this so-called broker (STO/AFX).

I too saw my trades reversed as the previous traders’ report.

Basically, my story is pretty much the same as the previously reported below, so I don't need to detail all aspects already detailed before.

I would just add a couple of interesting other aspects that show how badly this so-called broker can be trusted:

*Upon funds subtraction and conflict likelihood, tried to push me to the badly regulated Cyprus jurisdiction, away from the properly regulated UK*

Despite I had my account at STO under the regulation of the Financial Conduct Authority in the UK, upon my first contact to claim the unduly subtracted funds from my account, STO replied through its Cyprus entity. STO’s reply was written in such a away assuming that my legal connection with the company was though their Cyprus entity and not STO UK.

Naturally, had I replied back without questioning that stance from STO, I would basically be accepting that my legal binding with STO was with their Cyprus entity and thus any foreseeable claims (that surely they were already counting with) would be done at the “non-functional” Financial Ombudsman at Cyprus, not the UK.

To me this was a clear warning sign, at the beginning of the claiming process of the "bad faith" (mala fide) the company was already applying to limit possible impacts, as it’s well known that the Financial Ombudsman in Cyprus doesn't function and even if they issue a decision it's non-binding and if the broker doesn't accept it, the only left possibility for the trader is to claim your rights at the also non-functioning Cyprus courts of law.

Even though STO was obliged to answer me back within 8 weeks of my claim, the fact was that this deadline was burned without any reply from STO. I waited a few more days and still no answer.

Long story short: It was necessary several reminders and requests to obtain an answer from STO so I could receive STO’s decision over my claim, more than two weeks after the deadline.

Again, this clearly shows the starting position from STO. They knew that their legal base to subtract funds, that had been legitimately won in the market, was very weak. Therefore, it was paramount to avoid an effective follow-through of the process. Maybe if STO avoided to reply, I would drop the case, by forgetting about it, or by exhaustion... Only when I started to send reminders, one after the other, demanding their final response letter, already quite delayed and violating their obligation to provide a decision of the claim within 8 weeks, they realized there was no point in trying to avoid a final response. An absence of final response could in fact turn against them very badly, in the Financial Ombudsman in the UK case I am about to open.

When disputes occur with STO, do you want to check what happened at STO price charts and compare it with other brokers??

This alone is very, very serious to me and I would expect a note of explanation (even if crazy), since I pointed that out in my initial claim. Surprisingly STO's final decision didn't even address the issue. This is another evidence of the bad faith and planned intent to subtract funds, when traders manage to make good profits in the market.

I must admit I was very naive and believed STO would give proper care to my claim and realize I was in my right to claim back the profits that had been unduly subtracted by STO. Therefore, I maintained my funds at STO from end of May (when the claim was made) until mid of August (when I realized finally that STO was acting in bad faith, because they were refusing to provide their final decision, even after 2 weeks of burned deadline and several reminders sent).

Upon no answer from STO to my claim, even after 2 weeks after the legally mandatory deadline and several reminders from my side, I decided to request STO a full withdrawal from my funds (only the undisputed amount at the account).

Previously to the issuance of my withdrawal request, I contacted my account manager to make sure all withdrawal requirements (bank documents, method of withdrawal etc.) were in place.
I didn’t want any additional disputes or confusions with STO, so I made sure not to make any errors in the withdrawal order that could provide an excuse for STO to stall the withdrawal.

After several days, however, funds were still parked at STO. All the details are quite boring to share here, but when I contacted STO and demanded my funds back, they invented a lot lies to stall and delay the retrieval of the funds, such as missing documents, there was no withdrawal request from me,etc.

After another round of emails and chat sessions, I finally managed to get my funds back with no other requirements. All their obstacles to process the withdrawal were pure lies, just aiming to stall and again create exhaustion in the customer.

I could point out still many other small details to show how skewed STO line of action has been, but with the details shared by other traders below (that also apply to me) and my experience described above, I think this is quite enough to show that this is just another classical case of a trade that went very badly to a B-Booking broker. As such STO decided to steal profits back from customers to avoid a big loss in their financial books.

It’s so typical to see bad brokers in the marketplace coming up with ludicrous explanations and justifications to justify the stealing of profits to cover losses that result from high-risk B-Book brokerage model, when it would be so easy to show that the broker was acting in good faith: Why didn’t STO show in their final reply/decision letter that it cancelled not only the profits from customers that profited with this TRY price action, BUT ALSO the losses of the traders who took the other side of the trade, since the arguments to cancel profits should be the same as the arguments to cancel losses ?

To operate a B-booking model this way is very easy…when things go south, instead of just accepting the risk inherent to business model the broker has chosen, it’s easier to steal the profits from the customers…smart guys…

I am naturally proceeding to Financial Ombudsman in the UK to get my funds back.

Re: STO-AFX Markets UK
On the 23 May 2018 I placed trades selling the EURTRY this was to trade the macro-economic data release. The Turkish Lira spiked downwards 2000 pips for a successful trade.
AFX reversed the trades on one account the same day and a few days later reversed them on the second account. After sending two emails I finally received a response on the 1st August 2018 concerning my complaint, a deliberate delaying tactic.
It also took some weeks along with many requests to withdraw money from my accounts.
The STO UK pricing was very similar to other brokers and proves the pricing was valid.

This broker cancelled profits and moved funds without consent

I am also placing this review on the STOFS.com page.

The market was falling on a 2,000 pip move and all brokers honoured my trades except STO (AFX Markets). STO executed the trades and even issued a confirming statement. 5-days later they refused the payout of my profits.

In order for the broker to remove my profits, they needed to move funds from another of my trading accounts. These funds were moved without consent. Following this unauthorized transfer, $3,910.21 of profits was then removed in a second transaction.

I have provided evidence of the same trades being honoured by another broker but STO (AFX Markets) has refused to even acknowledge this. The broker’s terms and conditions allow them to adjust pricing - however they have taken advantage of this situation and have reversed the orders. The broker responded to my complaint exactly 8-weeks to the day - a delay tactic of theirs to deliberately prolong the complaint process and outcome.

I RECOMMEND TRADERS AVOID THIS BROKER AND THEIR DODGY BEHAVIOUR - I have now removed all other funds from this broker before they are stolen and am now proceeding to the Financial Ombudsman Service to resolve this matter.

forexmagical,
Pakistan, Pakistan,
Jan 1, 2018,
Registered user
this bad broker closed our pending orders today even market is close today on 01/01/2018 and Also Spread 800 to 900 points never seen before in my life this type of scame

I created a PAMM account in AFX Capital (Super Trading Online) to trade on my customer's behalf. My customers were fairly treated and withdrawals executed. However, I never ever got paid the performance fee or the rebates we had agreed. I gave up now. About 3k or so. Beware.

Mark Smalling,
London, United Kingdom,
Jul 26, 2016,
Guest
Great spreads and comms.
Use these guys and activtrades.
Both been real good.
At least with FCA broker your deposit is safe.
I use a mix of scalping and long term trading.
Recommended.

Marcelo Sivas,
Madrid, Spain,
Jul 5, 2016,
Guest
One of the better ones I have found.
the DMA account is best.
Have tried Ironfx, easytrade, hotforex....didnt like them much.
Have used them now over 4 months, never a bad fill or trade rejection.
Much, much better than I expected.
I have done scalping, etc, and made lots of withdrawals, no questions asked.

Peter Hall,
Stoke On trent, United Kingdom,
Jun 27, 2016,
Guest
Hi,
I use the UK version, SuperTradingOnline.
Amazing spreads and conditions.
Fast withdrawals.
used FXCM and Gain in past, this much better service.
Happy to recommend.

Lok,
, Hong Kong,
Jun 28, 2015,
Guest
SCAMMER!!
My account balance was USD163166 and I made a withdrawal request of USD118000 on 22/09/2014. But AFX hold up the money with excuses of account investigation. After 5 months, they informed me my trading activity was suspicious without any substantive evidence, and eliminated all profits I made. I’ve never committed any dishonest trading activities. AFX was fabricating fact to reject funding me.
Sort by:
Show: