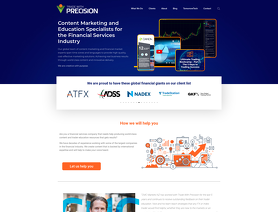 Service use: Other
This company will not cancel my account after 6 months of emailing and contacting admin. Once to sign up, it’s impossible to close your account. Garbage
J
Josue Delicat
Florida, USA,
Oct 27, 2019,
Guest

TWP is a company of thieves who are not professional traders

Service use: Other Length of use: 3-6 Months
They are not professional traders. They are amateurs who are regurgitatiing
some silly notions that they learned I don't know from where. I lost a lot money
because of there jerks.
F
Filip
Czech Republic, Czech Republic,
Aug 27, 2019,
Guest

Service use: Live Length of use: 6-12 Months
Great educational company. Straight forward advice and very helpful administration. I recommend it without a doubt.
B
Brett Morrow
Wanaka, New Zealand,
May 16, 2017,
Registered user
I am new to the whole concept and came across TWP purely by accident listening to Radio Live one day in Queenstown. It got my attention and short version is I follow it up, did some research and have started Training To Trade. To date I have found the staff very helpful and my gut instinct tells me they will help me as much as I need to be helped. There is no doubt you will get out what you put in. I have been distracted with family circumstances recently so have not been able to focus on my training but am now ready and willing to get back on track. Have made a significant investment in my training with TWP so i want to do justice to myself by giving it my best shot. The technical understanding of how to actually place trades and read trades can be daunting. If I had any slight criticism it would be that for those of us not quite as sharp as others on the practice technical computer operating front, it may be good idea for the trainers to analyse just how up to speed the pupil is right at the start. In summary, I am happy with my decision to join TWP and look forward to Training To Trade.
R
Roderick Burdon
Carmarthenshire, United Kingdom,
Apr 16, 2017,
Guest

Effective and worth the money

I came upon Trade With Precision through the programme they run for ETX Capital (free if you sign up to ETX and deposit Min £100). This took me from complete, clueless beginner to studying charts, spotting set-ups, applying the qualifying rules and starting to trade with a fair idea of what I am doing. I'm still a bit tentative so I have also signed up for TWP mentoring programme. I cannot recommend them too highly
V
vitalhelpfornewbies
New Zealand,
Feb 14, 2017,
Registered user

You will lose all your money with this company........but that is none of my business.

This is just another company that preys on beginners!

They promote making big money if YOU put the work in, they say it requires discipline and you will make it!

They do not tell you that most who will take their course will lose all their investment, and possibly much more! (but .........it is in the disclaimer)

They do not have any statistics of traders who have passed through their doors and made it or failed......wonder why?

The owner does not share his trading results ( big red flag, the best do ).

The owner is a slick talking salesman......they usually are. This is how they really make their money.

Tried to get my course money back when I found out their star trader who helped sell me, went to jail. No refund!

If they really cared about your future they might tell you that most sitting with wide eyes in the class will be pulling out their hair within a few months..........but that it is none of my business and unfortunately none of theirs.

Everyone gets a pair of rose tinted glasses.

Stay away from these people!

I have found TWP to be a excellent in terms of it's education for anyone serious about learning how to trade.

There are many things that one has to learn and essentially self-teach but the fundamentals of their trading strategies are excellent.

The one thing that attracted me to TWP was that they didn't sell you the idea that if you bought one of their packages, you would be a professional trader, quit your job the next day and put the Maserati dealer on speed dial, like so many unscrupulous providers out there do.

No, it was a more measured approach, informing you of the dangers, the reality of trading and good practice. Sure, you pay more than you would to but you get what you pay for, right?

All in all, thumbs up from me.

4) They teach important aspects of trading that many neglect to. The more I learn, the more I realise how there are many other aspects of trading that are as important, if not more important than just setups:
a) Psychology. I thought I would have no problems with this as I am a fairly stable sort of person who thinks logically (I think anyway) and I couldn’t see how anything to do with emotions could upset my trading – look for a trade, put it on and take the profits.
It doesn’t take long to discover this is one of the most important parts to trading- how would you react after 5 losses in a row and then another trade comes long? Would you be tempted to take profits as soon as you got some just so you could have a winner (instead of letting it go further) or would you even avoid taking the trade altogether?
TWP helps you learn about all these challenges and how to handle them and they have access to experts who give whole courses on this subject if required.
b) Risk and money management.
The importance of the amount of your capital that you risk on any one trade is stressed over and over again. They suggest you risk no more than 1% on an individual trade. This is such important advice.
On my first trade I risked about the cost of a kiwifruit by mistake; not knowing my trading platform well enough. For a long time I risked about the price of a coffee because I wanted to learn to get good at trading without paying a high tuition fee in losers. Being conservative (frugal), I could learn my lessons just as well from losing $5 and as I could from losing $100 and it cost me a lot less. TWP may not agree with these amounts but they emphasise what the professionals risk, that we should do what they do, and if we do, we will be around long enough to gain the experience to become a consistently successful trader.
c) Trading records and screenshots. They teach you about the importance of records and keeping screenshots. I have found these to be very valuable to enable me to look back on. I can see how my trading has improved, what has worked and what hasn’t, and it has provided a great resource to analyse for improving my trading in the future, for example, the percentage of winners for lower time frame trades when the daily has had a big move compared to when it is just starting to run.
TWP asked for references and I am happy to give one as I know through being a vet that “word of mouth” recommendations are the most important source of clients that there is. People only recommend someone if they are happy with the service and I have received fabulous teaching and training from TWP. If it weren’t for them, I wouldn’t have managed to get anywhere near as far with my trading as I have managed to date. I still have a long way to go but I have been given a great foundation to build on and ongoing support is there for me if needed.
By giving a recommendation, it may help others to make the right choice to give their trading ambition the best chance to succeed. When I first became interested in trading I searched the internet for reviews on trading companies. The one I had read about in a book turned out to have lots of bad reviews. I then came across TWP who had only good recommendations. In a photo, I recognised some of the traders lived in my country, rang them up to discuss my wishes and then joined. I am happy I did.
So, if you are prepared to put in the effort, pay the price (time and money) and are willing to persist even when the going gets tough, then I think you would give yourself the best chance at success by receiving your training from the folks at “Trade with Precision”.