What is going on with Bitcoin?​

This is the 10th installment in our ten-article series, dedicated to providing our readers with the theoretical background necessary for an understanding of the cryptocurrency space. Today, we will look at what is going on with Bitcoin – why its price has been dropping like a stone in the last two months. Is this a result of a change in its valuation or intrinsic value, or caused by non-economy-related factors?

Before we begin, we remind our readers of our previous article, which focused on the price and value of Bitcoin. There, we discussed the factors that contribute to Bitcoin’s rather fragile economic foundation and intrinsic value. But this is nothing new; many analysts and traders have been talking about this for some time.

In Bitcoin’s relatively short life, there have been significant price drops and events, such as the collapse of the Mt. Gox exchange. Nevertheless, after each drop, Bitcoin managed to rise from the ashes. Now, we see a similar situation. Or is it worse, perhaps?

So, what factors and events might be responsible for Bitcoin’s recent drop below $5K?

Event #1: The probe into Tether and Bitfinex

Bitcoin’s recent price drop coincides with the new legal scrutiny of the leading stablecoin Tether and the popular margin-trading exchange Bitfinex almost one year after both received subpoenas from US authorities. (For more information, see “DoJ Bitcoin manipulation probe homes in on Tether and Bitfinex.”)

Back in May of this year, the United States Justice Department (DoJ) – in collaboration with the Commodity Futures Trading Commission (CFTC) – launched a criminal investigation into whether crypto traders were manipulating the price of Bitcoin. The probe focused on tactics such as wash-trading and spoofing – a practice in which large orders are placed in an attempt to influence the direction of price movement, only to have the order “wall” pulled once orders begin closing into it.

In our first article of this series, “All you need to know about Bitcoin and the blockchain,” we explained the theory behind the so-called “forks.” Who could have imagined that such a thing would take place so quickly?

Bitcoin Cash’s hard fork of November 15, 2018, resulted in the creation of two new cryptocurrencies, Bitcoin Cash ABC (BCHABC) and Bitcoin Cash SV (BCHSV). Both are listed on exchanges and battling each other for dominance. “So what’s the problem? BTH is also is a fork of Bitcoin,” one might argue. Yes, this is true but, in this case, we are dealing with a hard fork, not a friendly attempt to split the blockchain.

To give our readers a better understanding of why this is a problem, let’s look at how Investopedia defines a hard fork: “A hard fork, as it relates to blockchain technology, is a radical change to the protocol that makes previously invalid blocks/transactions valid (or vice-versa). This requires all nodes or users to upgrade to the latest version of the protocol software. Put differently, a hard fork is a permanent divergence from the previous version of the blockchain, and nodes running previous versions will no longer be accepted by the newest version. This essentially creates a fork in the blockchain: one path follows the new, upgraded blockchain, and the other path continues along the old path. Generally, after a short period, those on the old chain will realize that their version of the blockchain is outdated or irrelevant and quickly upgrade to the latest version.”

As a result of the fork, major trading platforms have halted the trading of Bitcoin Cash (BTH) and converted existing positions into Bitcoin ABC and Bitcoin Cash SV:

The problem created by the split is that different clients’ programs of the ABC and SV blockchains can’t work together. Most trading platforms support Bitcoin ABC, which has a higher market cap. In addition, the Bitcoin SV project was attacked a few days after the fork, during the reorganization of its blockchain. Experts like Olivier Janssens say that this attack may have been an attempt to freeze Bitcoin SV assets on the exchanges and prevent a sell-off. Although this is only conjecture, it does suggest that Bitcoin ABC followers may be responsible for the attack.

Analysts agree that the fork may have triggered the collapse of Bitcoin because five days later, on November 20, its price dropped to ~$4,400.

The fork could contribute to a further drop in the price of Bitcoin and other cryptocurrencies since it is impossible to foresee what surprises may be lurking around the corner. They are unlikely to be positive since the showdown between ABC and SV followers is far from over.

The month of November was fraught with problems for the cryptocurrency sector to which we can add November 20, when the Douglas-based crypto mining host Giga Watt filed for bankruptcy in Washington’s Eastern District Federal Court, claiming less than $50,000 in assets with its largest creditors owed nearly $70 million.

At this point, we should point out that mining, in general, is not what it used to be. According to a report published by Susquehanna, a global quantitative trading firm, those who are mining Ethereum using pricy graphics processing units (GPUs) are not able to earn profit from the mining operation. In contrast to last summer, when miners were pocketing $150 for each mined Ether, this month, the profits were zero.

Susquehanna’s semiconductor analyst, Christopher Rolland, wrote the following in a note to clients: “The combination of those factors means that mining Ethereum using a GPU, Nvidia’s flagship graphics card, is ‘no longer profitable.’ We estimate very little revenue from crypto-related GPU sales in the quarter, consistent with management’s prior commentary that they were including no contribution from crypto in their C3Q18 outlook. 3Q18 mining profitability continued to decline, as Ethereum prices have fallen more than 70% since the beginning of 2018.” 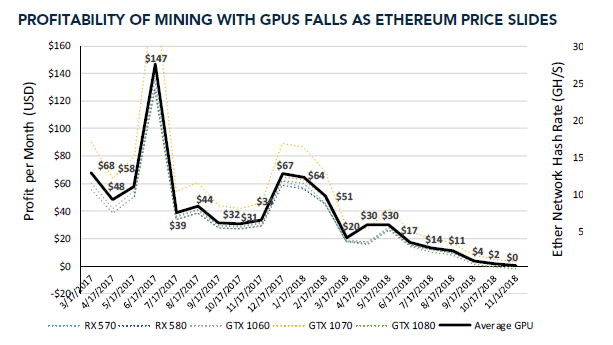 This is likely an accurate reflection of reality because, as you can see in the chart below, Nvidia’s stock price also dropped sharply, resulting in the company losing 50% of its market capitalization in a few weeks:

Event #4: The postponement of Bakkt

ICE Exchange representatives announced that the postponement was due to “routine work” and urged that people not look for hidden reasons behind the decision. Nevertheless, experts believe that the delay did contribute to the collapse of Bitcoin’s price since this is a major and highly-anticipated event.

January 24, 2019, when Bakkt Bitcoin (USD) Daily Futures Contract is scheduled to launch, promises to be a very important day for the sector. Some are of the view that Bakkt will attract institutional investors to Bitcoin trading, leading to explosive demand. This view is supported by a senior analyst of Fundstrat, Thomas Lee, and by Michael Novogratz, founder and chief executive officer of Galaxy Digital Capital Management.

According to Financial News, Mike Novogratz – one of the highest-profile cryptocurrency investors – believes that Bitcoin will shrug off its 2018 slump and return to $20K in 2019, as institutions and custodians take more interest in the sector. The reasoning is that the Fidelity Digital Assets and Bakkt platforms will make the process faster and easier.

As you can see, although the events of recent weeks have been momentous, they can hardly be described as positive. In fact, the general sentiment is that we are in a “bear market,” and this is understandable. Mining profitability is dropping. The crypto rush, with the jump of Bitcoin to $20K+, has been snuffed out. The news is full of reports of fraud and other problems, like Bitfinex and Tether, or the Bitcoin ABC and Bitcoin Cash SV hard fork squabble. To make matters worse, blockchain features, which were widely proclaimed as advantages because they ensured its stability and reliability, are being called into question.

All this negativity, which is only exacerbated by the lack of regulation and transparency, may shift the public’s view of the sector. Nevertheless, the “phantom” hope for an influx of institutional investment with the launch of Bakkt lives on but could deflate if no insurance company, hedge or pension fund commits funds in the space. And this would make sense… If you were the manager of an insurance company, would you put money into Bitcoin? I’m inclined to say no, you would not. And your decision would have nothing to do with the absence of crypto-trading instruments, such as futures contracts; it would be based – and reasonably so – on regulations, safety, and reliability that no cryptocurrency can boast to date. It’s difficult to believe that hedge funds could not find ways to invest in the sector, and that they’ve been sitting on the sidelines waiting for Bakkt to launch!

Recent events are certainly a “cold shower” for the crypto world; it’s no surprise that they fuel extreme and opposite opinions about the price of Bitcoin. As already mentioned, Thomas Lee expects that Bitcoin will scale back to $15K in 2019.

On the contrary, Anthony Pompliano, the founder and partner of Morgan Creek Digital Assets, writes in his blog that most ICO startups do not understand how bad the situation is. Their capitalization has dropped by approximately 50%. Not only that, they would have to return money to investors if the SEC obliged them to do so. At present, the SEC has strict control over ICO startups. Investors’ funds will have to be returned in dollars or other fiat currencies, and this could lead to new wave fund bankruptcies and cryptocurrency sell-offs.

The 50-70% exchange-rate drop of Bitcoin only makes the problem worse. It’s unlikely that any fund can show such a high rate of return to compensate for the rate difference. This is will likely spiral into sell-offs, putting ICOs and Crypto Fund Managers in hot water. Therefore, a Bitcoin drop to $1,500 does not seem far-fetched.

As you can see, the downward pressures on the price of Bitcoin can be traced to the roots of blockchain technology and its algorithms, as well as to the cryptocurrency sector on the whole. No one knows what the future holds. The only certainty is that history is in the making and that it’s very interesting to watch!