This month, the crypto market shows good performance, volatility, and trading opportunities. In general, it fulfills expectations and begins the long-awaited retracement. We’re keeping a close watch for two reasons: First, because this good setup for short-term trading, and second but more important, because the destination should provide an “investing point” for long-term bullish positions on Bitcoin.

Although the market has been behaving as anticipated from a technical perspective, certain developments, which are in progress, should greatly impact the sentiment in the medium-term. Nowadays, hacker attacks, hard forks, and news of this kind surprise no one. When Bitcoin was young and trading was in the foundation stages, such events were important. At present, investors and traders watch for other things, like regulation, institutional investment, and government activity. The market’s ambitions are constantly growing and involve big companies and the authorities.

As usual, we begin this month’s report with the most important positive and negative developments, trying to understand how they may affect the market in the medium-term.

Coinberry leads the way in Bitcoin adoption in Canada. The company announced a second municipal partnership – this time with the City of Richmond Hill – to process tax payments made in Bitcoin. According to Deputy Mayor Joe Di Paola who moved the motion:

“We believe that the demand for a digital currency payment option is only going to grow in the coming years, especially amongst millennials. Our Council was aware of Coinberry’s successful implementation of a digital currency payment service with the Town of Innisfil, and since there was no cost and no risk to the City of Richmond Hill to do the same, it made the decision that much easier for us.”

The most bullish of Bitcoin backers can now bet on it soaring to $100,000.  U.S.-regulated derivatives exchange LedgerX unveiled a call option that pays off if Bitcoin surpasses that price by December 2020. Such a move would imply a ten-fold increase from the current price, taking Bitcoin’s market cap toward $2 trillion.

LedgerX’s statement clearly indicates that there is interest from institutional investors – this supports BTC in long term. Moreover, the approval of this contract by the CFTC should have a positive psychological impact, especially if there is demand.  According to LedgerX CEO Paul Chou:

“There appears to be a critical mass of adopters ready to come on board on Day 1 of the Bakkt launch, with the sales team gaining traction among brokers, market makers, prop trading desks and liquidity providers. […] As we have written before, Bakkt tackles many of the barriers to adoption for traditional investors seeking to expand their mandate to include crypto.”

Earlier this month, Bakkt competitors ErisX and LedgerX secured licenses from the CFTC to act as custodians of physically-settled Bitcoin Futures contracts. This could encourage more exchanges to work on the Bitcoin Futures product.

Japan To Lead Development Of SWIFT Network For Cryptocurrency

In an effort to fight money laundering, Japan’s government is leading a global push to set up an international network for crypto payments. The system would be similar to the SWIFT network used by banks.

Fidelity recently filed to secure a New York trust license, which will enable them to serve their clients in a variety of crypto businesses. This move will put Fidelity Digital Assets Services in direct competition with popular crypto exchanges and custodian-service providers like Coinbase, Gemini, and Paxos.

Currently, the company is offering crypto-custodian services in a few states and if the application is approved, New York will be added to the list. As reported in May, the company also plans to expand its storage business with crypto trading solutions and investment options. The firm may even offer broker services to trade on behalf of institutional clients.

Binance Margin Trading allows users to leverage their digital assets as collateral in order to borrow funds from the Binance exchange to help them create leveraged trading by a margin and provide potential amplified gains within the cryptocurrency’s bear and bull markets. According to Binance CEO Changpeng Zhao:

“This is another step in providing an inclusive cryptocurrency trading platform catering to the needs of both advanced institutional traders and retail traders under the same roof.”

The governor of the Central Bank of Iran (CBI) announced that the government is planning to authorize crypto mining despite that there is no regulation allowing its legal trade in the country. Hemmati said:

Some believe Iran could use its abundant sources of off-peak electricity to feed farms because it could generate wealth for the country at a time of increased economic pressure by the United States.

German Central Bank  – “Crypto-tokens are not a risk”

In a speech given at the 2nd EBF Cloud Banking Conference, Burkhard Balz, Member of the Executive Board of the Deutsche Bundesbank said:

“While no one can predict the future with certainty, we know one thing for sure – digital transformation is here, it’s now and it’s big. It changes the way we live and work. […] Crypto-tokens currently do not pose a risk to monetary or financial stability. Yet gaps may occur where they fall outside the scope of regulators’ authority or where there is an absence of international standards.”

Cyprus: Blockchain Draft Bill to be Ready This Year

The finance minister of Cyprus, Harris Georgiades, said that the country’s blockchain regulation draft will be ready this year. Local outlet Financial Mirror reported the news on July 4 with the following:

“Full implementation of this technology across the public and private sector is expected to radically change the structures of modern societies, the way they are organized and their operation.”

The Singaporean government’s taxation agency is proposing to remove goods and services tax (GST) from crypto transactions that function or are aimed to function as a medium of exchange. If the draft passes into legislation, starting from Jan. 1, 2020, changes will take effect to “better reflect the characteristics of digital payment tokens.”

“Digital currencies such as Facebook’s planned Libra raise serious concerns and must be regulated as tightly as possible to ensure they do not upset the world’s financial system,” Group of Seven finance ministers and central bankers announced on July 18.

Libra has been heavily criticized by policymakers around the world, including U.S. Treasury Secretary Steven Mnuchin and Federal Reserve Chairman Jerome Powell. Finance Minister Bruno Le Maire of France said the group opposed the idea that companies could have the same privilege as nations in creating means of payment but without the control and obligations that go with it: “We cannot accept private companies issuing their own currencies without democratic control.”

In a summary of the informal G7 talks, the French presidency said the ministers and governors agreed that, “Stablecoins and other various new products currently being developed, including projects with global and potentially systemic footprint such as Libra, raise serious regulatory and systemic concerns.”

US Treasury Chief Says Crypto Is A “National Security Risk”

“This is indeed a national security issue. […] Cryptocurrencies such as Bitcoin have been exploited to support billions of dollars of illicit activity like cyber crime, tax evasion, extortion, ransomware, illicit drugs, and human trafficking.”

He added that Facebook’s Libra “could be misused by money launderers and terrorist financiers.”

D. Trump keeps the same position in relation to cryptocurrencies

President Trump said cryptocurrencies are not money and that,

“Unregulated crypto assets can facilitate unlawful behavior, including drug trade and other illegal activity. If Facebook and other companies want to become a bank, they must seek a new Banking Charter and become subject to all Banking Regulations.”

The strong comments from the most powerful U.S. financial regulator underscored the growing regulatory hurdles facing the proposed cryptocurrency, which has drawn scrutiny from policymakers globally. Jerome Powell said during his semi-annual testimony on monetary policy before the U.S. House of Representatives Financial Services Committee:

Powell also said that any regulatory review of the project should be “patient and careful.” He noted that existing rules do not fit digital currencies.

“Only a fool would trust Facebook with his or her financial wellbeing. But maybe that’s the point: with so much personal data on some 2.4 billion monthly active users, who knows better than Facebook just how many suckers are born every minute?”

Is Bitcoins’ Increasing Correlation with Gold Backed by Common Cause?

“Until now, Bitcoin has moved independently of any other asset class. This is primarily because of its ambiguous nature. However, we can see the price of gold (yellow) against bitcoin (blue) have been moving very similarly since the beginning of May.” 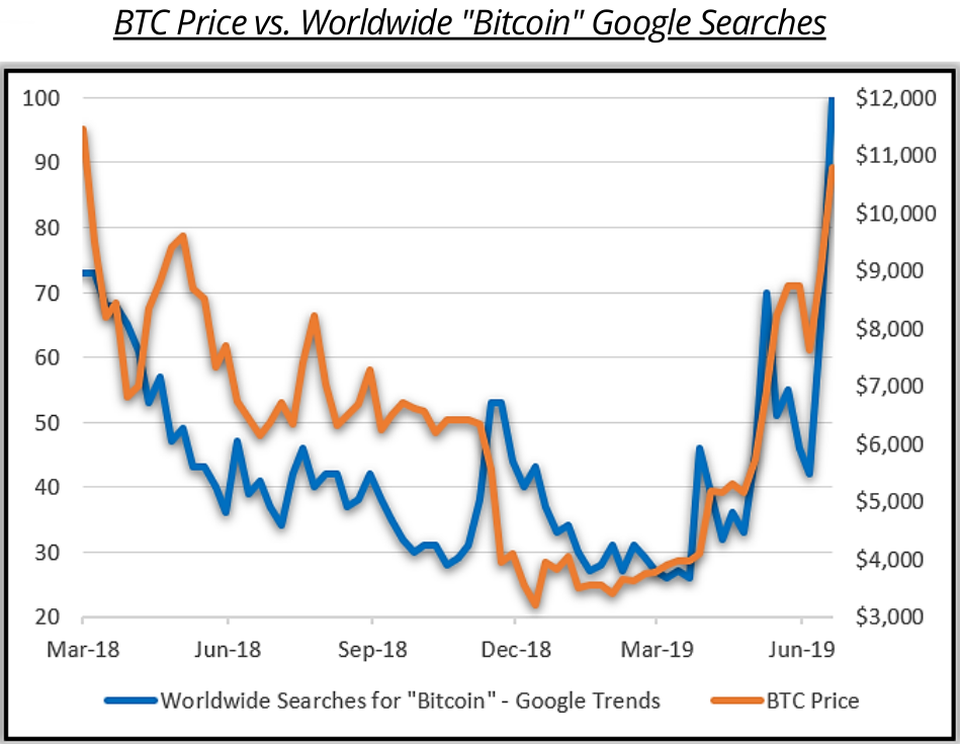 The report provides as examples Google searches for “bitcoin” and a higher premium on Grayscale’s Bitcoin Investment Trust (GBTC) of retail investors’ renewed enthusiasm. It states:

“The recent parabolic price moves have given us an eerie flashback to 2017, albeit sentiment is not nearly as dramatic.” 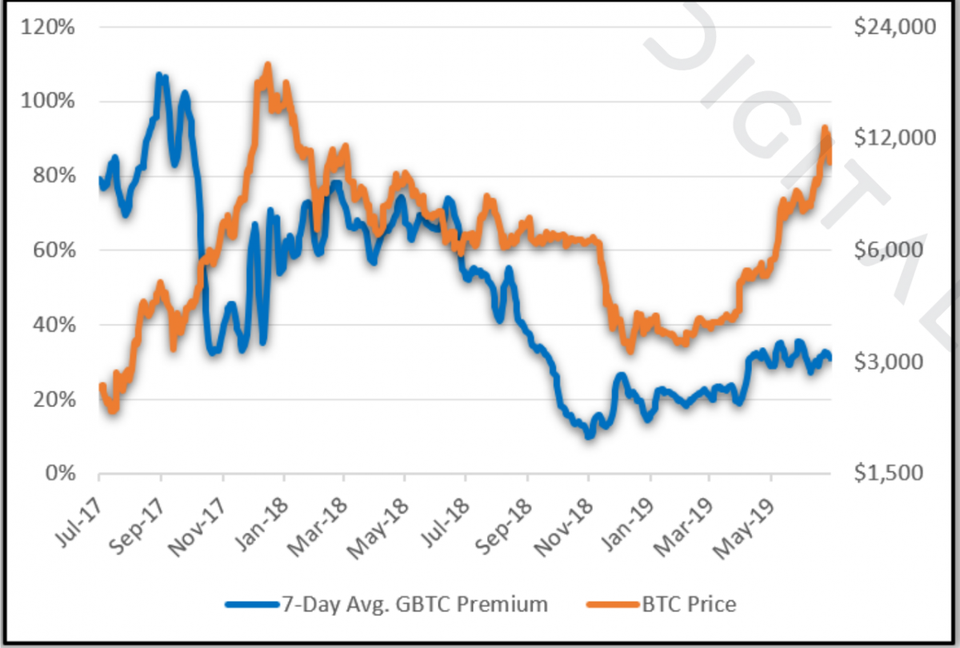 At first glance, it appears that the above reports are unrelated but this is not quite so. As we make our month-by-month analysis of the crypto market, we note giant shifts in sentiment.

Who would have thought a year ago that government authorities such as CFTC, NFA, FED, SEC and Ministries of Finance would be making headlines with crypto? Or that whales like Fidelity and JP Morgan would take a course on the market? Or that Bitcoin futures would start trading on CME, ICE and other large exchanges? Or that J. Powell and S. Mnuchin would be discussing Bitcoin and Libra adoption?

Recent events show that cryptocurrencies have taken a definite direction, shifting from the local/underground scale to the governmental/global scale. What we have is a boiling pot – everything remains contained while the pressure keeps building. At the current scale and size, the market simply cannot accommodate big international funds and institutional investors. But the lid is bound to blow off this boiling pot. Sooner or later, regulators will adopt rules for cryptocurrencies under the pressure of big international funds and companies – that will be the moment of a big breakout, whose first sign should be Bakkt in Q3 of 2019.

On the whole, all this corresponds to our long-term view. While fruit continues to ripen, a retracement is expected. Our view is that the major upside trend will begin as soon as within 6 months.

I
INVESTOR
3 years ago,
Registered user
Thank you very much Sive for all that you do for us...

ED SCHAFFER
3 years ago,
Registered user
I concur with the above comments from "INVESTOR". Just keeping up with all the current developments in the BTC market from disparate sources is enough to make one's head spin. Thank you SIVE for aggregating all these news developments into one space is appreciated by readers like me who operate under severe time limitations. Please do keep up this important work.