The market was quiet in August compared to the June-July period. Investors were waiting with bated breath for breakouts as big projects like Bakkt, Libra, and crypto Hedge funds were close to launching. It seemed as though the tiniest push would be enough to open a new era in crypto. But not yet!

The market has exhaled and remains in standby mode due to the delay of the much-anticipated projects. Bitcoin’s price action mirrors the sentiment – it has stopped growing and shows consolidation in the $10K-$12K area.

Even so, there have been some noteworthy events. As usual, we start with the most significant and positive.

After obtaining a so-called “designated contract market license” (DCM) from the Commodities Futures Trading Commission (CFTC) in June, LedgerX has introduced physically-delivered Bitcoin options and custody for retail investors. According to a statement made by the company, their OMNI platform has soft-launched and is now fully operational, serving both retail and institutional players.

Bitmain Buying 600K Chips That Could Bring $1.2 Billion In Profits

Bitmain Technologies has reportedly placed an order for 600,000 mining chips. The new chips are projected to bring $1.2 billion in profit, putting Bitmain’s valuation at $12 billion, according to a report by a Chinese news outlet.

The mining giant is also planning to go public in the U.S. via an initial public offering (IPO), aiming to raise $300-$500 million. The IPO is expected to launch “as soon as the second half of this year.”

According to Coinbase CEO Brian Armstrong, the exchange’s custody unit has been receiving $200-400 million per week in new cryptocurrency deposits from institutional customers. Armstrong stated that, at present, they have over $7 billion in digital assets under custody and added:

“Trusted/safe infrastructure for institutions is just one small step on the journey to building the [crypto economy].”

Mu Changchun, Deputy Chief in the Payment and Settlement Division of the People’s Bank of China (PBOC), announced at the China Finance 40 Group meeting on August 10 that the “country will soon roll out its central bank digital currency (CBDC.)”

According to Mr. Changchun, the currency has been in the research and development phase since 2014. He said, “People’s Bank digital currency can now be said to be ready.”

New Zealand’s tax authorities have ruled that income in cryptocurrencies is legal and provided guidelines on how it should be taxed. In an information bulletin published on July 4, the New Zealand Inland Revenue Department summarized the provisions of the ruling.

In a first, the British High Court has recognized Bitcoin as “property” in an interim judgment on a cryptocurrency hacking case. Through subject to ratification, the decision sets a legal precedent in the 800-year-old system, making it easier for victims of hacking to claim cryptocurrencies locked away in exchanges.

The governments of approximately 15 countries, including Australia, Singapore, and G7 members, have joined forces to develop a system to fight money laundering in cryptocurrencies. The system, which will collect and share personal data on individuals who conduct crypto transactions, will be managed by the inter-governmental body Financial Action Task Force (FATF). As reported by Nikkei Asian Review:

“The goal is to draw up detailed measures by 2020, and to have the system up and running a few years later.”

U.S. Secretary of State Pompeo says crypto should be regulated like SWIFT and other electronic financial transactions

U.S. Secretary of State Michael Pompeo, one of Donald Trump’s closest advisors, has said that cryptocurrencies, such as bitcoin and Facebook’s upcoming cryptocurrency Libra, should be regulated in the same manner as all other electronic financial transactions.

Pompeo shared his thoughts in an interview with CNBC on Tuesday, saying:

Data protection and privacy authorities in the U.S., U.K., EU, Australia, and Canada have issued a joint statement sharing concerns about Libra. The regulators said that Facebook has “failed to specifically address” privacy concerns in the past and that the project amplifies the concerns as the Libra Network “may instantly become the custodian of millions of people’s personal information,” once it goes live.

Facebook is aware of the difficulties, as evident in their SEC Q2 filing that states in the risk disclosure section:

“There can be no assurance that Libra or our associated products and services will be made available in a timely manner, or at all.”

After fifteen years of service, Robert A. Cohen, the chief of the Cyber Unit at the U.S. Securities and Exchange Commission (SEC), is leaving the agency in August.

Amir Zaidi, director of the Division of Market Oversight (DMO) at the U.S. Commodity Futures Trading Commission (CFTC), is reportedly leaving the agency.

London-based Barclays Bank is no longer working with cryptocurrency exchange Coinbase, industry sources told CoinDesk. And while Coinbase has found a replacement in U.K. upstart ClearBank, the change seems to have indirectly inconvenienced users.

We begin our analysis section with an interesting report by Greyscale Investing. Although it does not make revolutionary statements, we highlight the following:

“Over the last ten years, Bitcoin has emerged from a nascent protocol into an established, legitimate asset with a strong performance record and significant diversification benefits. Already, our survey shows that roughly one-third of individual investors are interested in Bitcoin. A broad cross-section of investors — across ages, genders, and a variety of income levels — are intrigued by Bitcoin’s strong return potential and they’re eager to learn more. Others remain on the sidelines for now, either because they don’t know enough about Bitcoin or because they’re afraid that it’s too risky, lacks regulatory certainty, or is subject to digital crime. But we think even these investors can be swayed by strong, targeted education that goes beyond negative headlines to look at the real potential of this investment. Our survey respondents tell us that the future of investing is digital, and they want to be part of it. Bitcoin is here to stay.”

In the following interview given to Fox Business Network, Fundstrat Global Advisors co-founder Tom Lee discussed how Bitcoin is affected by the Federal Reserve’s interest rate cuts, the market selloff, the decline of the U.S. dollar. 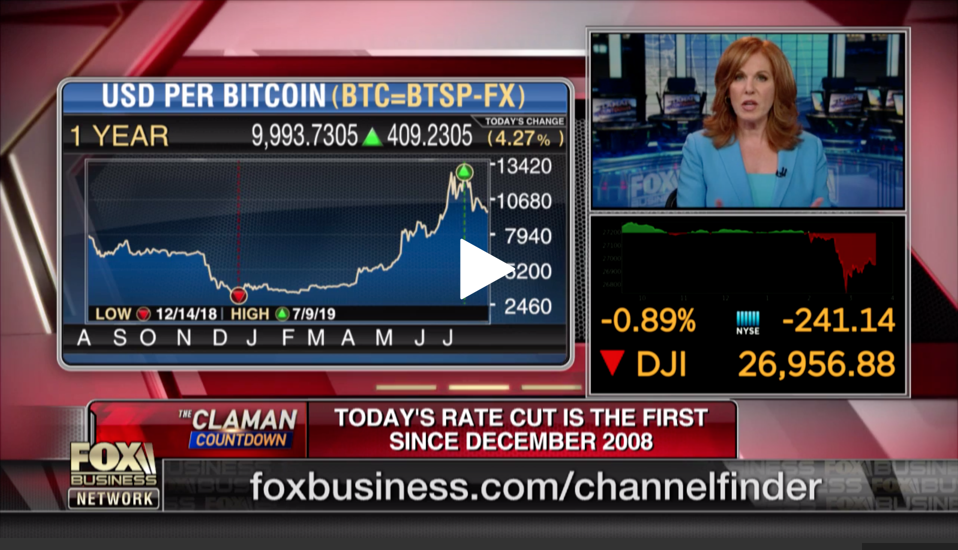 “There are significant shifts taking place in monetary, fiscal, and trade policies around the world that will likely impact global markets well into the future. While we don’t know when or at what levels the current drawdown will end, it is clear that the challenges faced by politicians and policymakers will be difficult to manage, given the complexity of our global financial system. Bitcoin could be a useful tool in helping investors insulate their portfolios from any failure to manage these problems effectively.” 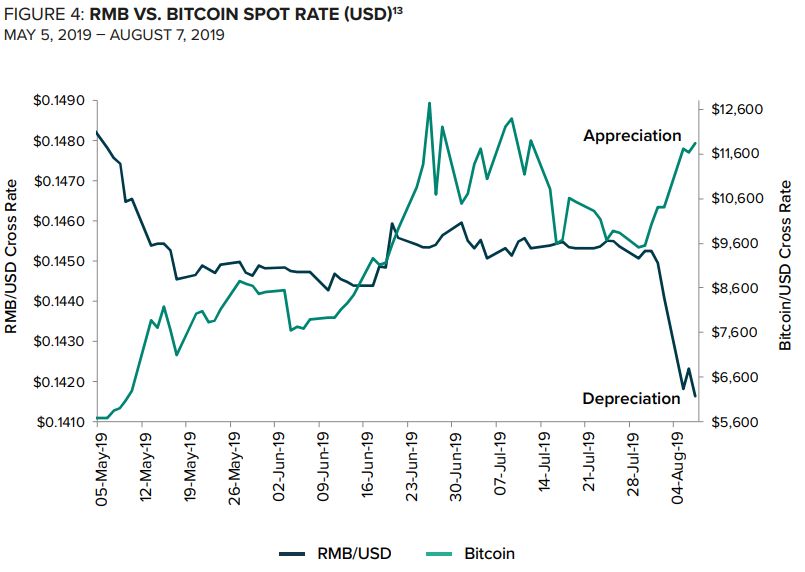 An article published on Forbes.com on August 22 states that,

“Researchers found that – if Bitcoin’s dominance is adjusted for liquidity by calculating the volume-weighted market capitalization – it soars to over 90%, reducing the rest of the cryptocurrency market, including major tokens Ethereum, Ripple’s XRP and Litecoin, to a combined less than 10%—and making their ultimate success more unlikely.”

The article then makes reference to research by Arcane Research that shows how the real market dominance of Bitcoin is higher than what is traditionally reported. According to Bendik Norheim Schei, who carried out the study:

“Every day Bitcoin stays ahead, it becomes less likely that any other cryptocurrency can compete as money. […] That is important to understand not only for investors and those building out payment infrastructure, but also those building out solutions leveraging the security of a public blockchain.”

At present, Bitcoin has a market capitalization of $180 billion, compared to Ethereum’s $20 billion, Litecoin’s $4.5 billion, and $11 billion for Ripple’s XRP. 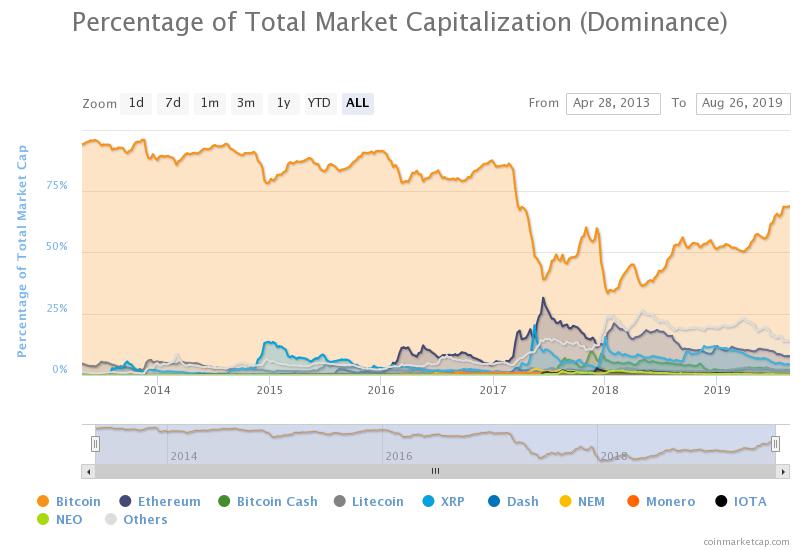 August’s events have not impacted the Bitcoin market, which remains in standby mode in the $10K-$12K area. The lengthy process of integrating crypto into the modern economic environment continues. Nevertheless, a significant influx of money and increasing mining power indicate that there is still a positive mood. All the market needs is a push from a significant external factor, which we believe is likely to be Bakkt.

Positive developments this month include growing interest in Bitcoin from central banks, and courts deeming it as “property” – this is a big step forward in the legal acknowledgment of cryptocurrencies.  Negative developments include increasing control from governments across the globe.

Although this may not be obvious, a degree of control will shape the crypto market of the future – the great uncertainty and risk is the degree of control. While governments cannot control or expropriate cryptocurrencies per se, they could control their flow and transactions by regulating crypto exchanges, transfer nodes, and mining servers. Also, they may try to replace them with their own altcoins. In the longer-term, this could have a direct impact on Bitcoin’s features, and on demand and liquidity as a result.