The Bitcoin market was surprisingly quiet in the first two months of 2020. While other markets, especially gold, are feeling the effects of the coronavirus panic, cryptocurrencies are maintaining a tight trading range and a medium-term bullish sentiment.

The general backdrop has not changed much since December, but there is no way of knowing what the effects of the epidemic may be with 50% mining power in China. With that said, it’s unlikely that operations would have to be suspended since crypto mining differs from traditional industries that depend on workforce.

While we wait to see how the crypto market is impacted, let’s take a look at the news:

Banks want to get into the crypto business

The financial regulator Bafin has received more than 40 expressions of interest from banks for permission to offer crypto custody services in the future. The new Money Laundering Act allows banks to offer and keep products other than traditional securities like stocks and bonds. Since the beginning of the year, banks have been able to offer their customers online banking for cryptocurrencies like Bitcoin, Ethereum, and Ripple.

“There is no evidence of a widespread or general move to expand this research into experimentation and pilot arrangements.”

Under Peirce’s proposal, unveiled during a speech at the International Blockchain Congress in Chicago Thursday,

crypto startups would have a three-year grace period from their first token sale to achieve a level of decentralization sufficient to pass the agency’s securities evaluations, including the Howey Test. According to Peirce:

“The safe harbor is also designed to protect token purchasers by requiring disclosures tailored to the needs of the purchasers and preserve the application of the anti-fraud provisions of the federal securities laws.”

Fidelity International purchased 17 million shares of BC Group (owner of the Hong Kong crypto exchange OSL) at the price of US$0.83 per share, raising its stake in the company to 5.6%. BC Group CEO Hugh Madden said in a statement:

“We’re excited to see that world-class equity investors are increasingly participating in the fast-growing digital asset sector, and we look forward to reaching new milestones with our industry-leading institutional investors.”

Following the success of Coinbase Card, Coinbase is the first company in the crypto ecosystem to be granted Visa principal membership. The membership enables them to offer more features to Coinbase Card customers, such as additional services and support in more markets. All these elements will evolve and enrich the cryptocurrency payment experience.

The Riksbank to test technical solution for the e-krona

Riksbank and Accenture are conducting a pilot project to develop a technical solution for an e-krona, which can be used by the public as a complement to cash. The objective is to create a digital krona that is simple, user-friendly, while meeting security and performance requirements. In the test environment, users will hold e-krona in a digital wallet, and make payments, deposits, and withdrawals via a mobile app.

Banking giant Wells Fargo invested $5 million in the blockchain forensics firm Elliptic. The investment is partly geared toward a new product, Elliptic Discover, which provides a “bill of health” for over 200 crypto exchanges worldwide, covering everything from how they conduct know-your-customer (KYC) checks to whether they’re regulated in the first place. It also helps banks connect with exchanges. Elliptic co-founder Tom Robinson told CoinDesk:

“Previously, a bank just didn’t know much about the exchange that was wanting to open an account with them. This will give them insights into how risky or otherwise a given crypto exchange is. Elliptic Discovery really does help a bank to engage more closely with crypto exchanges.”

Federal Reserve chairman Jerome Powell spoke before the House of Representatives Committee on Financial Services. When questioned about the central bank’s digital currencies  (CNBC) efforts and Libra, he said:

“We’re working hard on it; we have a lot of projects going on, lot of efforts […] on that right now. […] It was a bit of a wakeup call that this is coming fast, and could come in a way that is quite, you know, widespread and systemically important fairly quickly if you use one of these big tech networks like Libra did.”

Powell stressed that the Fed has not officially embarked on the creation or launch of a digital dollar.

Grayscale Bitcoin Trust (GBTC), a closed-end fund that gives investors exposure to Bitcoin through a traditional investment vehicle, currently has $2.79 billion of assets under management, approximately 285,000 Bitcoins. The total share of Bitcoin held in GBTC is at the all-time high of 1.57%. In the last four years, Grayscale has collected more than $80 million in fees from GBTC. In aggregate, there was $64 million of inflows in 2017, $220 million in 2018, and $438 million in 2019.

Police Shuts Down Bitcoin Mine Over Coronavirus

A big Bitcoin mine was shut down in China in an attempt to contain the Coronavirus outbreak.  Jiang Zhuoer, founder of BTC.Top, reacted to the forced shutdown with the following statement:

“The mine is in a remote suburb. Maintenance personnel have lived in the mine since the Spring Festival, and there have been no new arrivals. It is understandable to take a regular temperature measurement, roll call, and prohibit going out, but what are the benefits of stopping mining machinery for epidemic prevention?”

Indeed! We posed the same question at the beginning of the article – this is the first worrisome sign that shutdowns may increase due to the infection.

Aleksi Grym – CBDC would be nothing new to banks

Special Consultant for the Bank of Finland, Aleksi Grym, writes that CBDC (central bank digital currency) is essentially useless since it brings no new features to commercial and central banks:

“All forms of non-cash money can be called digital. Digital money is simply an ownership record of money. When you are in possession of digital money, it means instead of holding physical currency, someone keeps record of how much of it you are entitled to. It makes no difference how such records are kept. Any record-keeping device will do, whether it’s a tally stick, a piece of paper, a spreadsheet, or a blockchain running on a peer-to-peer network. […] Since commercial banks already have accounts at the central bank, and all those records are digital from the outset; CBDC would be nothing new to banks.”

Following a request by the New York Southern District Court, a division at the Commodity Futures Trading Commission filed a letter expressing its views on the complicated case involving Telegram’s digital currency Gram. According to the letter, the CFTC’s stance on the case is “relatively straightforward” and stipulates that a “digital currency is a commodity.” Submitted by the CFTC’s Office of General Counsel, the letter represents the views of the division, not necessarily of the CFTC or any individual Commissioner.

In the document, the CFTC states that Telegram itself argues that Gram should be a considered a commodity instead of a security:

“We understand that the defendant, Telegram Group, Inc., argues that its planned digital currency, the ‘Gram,’ will be a commodity and not a security, and therefore not subject to registration under the Securities Act of 1933 (“’33 Act”).”

On February 21, the daily trade volume for Chicago Mercantile Exchange’s Bitcoin futures reached a new low for 2020, with $118 million worth of contracts changing hands. The record low came three days after CME’s daily volume exceeded $1 billion for the third time in the market’s history, with CME Bitcoin futures producing over 23,000 contracts or $1.1 billion worth of trade. 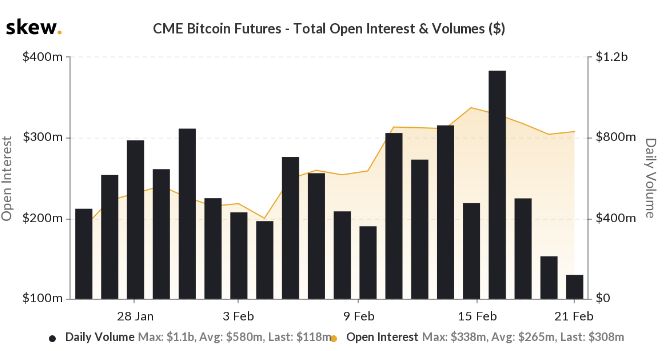 Founded in 2018, Galaxy has yet to turn a profit consistently. Its net loss for the third quarter of 2019 fell to $68 million from $77 million one year earlier, according to a securities filing.

5 mining entities controlled 49.9% of the hashrate of the bitcoin network. 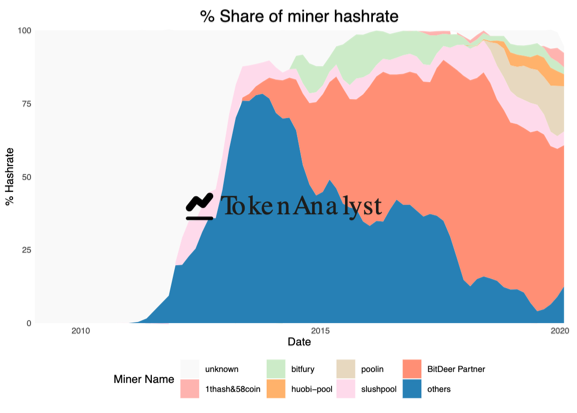 The mining pools available through the BitDeer platform collectively control approximately 50% of the Bitcoin network’s hashrate. Computer power-sharing platforms like BitDeer have reduced the barrier to entry for the average consumer interested in mining – this is a good thing. However, any centralization of hash power should be of concern since it erodes the network’s trustless model. Consumers should be aware of the competition between mining entities to ensure that no one controls too great a portion of the network’s hashrate. However, this is difficult when you don’t know what an entity consists of any more.

Expansion and regulation continue to drive the market at the start of the new year.

Central banks are still considering CBDC, while hedge funds and commercial banks carefully test the waters, investing in companies that relate to digital money. At the same time, the CFTC and SEC continue working on regulation. Statistics indicate a growing trading volume of cryptocurrencies. Hedge funds, such as GreyScale, are increasing their assets. While all these are good long-term signs, now we are faced with a threat of a different sort.

As curious as it sounds, the risk is the coronavirus epidemic, which can be used as an excuse by governments to restrict the sector, especially in China. In fact, in February, we saw the first attempt to do so.

With more than 50% of mining pools located in China, increased negative attention from authorities might shake market confidence. Strictly from the technical perspective, however, mining companies closing should not have a negative effect since miners elsewhere will only be pleased.

Another negative factor is the demand for safe-haven assets because, at this time, the return of the investments takes precedence over the return on investments. This may hinder the expansion of the crypto market, which is waiting for infusions from financial institutions. Since these financial entities have just started looking at cryptocurrencies, any crisis could halt their activity until a more risk-friendly environment develops. This poses a significant risk for the crypto market.

Let’s hope that the epidemic will be relatively short-term and not lead to a global recession. If the virus impacts the U.S. and Europe as much as China, we cannot rule out a sharp drop of BTC to the catastrophic level of $1.8-2K.

Brett Reynolds
4 months ago,
Registered user
Hi Sive, It seems Blockchain summit 'Already have Advert Banner' on FPA site.!
I have been meaning to attend one of these summit for last 3 yrs.!