This month is becoming a turning point for Bitcoin. The price is showing 3X the growth to 9K level, and everybody is asking the same question, “Is this a new long-term bull trend or not yet?”

Technically, we are seeing signs of a reversal – and this is something that we highlight in our videos on the Bitcoin market almost every day. Bitcoin formed a bullish reversal swing on a weekly chart, indicating that upside action has a good chance of continuing long-term. Also, in last month’s article, we mentioned an interesting report from Adamant Capital. Using a wide range of forecasting tools, they concluded that the bear trend is over and that the market is in a period of “accumulation” with a relative balance between sellers and buyers. As the rest of the sell offers become absorbed, Bitcoin should move higher – this is what has happened this month.

Don’t be upset if you’ve missed a rally. To be honest, I almost always miss or skip the initial upswing and take a position on the retracement. Not only is this safer, but it also helps confirm the rally’s reliability. This is the situation with Bitcoin at the moment. When the initial upswing is over, we should see a meaningful retracement, 30% at least.

Our first report is about ICE Exchange and its Bakkt project. We have kept an eye on this throughout the year, and now it seems close to launching. According to their blog:

“Today, we’re pleased to update you on the launch of Bitcoin futures contracts developed by Bakkt in collaboration with ICE Futures US and ICE Clear US. We’ve worked closely with the CFTC to develop contracts that both meet our customers’ needs for trading, transparency, and market certainty, and are also compliant with Federal regulations.

In conjunction with our exchange and clearing partners at ICE, we’ll be working with our customers over the next several weeks to prepare for user acceptance testing (UAT) for futures and custody, which we expect to start in July. We’ll provide more details in upcoming posts, but we expect to use UAT to ensure that customers have time to onboard and can test the trading and custody model we’ve built to their satisfaction.”

If you want to learn more, this article on Medium.com provides the trading parameters of Bitcoin futures contract on ICE.

Canaccord Genuity provides its own fundamental research on Bitcoin

In its industry update, Canaccord Genuity Corp lists the different types of analysis and indicators that paint a broad view of the ongoing processes of the cryptomarket, like pattern recognition, mining, transaction value, and other factors. They write:

“The number of confirmed transactions per day has continued to increase in May to an average of 387K/day-to-date, up from 366K/day in April. Recall that recent lows were set in March of 2018 when Bitcoin averaged 185K transactions/day.

The daily number of unique addresses used on the Bitcoin blockchain, which is the key input to our Metcalfe’s Law analysis, has increased to an average of 508K addresses so far in May, up from 497K addresses in April. The average number of addresses has now increased for five consecutive months.”

“There are a few possible recent catalysts for Bitcoin’s recovery. Perhaps most important is Fidelity’s continued push into space. After the asset management giant launched Fidelity Digital Assets last October and custody service in March, numerous reports suggest the launch of an institutional digital assets trading business within the next few weeks. Fidelity also released a survey of 411 US institutional investors which found that 40% are open to owning digital assets within the next five years. Another factor may be Grayscale’s ‘Drop Gold’ advertising campaign, which hit airwaves recently and targets a digitally native investor base that may prefer Bitcoin to gold as a non-government store of value investment. Yet another could be several corporate crypto initiatives from the likes of Facebook, Nike, and others gaining attention in the media. In any event, Bitcoin is so far one of the best-performing assets of 2019.”

On May 12, Andy Hao of Longhash.com reported the following:

“According to information presented on Messari.io’s OnChainFX rankings, Bitcoin accounted for nearly USD 580,000 in fees in the last 24 hours. On May 10, 2019, at 9:50 am UTC, Bitcoin miners earned more than eight times the transaction fees than the combined total of all other cryptocurrencies listed on the site.

These figures illustrate a significant gap when it comes to the amount of fees that the miners of popular cryptocurrencies are earning each day. While many proponents will likely cite this as a win for altcoin users, who are theoretically left with less fees to pay when sending transactions, Bitcoin’s daily fees are an example of the currency functioning as its creator(s) intended.”

Fees for transaction priority have become an almost equal source of income to the block creation reward. As we know, the reward is expected to drop from 12.5BTC to 6.25 BTC soon. Now, miners are starting to actively use their power to process transactions since this brings in good earnings. We agree with Canaccord that this means that the transaction amount is high enough to feed miners and compete for the reward.

Although this reports is about a different cryptocurrency, it is an indication of government regulation and a positive sign for the whole market. A senior official told CoinDesk:

“The U.S. Commodity Futures Trading Commission (CFTC) is willing to approve an ether futures contract – provided it ticks all the right boxes. […] The CFTC, which oversees derivatives markets in the U.S., has already allowed Bitcoin futures markets to launch, with both CME Group and Cboe Global Exchange offering cash-settled contracts at the end of 2017.

Now, the regulator is willing to oversee a similar product for Ether. Currently, the world’s second-largest cryptocurrency by market cap.  I think we can get comfortable with an Ether derivative being under our jurisdiction. We don’t do bold pronouncements, what we do is we look at applications before us.

A derivatives exchange comes to us and says, “we want to launch this particular product.’ … If they came to us with a particular derivative that met our requirements, I think that there’s a good chance that it would be [allowed to be] self-certified by us.”

The sentiment of the market is starting to change. According to a report published by CoinRebiet.com on May 16:

“A 10,500 BTC short position was closed on the Bitfinex exchange on Thursday as Bitcoin experienced a flash sell-off from its $8,300 top. […] Long/short dynamics on the major exchange dropped from 52% short to under 40% in a matter of minutes.

The 12% change in the long/short ratio can be seen as a bullish switch in sentiment as the total number of margin shorts has fallen from an early May high of 32,000 BTC to its current level of just under 17,000. The $130 million in total margin short interest is trading in the BTC/USDT market, which has a verified volume of close to $200 million of trading action every day.”

Institutional demand for Bitcoin appears to be increasing

The following report comes from Genesis, which attempts to investigate the most important question for the market, institutional investors’ interest. Published on TheBlockCrypro.com, the following is Larry Cermark’s “Quick take”:

The data is showing an uptick in institutional demand.

GBTC gives investors an opportunity to get exposure to Bitcoin through a traditional investment vehicle with shares titled in the investors’ name. Xapo holds Bitcoin in cold storage vaults on behalf of Grayscale, which then charges an expense ratio of 2% that diminishes the value of the fund over time.

The following chart shows GBTC’s assets under management (AUM), in this case, the value of all the Bitcoins held in the fund since May 2017. 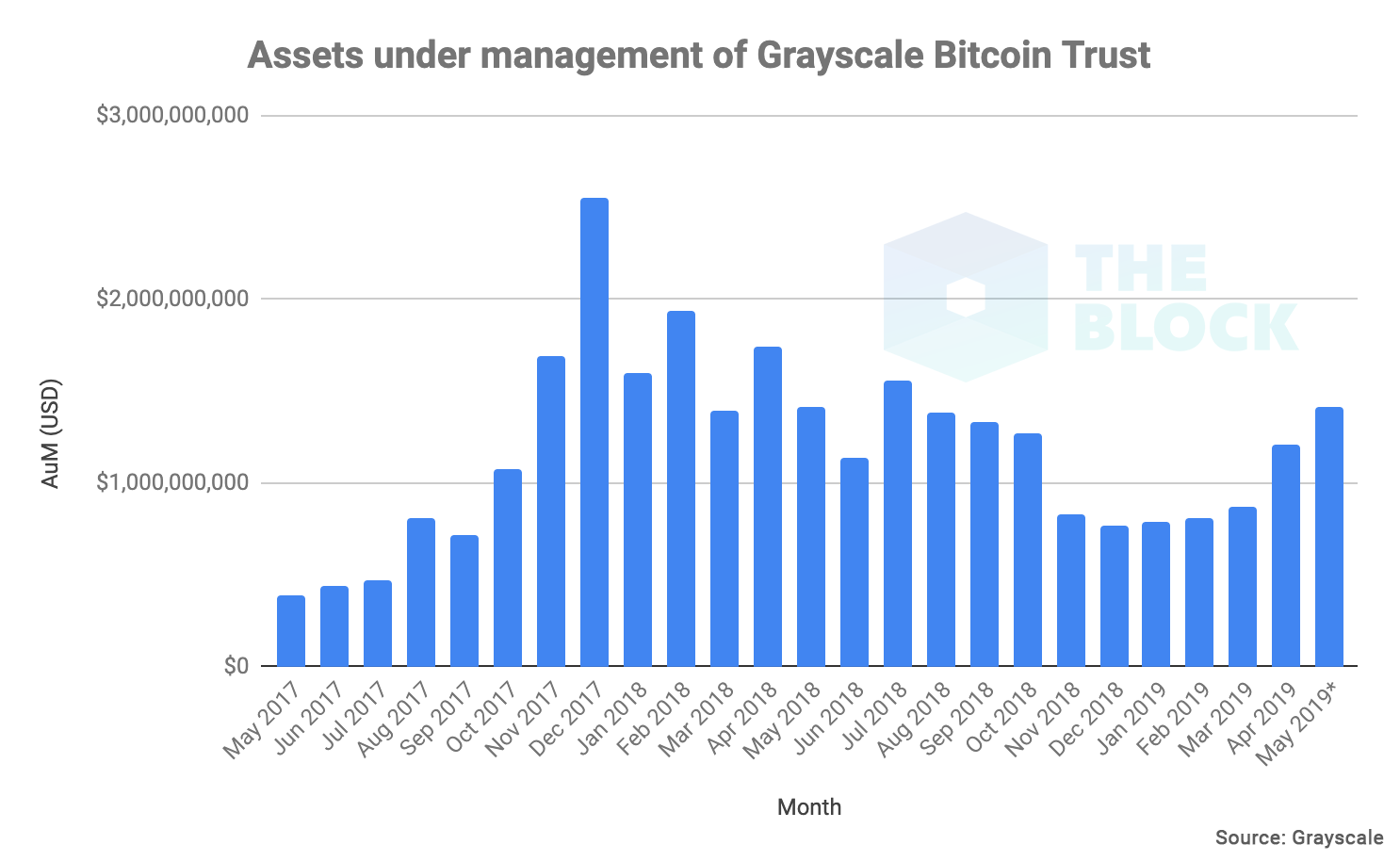 As you can see in the next chart, Grayscale’s Bitcoin Trust holdings reached an all-time high in April 2019. 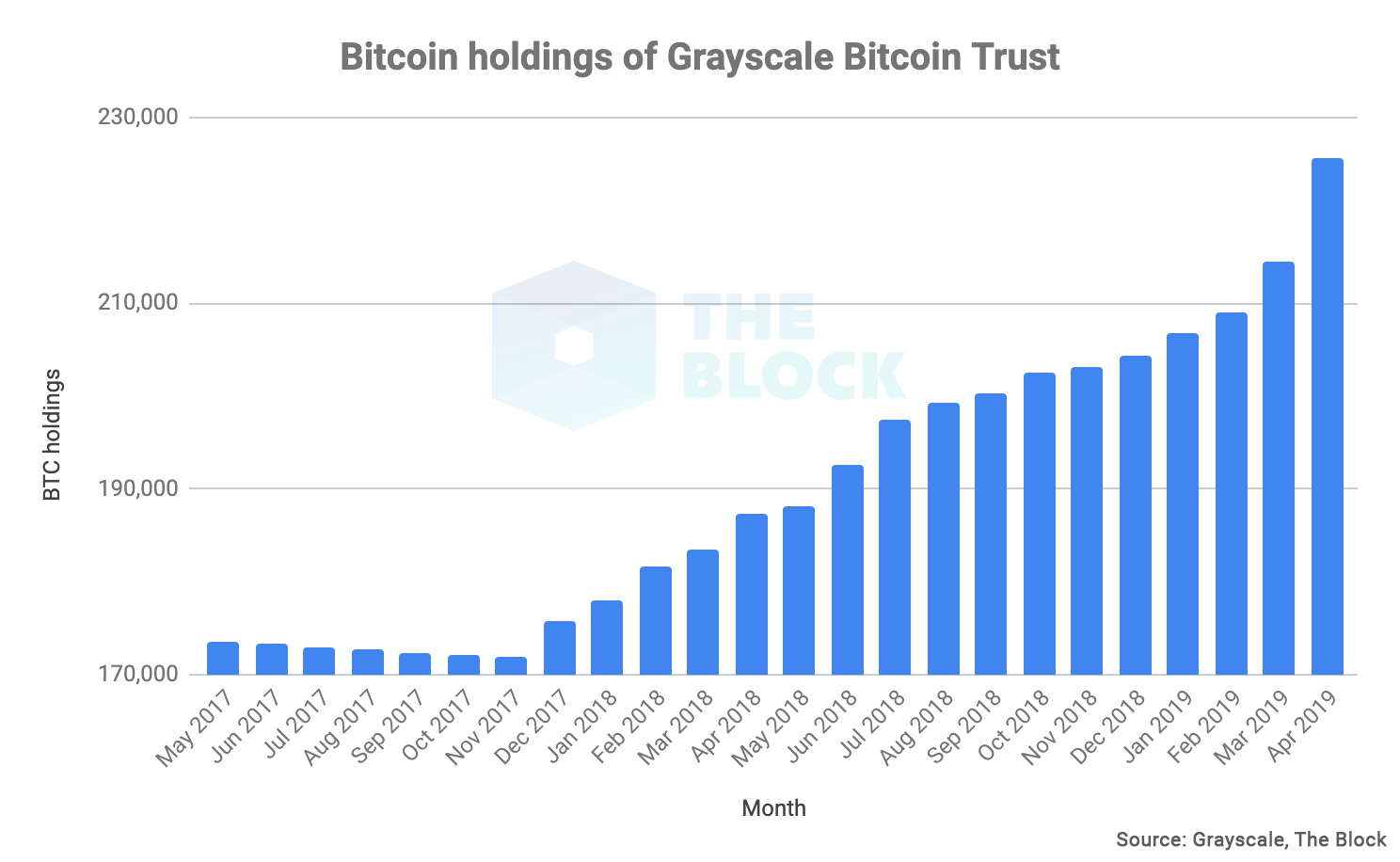 As ComputerWorld.com reported, while not directly accepting cryptocurrency, AT&T is the first major U.S. mobile carrier to let customers pay in Bitcoin through a third-party service provider. Customers using its online bill pay service or the myAT&T app will be able to choose BitPay. The customer pays in Bitcoin and BitPay verifies the funds and accepts the Bitcoin on behalf of the business.

The recent shifts in the market have not gone unnoticed. The rally prompted a wave opinions and forecasts from traders, many of whom hold the same view as we do – that Bitcoin retracement is around the corner and will be a “best buy” opportunity. Let’s look at a few of these opinions more closely:

This month, the SEC postponed the registration of SolidX Management LLC Bitcoin ETF again, and there were technical problems on Binance. Nevertheless, these events received almost no attention and did not create adverse reactions. What does this mean? When markets ignore or underreact to negative news and overreact to positive ones, this is a sign of a bull market.

May seems to be a turning point for the crypto market – we see many positive shifts from different spheres of the Bitcoin space, meaning fundamental data, statistics, sentiment, and technical analysis.

We cite Canaccord Genuity’s pattern comparison of the 2011-2015 rally with what is happening at the moment:

“With Bitcoin up over 90% from lows reached last December, renewed interest from all quarters abounds. As we think about what may lie ahead, for the third time, we note that Bitcoin’s price action from 2011-2015 continues to provide a reasonably good roadmap for 2015-2019. This framework suggests a long-term recovery beginning in the April-May time frame (right about now), followed by a very slow climb back to old highs in March of 2021. A close look at the chart suggests that the current recovery may be slightly ahead of itself at the moment. As always, we caveat this observation with the obvious – this is simply pattern recognition and not reliable fundamental analysis.”

In closing, we will say that we want to believe that this will be not “simply the pattern,” right?

Brett Reynolds
7 months ago,
Registered user
Indeed Sive. The future of 'Money' is NOT Money...but value'..!! Value brought by Human Beings. to the welfare and overall good of their community, country and Planet Earth. Crypto will become 'credit'...! A credit...accumulated to individuals for their roles, work and effort. The amount of 'credits' will be decided by 'community councils'. and local governments. so certain people can receive more credit than others depending on their 'skills, knowledge and time devoted to working.