Instead of an Intro

This month Bitcoin has been quiet, too quiet – more than we have seen in a very long time. And this “silence” is causing concern in the market. Sometimes, this can lead to various forecasts and expectations.

Meanwhile, the correlation between Bitcoin and the S&P 500 has increased significantly. According to market consensus, this is not a good sign. Other technical indicators have also changed, like spot market trading volume, derivative market activity, etc.

While the general backdrop is moderately positive, as we estimated last month, the technical nuances differ. We dedicate this report to these nuances because they may become important in shaping the market’s short-term direction. We also hope that they will help us catch the course of the market more or less.

We start with a monthly chart that indicates why the overall situation is rather tricky – two bearish grabbers side-by-side. Until the market stands below the top, the risk of collapse remains. We can’t relax – the situation keeps the market in tension. This is the curtain-raiser to our report…

Why Are Investors Worried?

The following four factors contribute to a nervous BTC market:

1. Extremely low volatility. According to an Arcane Research report,

“The 7-day volatility just dropped down to levels not seen since October 2018. Back then, BTC’s price crashed down to 50% (from $6,000 to $3,000) when the volatility came back. Which direction will the price move this time?”

We should mention that Skew also reports that Bitcoin’s ten-day realized volatility was 20%. Last time it reached that level, the great sell-off of November 2018 followed shortly after. 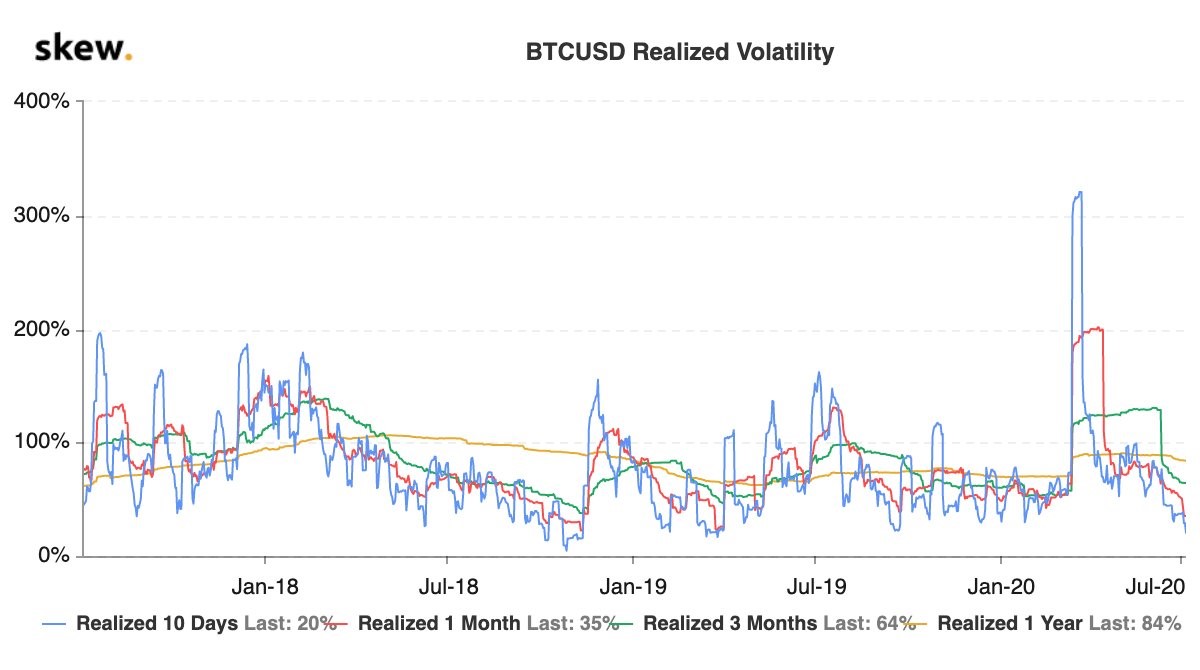 2. Dramatic narrowing in the trading range. With only 11 days left in July, we are seeing the tightest monthly price range (currently 6%) in Bitcoin’s history! The all-time low was seen in May 2015, at 9%. 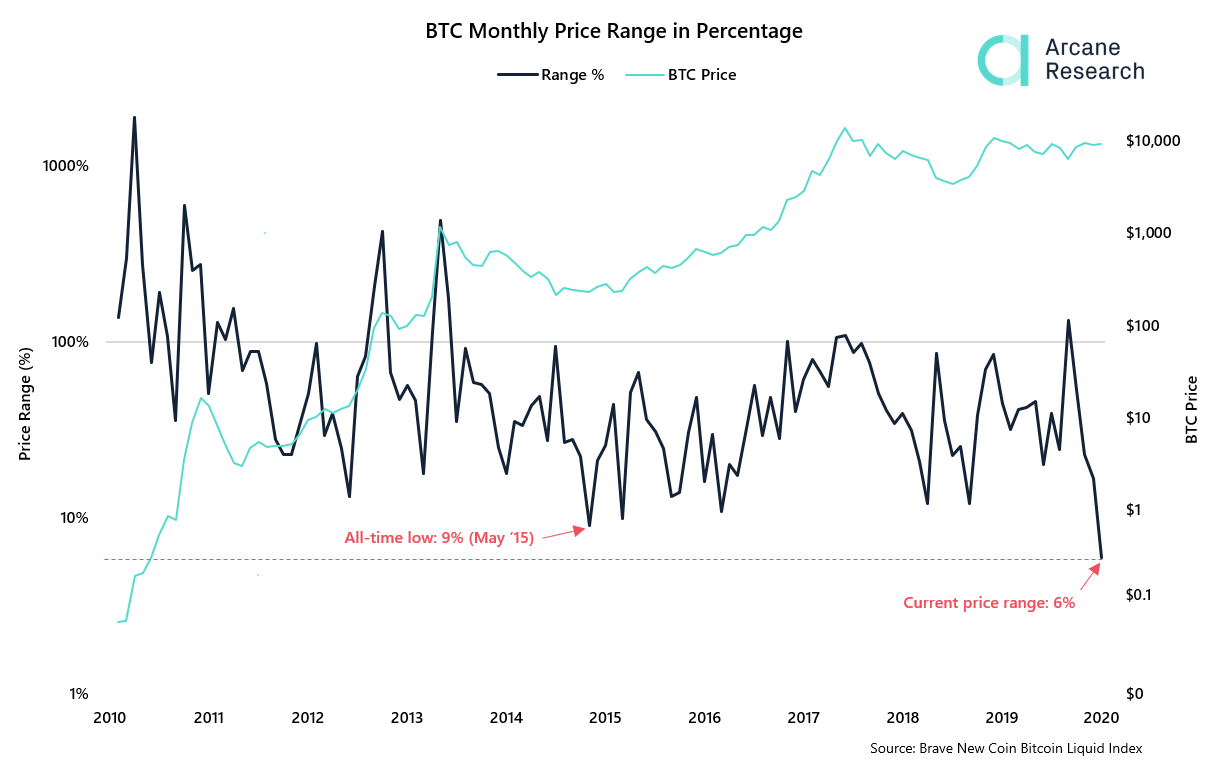 3. In periods of “difficulty” and indecision, the correlation between Bitcoin and the major stock indexes (DAX 30, S&P500) rises. Often, this is accompanied by VIX index jumps. As the “panic index” gradually returns to normal levels, we see a rising divergence of BTC and DAX30 action. 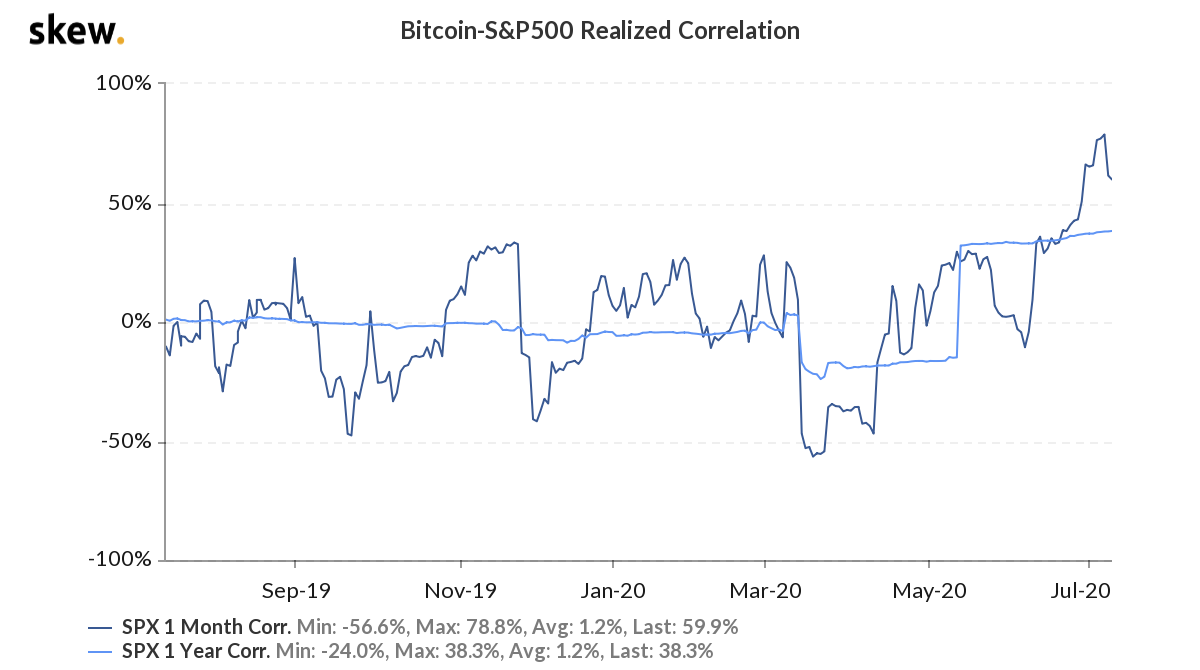 Meanwhile, the opposite relationship is growing not only with stocks but also gold. 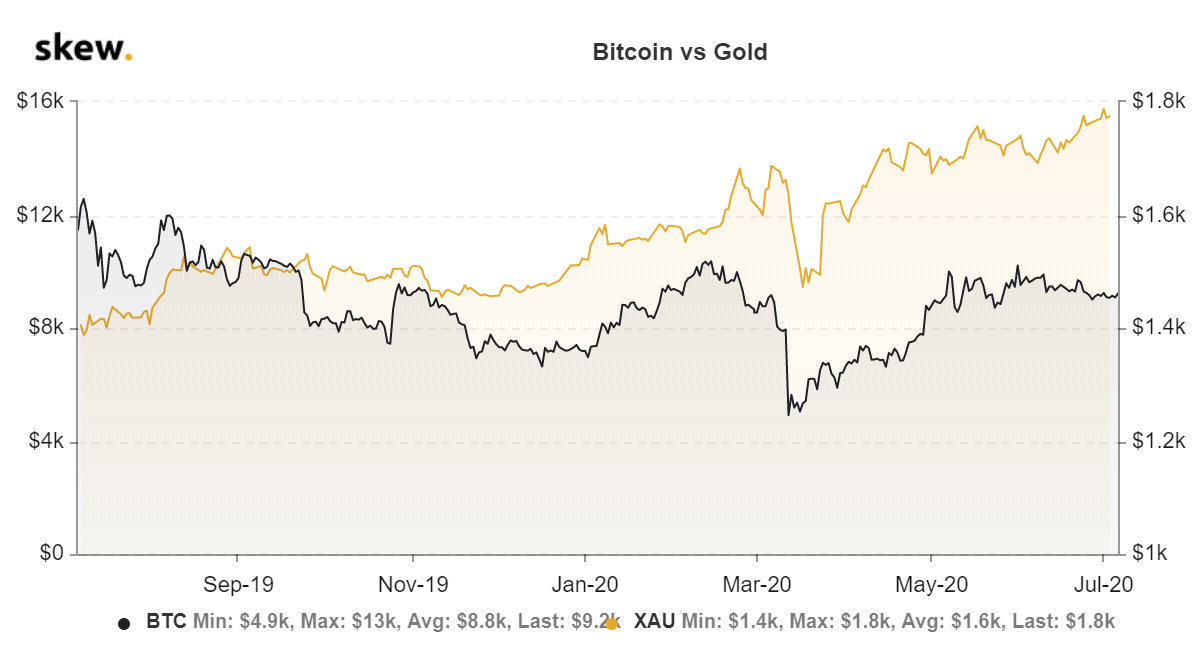 Based on the above factors , Phi Deltalitics  warns of a possible drop in the BTC market due to a contraction of the net long position on CME futures:

“CME institutional traders’ net position remains similar to the level in mid-February 2020, and it has been dropping significantly. Be careful on the short-term bull side!”

The money flow index has also dropped below 30 (the range is 0-100) – this points to a significant outflow of investors’ money. Last time this happened was in February 2020, when BTC dropped 40%:

Unfolded posted the following chart on Twitter, stating that CFTC reports that the net short position reached 2046 K contracts, a level very close to the value of the recent drop to 4K: 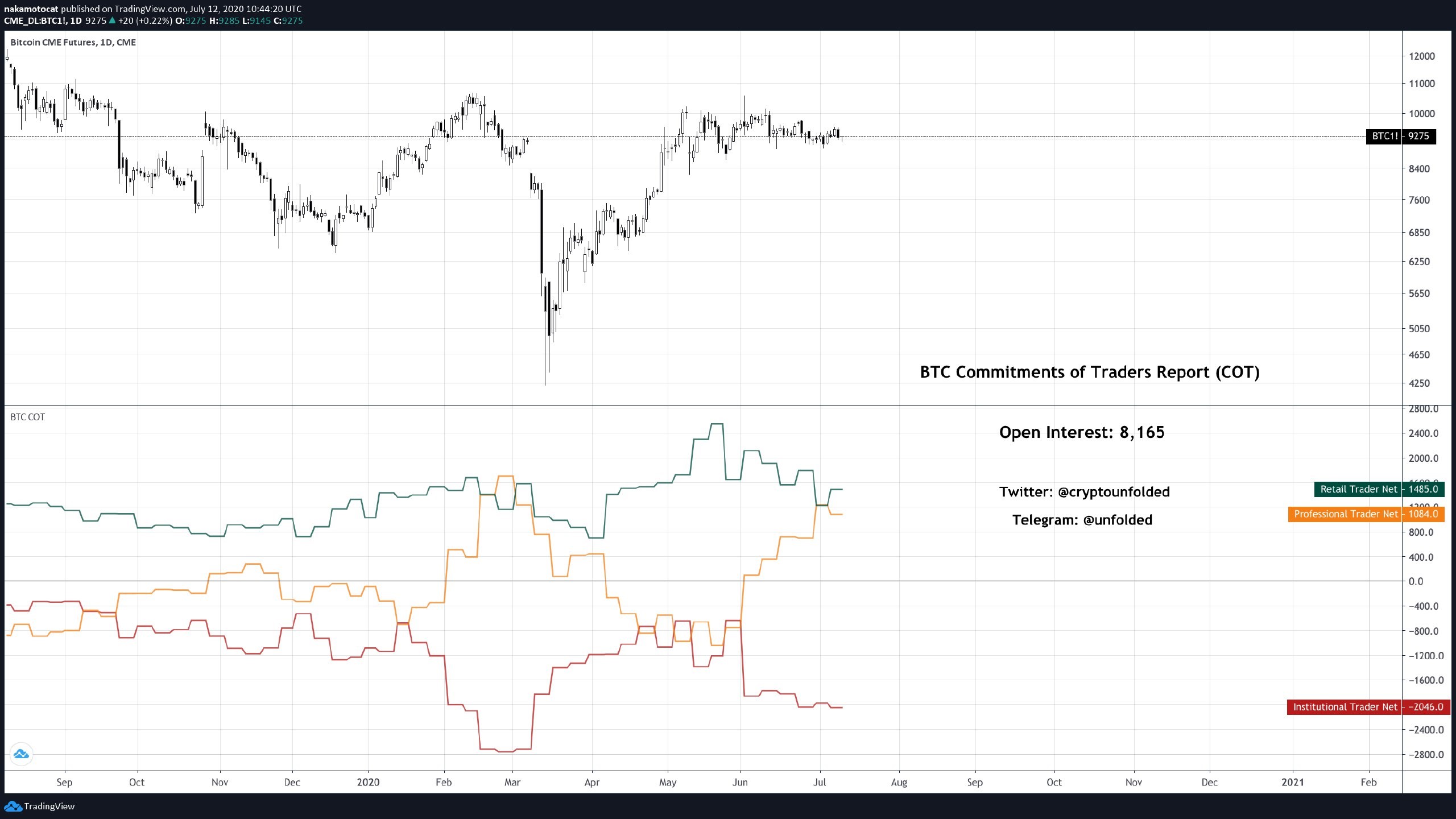 All the above indicates that we should be careful at least when considering Bitcoin purchases for the medium- and long-term.

In June’s report, we discussed forecasts from very respectable authorities, like Bloomberg Analytics and JP Morgan. Bloomberg provided a longer-term fundamental outlook that was positive in general and suggested growth to the 20K area in the long-term due to slowing mining and growing demand for coins. JP Morgan’s report focused on the fair value of BTC, which approximately equals market value at present.

In this month’s report, we can more or less confirm the conclusions of Bloomberg and JP Morgan.

SEBA Switzerland bank introduces math model for estimation of fair BTC value.According to this model, Bitcoin is slightly undervalued at the moment, since the estimated fair price stands around $10,670. The following chart shows the dynamic between BTC’s calculated and real price: 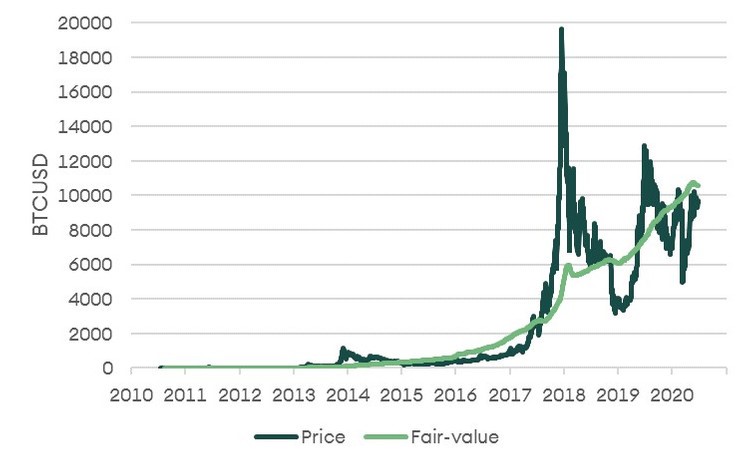 Weiss Crypto provides a longer-term valuation and points that Bitcoin could reach $ 70,000 level, based on stock-to-flow analysis (S2F).

“Stock-to-flow analysis (S2F) focuses on the broad shape of future prices. Although based on a different methodology than the one used by the Weiss Cryptocurrency cycles model, it is widely respected in the crypto world. And it now points to a ferocious rally over the next 12 months or so. S2F is based on the common-sense notion that the scarcer a commodity is, the more valuable it becomes. And it measures scarcity by comparing annual production to the amount available for buying and selling (circulating supply).

Gold has an S2F of 62 — the number of years of current production required to match global above-ground holdings.

By contrast, it takes only 22 years of current silver production to equal above-ground supplies. The relative lesser scarcity of silver is a key factor that makes silver less valuable than gold.

After the May 2020 halving, 6.25 new Bitcoin are now being created every 10 minutes. That means it would take an estimated 56 years for new mintage to match Bitcoin’s circulating supply.

Notice how close that is to the S2F number for gold, which makes sense because Bitcoin is fast becoming a major rival to gold as a safe-haven investment.

(Halving refers to the 50% cut in the rate at which new Bitcoins are created. This occurs roughly everyfour years. And historically, it has been a harbinger of explosive price gains over the next 12 to 18 months.)

As you can see from the chart below, previous S2F predictions line up quite well with Bitcoin’s actual price performance. Now, based on the history of the halving, current S2F analysis says Bitcoin should reach $70,000 by — sometime around mid-2021.” 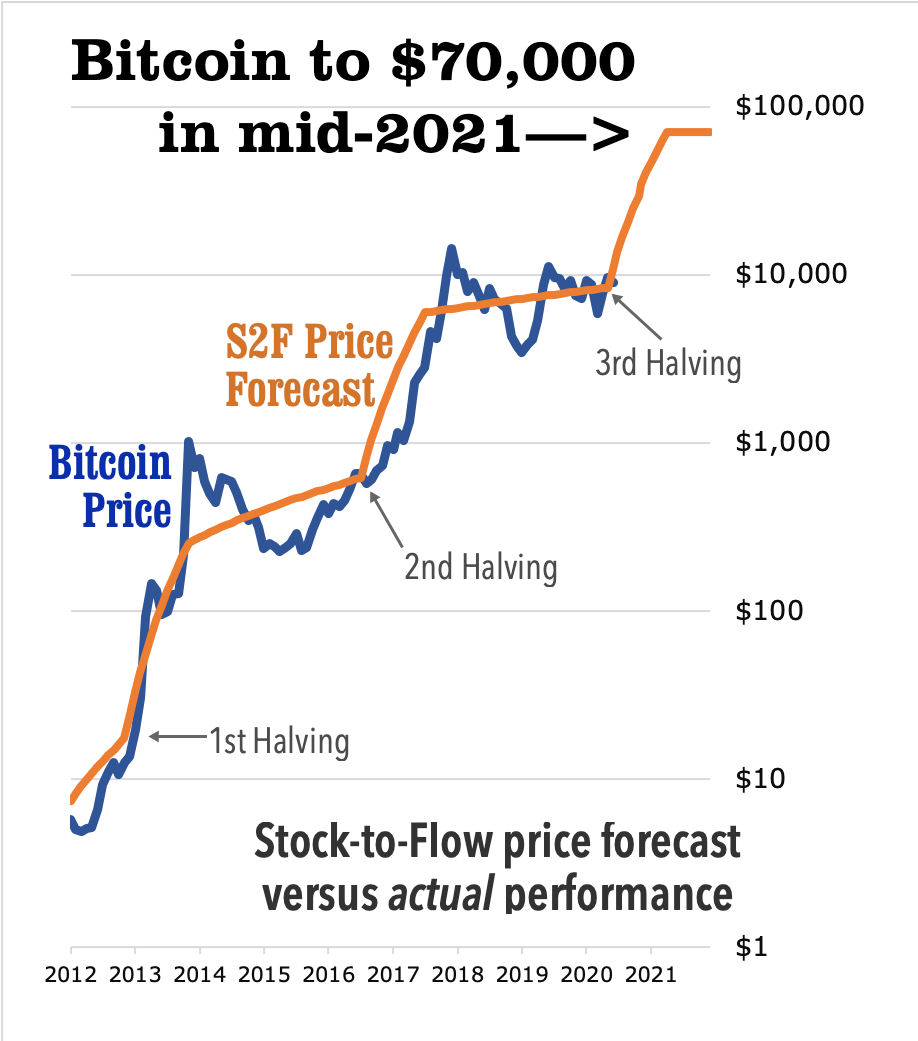 In general, we could treat the overall news backdrop as neutral. This month, positive and negative events are present but all of moderate importance.

Web traffic to cryptocurrency exchanges fell by 14% in June

Crypto exchanges experienced a 14% decline in their web traffic last month, with the total web traffic hitting a five-month low. Exchanges saw 98.1 million website visits in June, according to data gathered from web analytics firm SimilarWeb and compiled by The Block Research. 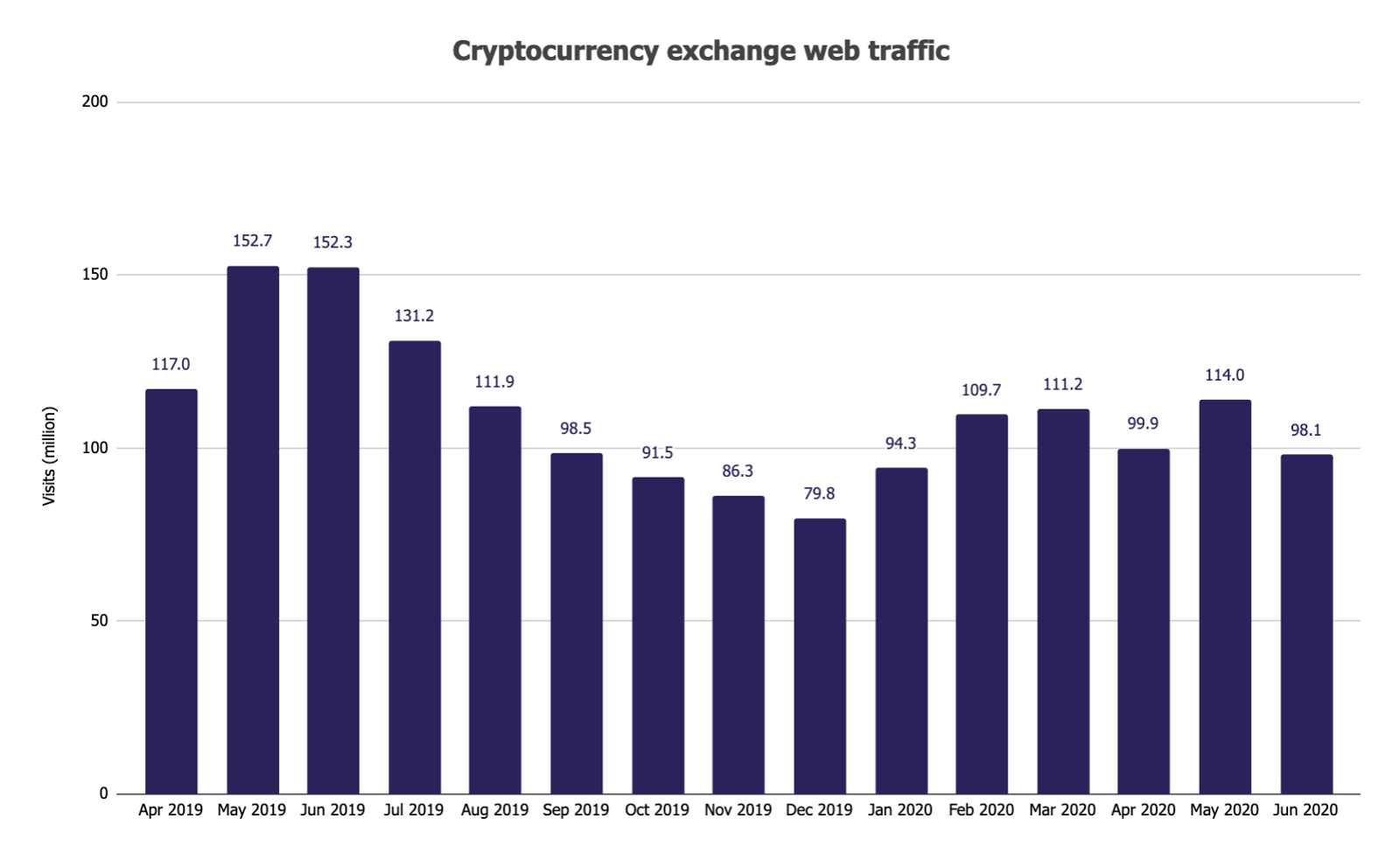 Historically, market cap and spot trading volumes have been positively correlated, but the trend seemed to have shifted in Q2 2020. Besides, Bitcoin’s average trading volume in Q2 was 20% lower compared to Q1. 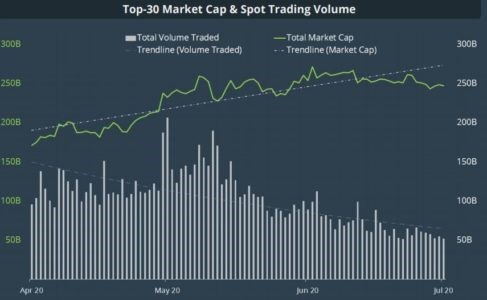 Fidelity is hiring a Bitcoin mining engineer to scale its operations

According to a job posting on its website, Fidelity is looking to design, build, and maintain the infrastructure to run and scale its Bitcoin mining operations. A Fidelity spokesperson told The Block:

“Over the past couple of years, we have expanded our mining efforts to ramp up our knowledge of the space. We have explored optimal locations, hardware procurement, mining farm setups, and the economics of the mining industry as a whole.” 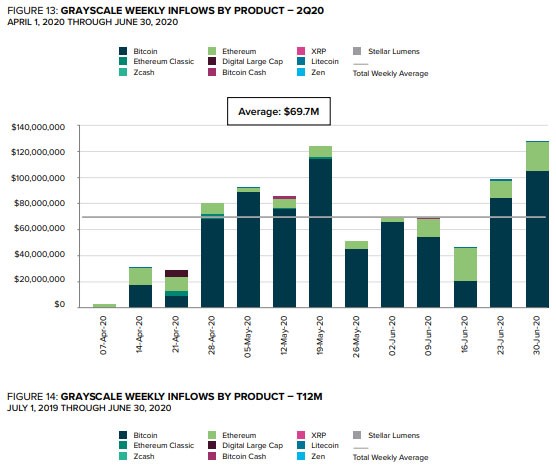 As a result of this acquisition, the company’s aggregate hashing power capacity will increase by 45% from current levels to approximately 357 PH/s and consume 12.8 megawatts of power.  This level of energy efficiency is due to Riot’s continued efforts to build its operations with the highest performance mining hardware on the market. 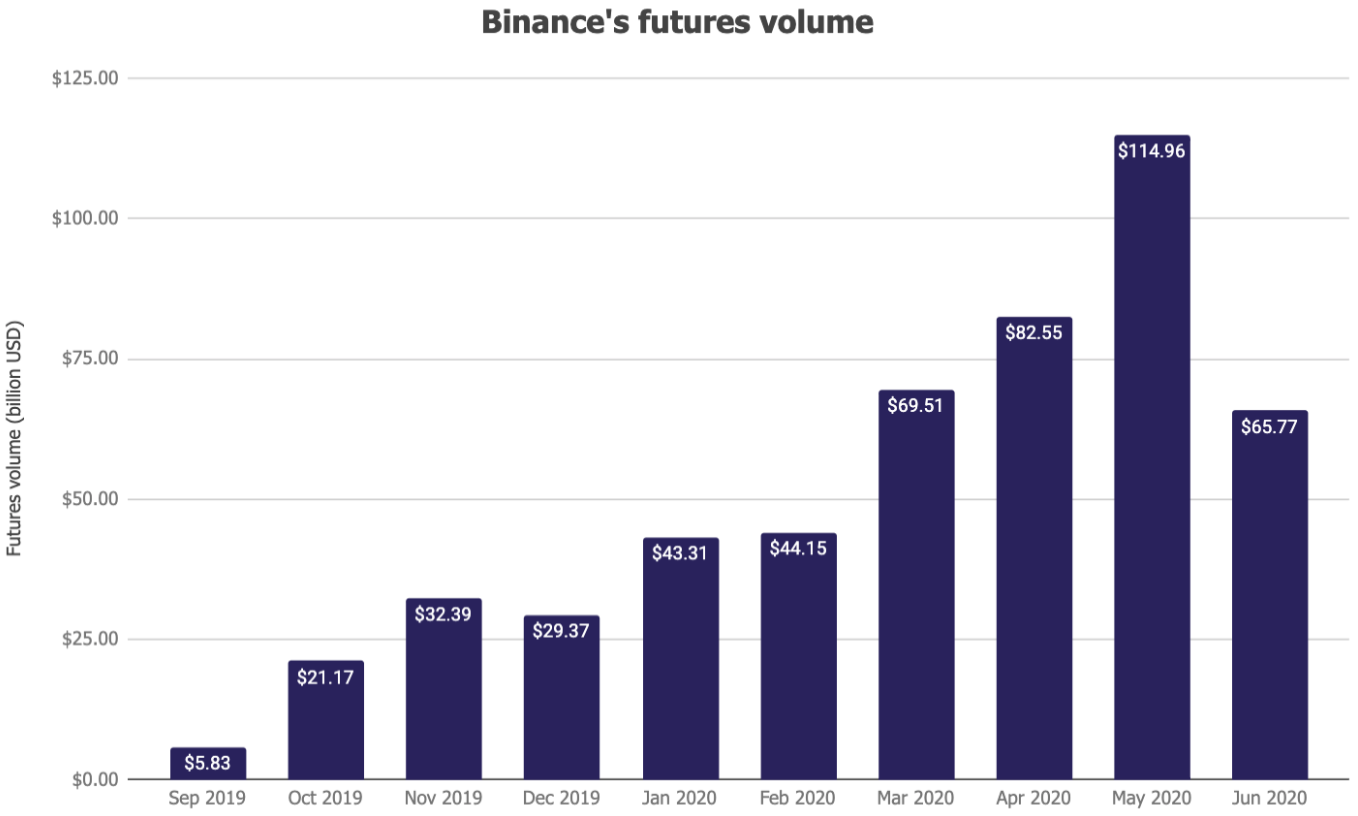 In July, we see quite a different view on the short-term and long-term perspectives. In the short-term, BTC keeps the door open for a plunge, since volatility has decreased significantly, institutional investors have cut their positions, and overall trading range and volume stand small, while price correlation to stocks increases. This makes investors worry. It is clear that Bitcoin stands in an “energy building” process, but this energy must be released sometime. Investors fear that it could be released to the downside.

On the longer-term, the situation is the opposite. The background of fundamental factors, news, and events indicates stable interest and demand for cryptocurrencies. The crypto business segment shows progress as whales like Mastercard, Paypal, Fidelity, and international banks, enter gradually.

Combining these two factors and taking fair value calculation into consideration, we conclude that Bitcoin stands at attractive price levels for long-term accumulation. We have confidence in its fair fundamental value since JP Morgan and SEBA Bank arrive at approximately the same amount. This means that – while BTC stands below that amount – it is undervalued; hence, this is a good time for accumulation.

However, we should not ignore short-term concerns. If technical factors trigger a substantial retracement on the market, the accumulation process will become more attractive. We do not typically place the monthly chart at the beginning of a report, but the $10,500 level is technically vital for BTC because it is a barrier for a long-term bull trend continuation. Since we have an excellent fundamental background and the overall forecast is up, we could accumulate while the price stands below.

Thus, we provide here two major blocks of valuation, technical and fundamental, with clear, common conclusions. Now, you have everything to prepare a good trading plan…