Risk management is one of the most vital concepts in trading. Having a clear understanding of when to take profits or cut losses is a critical factor in risk management. Trailing stop loss is a tool that helps traders to trade with discipline by reducing risk and maximizing profit along the way.

Getting Familiar with Stop Loss and Trailing Stop Loss

Before getting into the concept of trailing stop loss, let us understand what stop loss in trading even is. Later, we shall get in detail with trailing stop-loss orders.

What Is a Stop Loss?

Stop-loss is an exit order in trading that is used to cut the losses at a specified price. So, this order is kept below the entry price for a long trade. Likewise, it is kept above the entry price for a short trade. For example, let’s say a trader takes a long trade at $150 and places the stop loss and take profit at $100 and $200 respectively. So, if the price touches or goes below the $150 mark, the stop loss order gets executed, and the trader incurs a loss on the trade.

What Is a Trailing Stop Loss?

Trailing stop loss is a type of stop-loss order which blends factors like risk management and trade management. It is a varying stop-loss order, which helps lock in profits as the trade goes in the required direction and also covering the amount that could be lost if the trade does not perform. This order can be implemented manually by the trader or can be set up to work automatically through the brokers.

Stop-loss is a good tool for reducing one’s risk. However, the problem with them is that they are static and do not move. For instance, let’s say you purchased security at $100 by keeping the ‘take profit’ at $210 and stop-loss at $90. Now, if the price goes all the way up to $209 and drops to $90, then this protection will be worthless. This hence led to the invention of trailing stop-loss.

How Does Trailing Stop Loss Work?

Trailing stop-loss is a type of stop-loss order that adds a dynamic nature to overcome the hurdle, as mentioned earlier. It is derived from the combination of two concepts – the ‘trailing’ component and a ‘stop-loss’ component. With this trailing feature, the stop-loss is no longer stationary but trails the current market price by a specified amount (percentage). Doing so, one will be able to lock in profits along the way as the trade performs.

Assume that the current market price of the EURUSD is 1.1260. Let’s say you have bought this pair at this price and kept a trailing stop-loss of 10 pips. Meaning, for every ten pips the currency moves up, the trailing stop-loss will also move up by ten pips. But, if the price moves down, the stop-loss does not move down; instead, it remains static.

The tabular representation of the above example is illustrated below.

The summary of this trade is tabulated as follows.

Keeping a random trailing stop on any trade will no doubt reduce the risk and lock in profit along the way, but will lack logic in exiting a trade. By using the below strategies, the Trailing Stop Loss order can be placed accurately.

Support and Resistance areas are the ideal locations to place a trailing stop-loss. According to this strategy, for a long trade, as the price breaks above a resistance level, the stop-loss must be moved to the most recent Support level. This is because a break below the Support level signifies a probable reversal in the market.

Consider the below chart of EURNZD. Assume that a long trade was taken at the point, as shown by the arrow. The trailing stop-loss was kept below the entry price, as illustrated in the chart. Now, as the trade performed in the required direction and broke above the resistance level, the trailing stop was moved higher, at the Support Level. Similarly, it was moved two more times. Finally, the stop loss was triggered when the price went below the most recent Support level. All in all, the trade was closed with a profit. 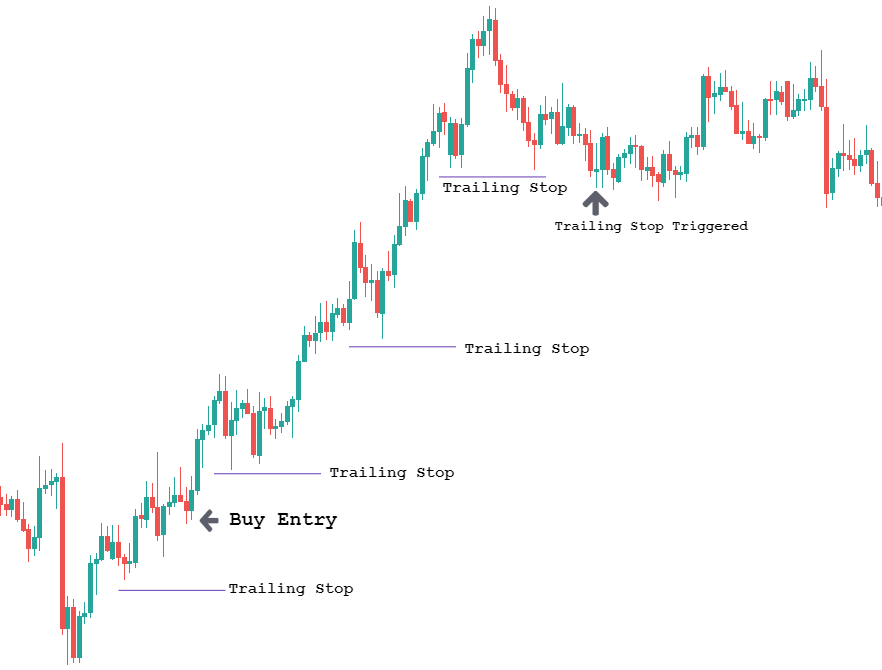 Moving Average is a technical indicator that averages out the past prices for a given period and represents it in the form of a line. Blending this indicator with a trailing stop is a great technique to exit a trade.

The strategy for this is simple. Firstly, make sure that the market is trading above the Moving Average line. Keep a trailing stop of your choice. Let the stop-loss trail as the price goes in the desired direction. And when the market drops the Moving Average, exit the trade.

A self-explanatory example is illustrated below. 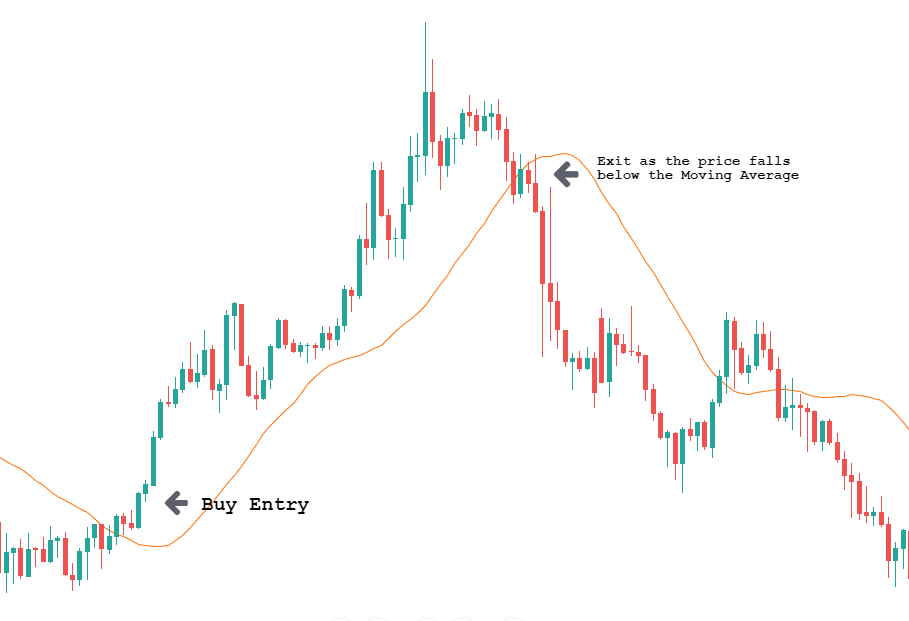 There are indicators that are being used by traders for placing the trailing stop-loss order accurately. Average True Range is one such indicator that adds great logic to the trailing stop-loss. This indicator basically measures the pip movement in a currency pair in a given timeframe. With this, one can determine the highest, lowest, and the live pip movement in a currency pair. For example, if the current value of ATR on the 1H timeframe is 25 pips, then we can expect the price to move 25 pips in the next hour and so on.

To use this indicator with trailing stop-loss, we set the trailing stop at a multiple of the ATR value. So from the above example, we set it at 25 pips or 50 pips or 75 pips.

Let’s assume you bought a currency pair at 1.050 by analyzing the chart on the 15mins timeframe. The ATR value on this timeframe is ten pips. So, you place a stop-loss order at 1.040. Later, as the price goes in your favor, trail your stop-loss such that the difference between the highest price the market witnessed since your entry and the stop-loss is ten pips. That is, if the price moves up to 1.070, then you move your stops to 1.060 so that the difference remains ten pips. Continue to do this until the price hits your take profit or triggers your stop-loss order.

Note: Indicators work exceptionally well sometimes, and tend to fail sometimes. There is no perfect method for it. So, one must try these out on a demo account first and then apply it on a real account.

The Pros and Cons of Trailing Stop Orders

We hope you find this article informative. If you have any questions, please let us know in the comments below, and we will be more than happy to help. Happy Trading!