I do not know, guys, have you signed that in recent month there were significantly less amount of analysis and especially forecasts on Bitcoin perspectives, even from big banks. I’ve checked for the last month’s new and found no single more or less argumentative analysis or forecast on BTC price, or any other crypto currency.

And this phenomenon has logical explanation. Situation on a global financial markets start changing with extreme speed. Global financial system is falling apart, with big distortion in favor of the US assets. Everything is dropping to support the US economy and its currency on the surface. The first victim has become a Great Britain. With the combination of negative factors, high anticipated inflation and tax cut, announced by new PM, L. Truss have crushed GBP and bond market, which actually now stands out of control due massive margin calls. 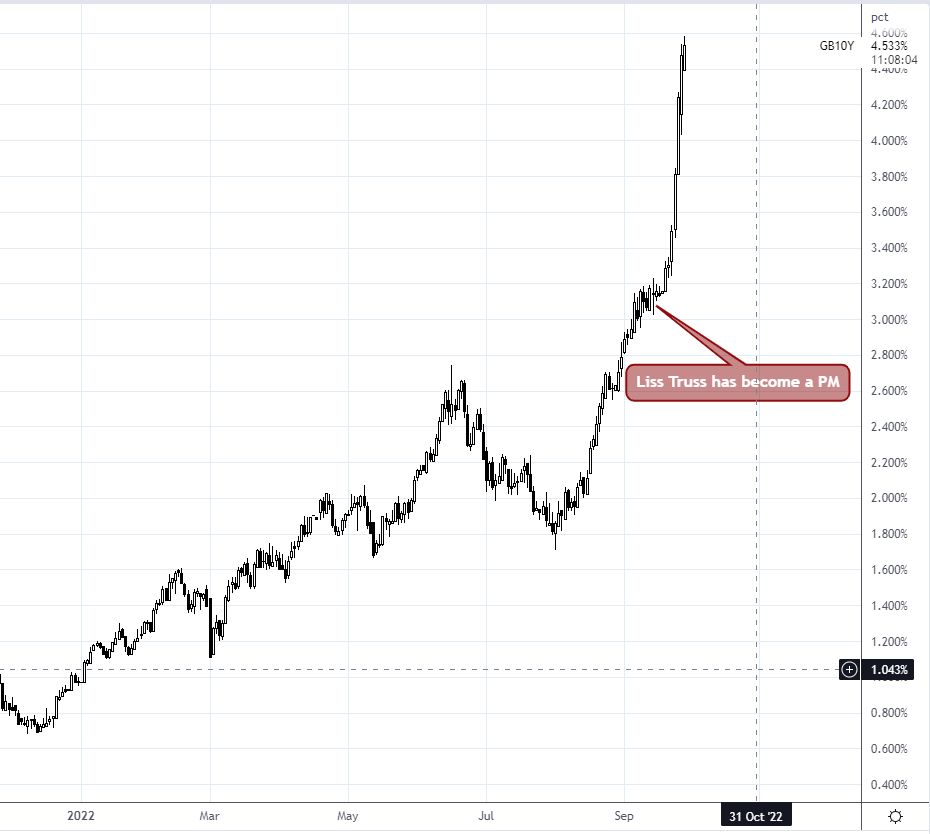 Why GB has become the first most hurt economy? It has specific structure of foreign reserves. They are just $100 Bln which is around 3% of national GDP. It means that have very limited space for maneuver to support the currency, say, by intervention. Too few dollars on the balance.

At the same time – the processes that we see in GB is an example what we could see very soon in other economies. I would suggest EU and Japan are coming next…

But Bitcoin shows relatively quiet action in recent months, no big collapses, although stock market has dropped significantly. Many investors start thinking that market probably has set the bottom. Our task here is to show why it is not.

Wild gyrations in markets have left cryptocurrencies dueling with the dollar for the title of top-performing asset this quarter.

The MVIS Crypto Compare Digital Assets 100 Index has added 7.3% since the end of June, whereas stocks, bonds, commodities and gold suffered losses. The Bloomberg Dollar Spot Index is up by a similar magnitude over the period, reaching a record high.

The slide in conventional assets reflects the turmoil caused by a global wave of aggressive monetary tightening to fight inflation. More attractive interest rates and the need for a haven from the maelstrom have in turn buoyed the dollar.

Why volatile digital tokens have so far bucked the wider third-quarter selloff is an open question. One factor is a 27% jump in Ether on optimism about an energy-saving revamp of its Ethereum blockchain. Others speculate crypto may have hit its nadir in June after big blowups catalyzed by the $60 billion wipeout in the Terraform Labs ecosystem, which saw the TerraUSD stablecoin and linked token Luna unravel.

“This recent performance is perhaps an early indicator that we are past the contagious volatility following the Luna and crypto-lender collateral damage of the last quarter,” said Jonathon Miller, managing director for Kraken Australia.

Miller added that the Ethereum software upgrade, known as the Merge, also “moved the needle” on the attention falling on the crypto industry.

It could be that crypto is merely delaying the inevitable — Bitcoin is only a 6% swoon away from breaching its June low of about $17,600 and many prognosticators reckon the chances of such a slide are high.  Surging real interest rates — seen as the true cost of borrowing — are heaping pressure on a range of risk assets and crypto is no exception.

Those of a more optimistic bent can take succor from seasonal trends. Bitcoin has posted an average return of just over 22% in October over the past decade, the most after the month of November, according to data compiled by Bloomberg.

A 60-day correlation coefficient for Bitcoin and contracts on the S&P 500 grew to 0.72, just short of a May record.

“Right now, it is very much a proxy for beta in the market,” John Porter, CIO and head of equities at Newton Investment Management, said of Bitcoin. “Crypto’s going through growing pains right now. We just don’t know what it’s going to be when it grows up, if you will.”

“It’s a more speculative investment and right now investors care more about dependability and cash flows and all that. In our view, that’s not a backdrop that changes into next year. So we see more downside risk in risk assets and crypto would be a part of that market.”

The declines also come despite MicroStrategy Inc.’s announcement that it purchased about $6 million in Bitcoin between Aug. 2 and Sept. 19.

Cryptocurrencies are facing a new threat: the lure of Treasuries offering a similar payout for a whole lot less risk.

In a rare reversal, crypto yields that institutions typically seek out have fallen below what the US government pays to borrow for three months, giving the hedge funds and family offices that have flocked to the digital space one less reason to keep investing.

The Federal Reserve’s hawkish stance is driving up interest rates almost everywhere — except in the speculative world of crypto, where yields have collapsed alongside volumes, wiping out some of the main avenues for generating double-digit returns, while the implosion of the Terra stablecoin project and the failures of crypto lenders like Celsius Network shook confidence.

“Two years ago, interest rates in crypto were at least 10% and in the real world rates were either negative or near-zero,” said Jaime Baeza, chief executive officer of ANB Investments, a hedge fund focused on digital assets. “Now it’s almost the reverse, because yields in crypto have collapsed and central banks are raising rates.” 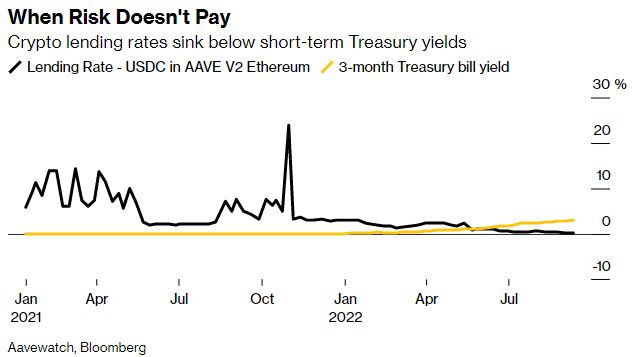 This year’s crypto winter has already challenged some of proponents’ key arguments, such as the asset class being a hedge against inflation and political turmoil. Instead, Bitcoin has traded pretty much in line with stock benchmarks like the S&P 500, except that it’s dropped at a much faster pace.

Because they have no direct relation to central bank rates, crypto yields can slump even as borrowing costs spike across financial markets to reflect steep Fed hikes. That’s creating a mismatch that could lead to a secular stagnation in some of the world’s most speculative assets, some market observers say. Lower yields will make it less likely that investors buy tokens to lend them out, leading to lower demand and in turn, lower prices.

A key measure of investor interest in yield-generating crypto activities is the total value locked in marketplaces where much of the lending takes place — so-called DeFi platforms. This measure has declined to just $60 billion from its peak of $182 billion in December last year, according to data from DeFiLlama. 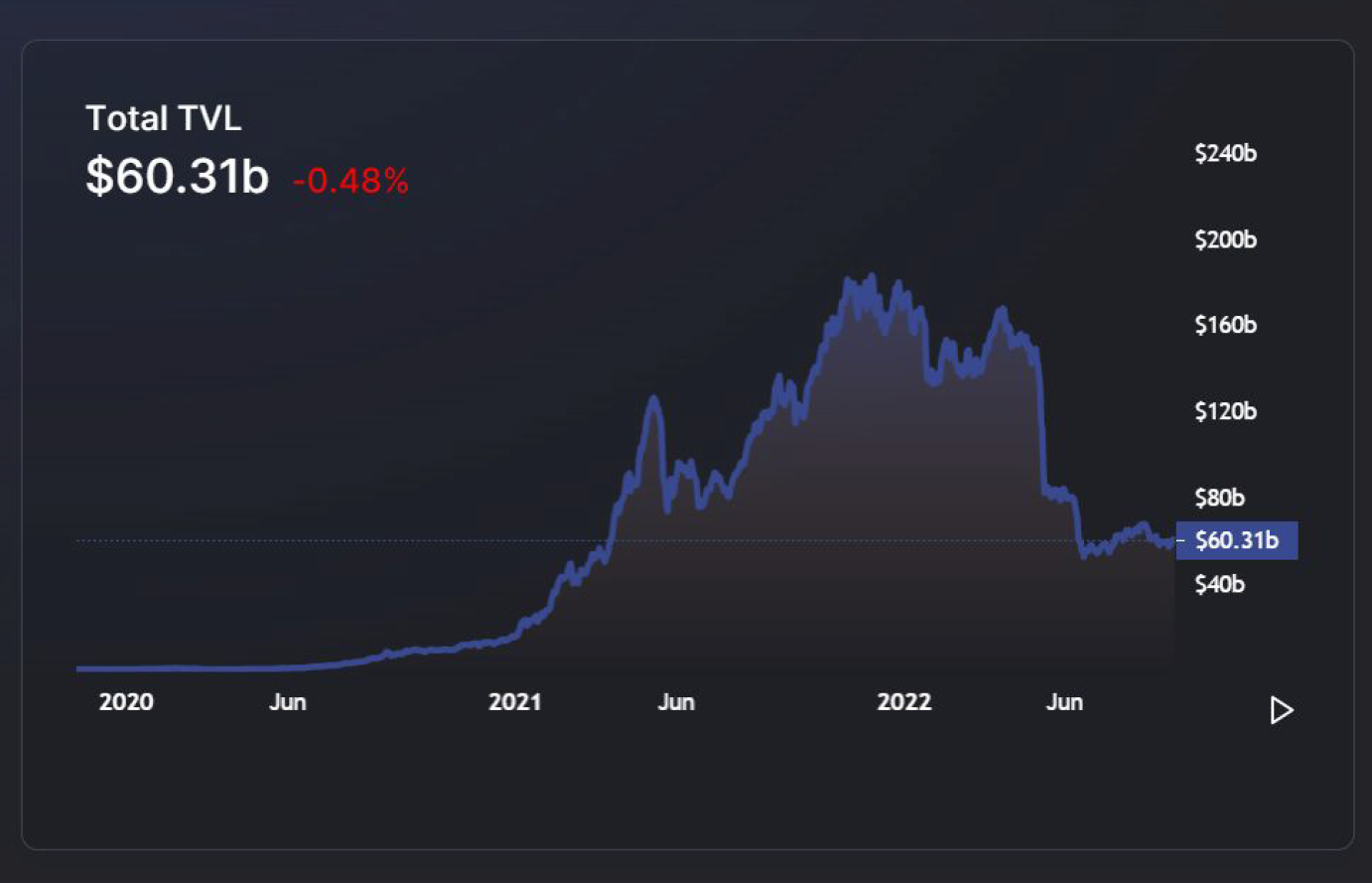 Kaspar Hense, a portfolio manager at BlueBay Asset Management, says that current Bitcoin price is still too high, and suggests $10,000 would be closer to fair value. Double-digit yields were mainly thanks to distorted real rates when central banks kept borrowing costs anchored near zero, Hense argues.

“Now the environment is very different,” said Andrew Sheets, chief cross-asset strategist at Morgan Stanley. “A key cross-asset theme has been the shift from a near zero and negative rate environment to one where you can get over 3% on a triple A-rated T-bill that’s guaranteed by the US government. This will have an impact on the performance of assets with no yield such as gold, some tech stocks and crypto.”

But, we’re mostly interested with the last one, as we suggest that action should happen: 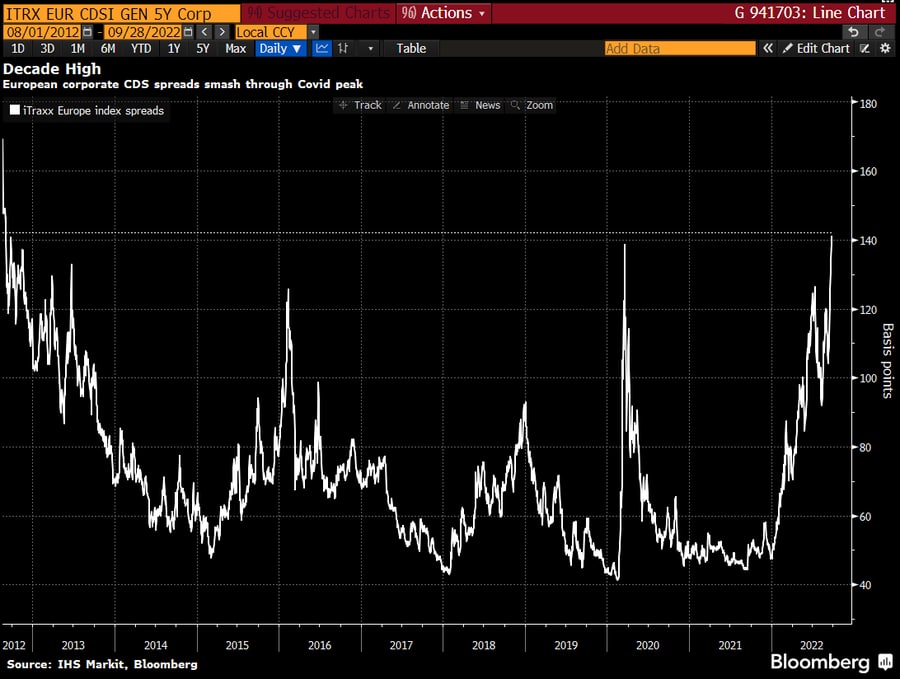 As a result of unprecedented Fed policy, US market has lost ~ 57 Trln. of capitalization. Fed absolutely doesn’t care about the hurt of overall economy system. All that they need to achieve is to pump on the bond market as much liquidity as they could get. 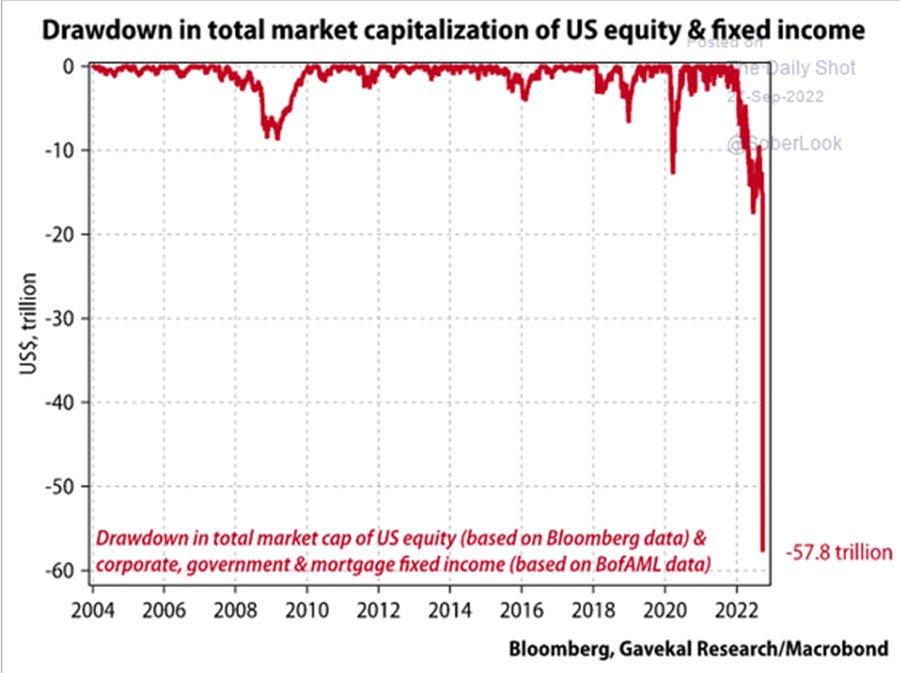 First impact could be on banking sector where CDS also hits maximum levels since Lehman collapse. For example, here is Credit Suisse CDS: 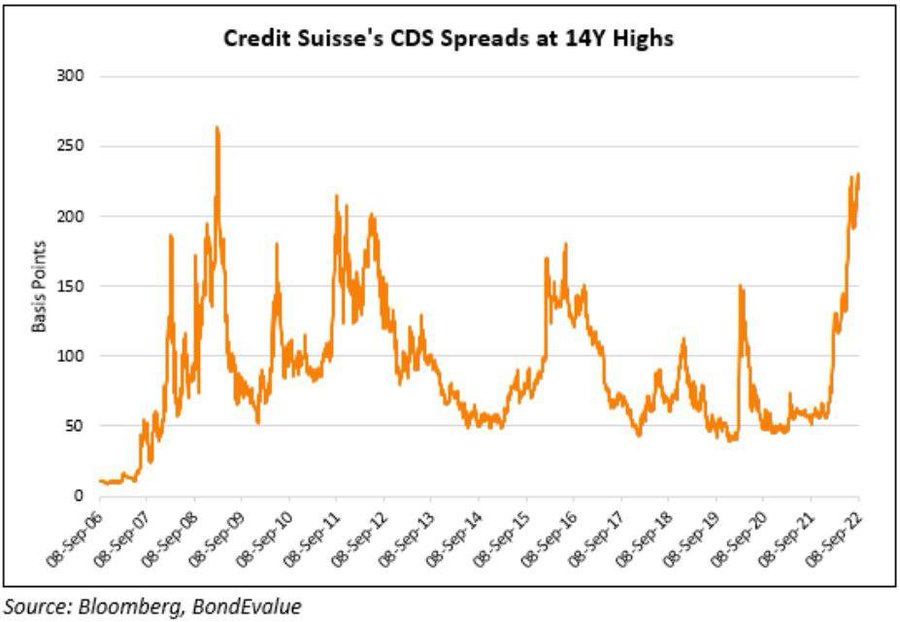 The least stable companies are coming to the edge of defaults and bankruptcies. As you understand, in current environment, Fed, while crushing global stock market and bond markets of the opponents hardly lets happily exists to cryptocurrencies. 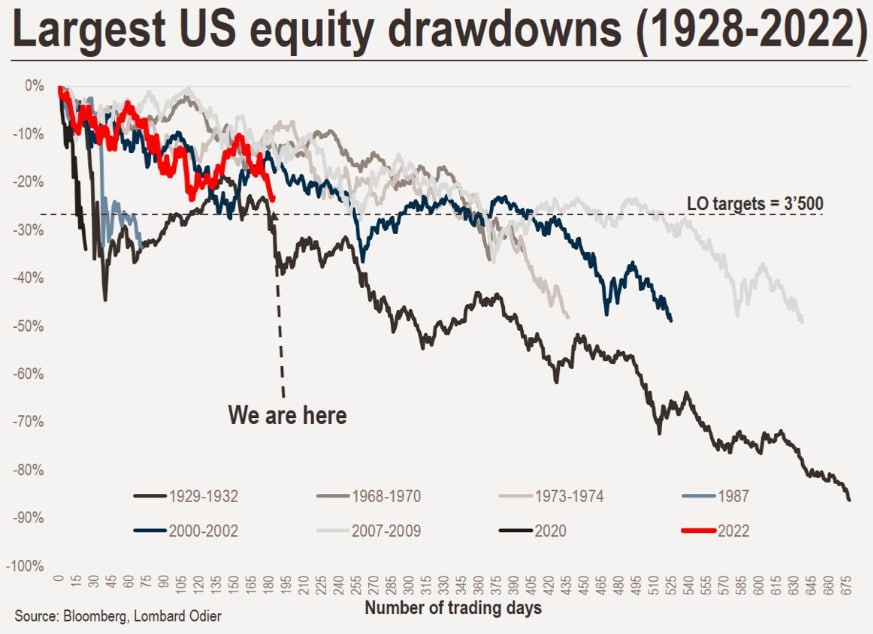 Fed will pump out all liquidity that it could from BTC, ETH and others.  We suggest that current pause is just a pause – temporal relief before next downside drop. We keep our 12.4K and ~9K target intact for BTC.

Statistics analysis of correlation between CPI numbers and P/E ratio shows that market is two times above the meaning value, which suggests two times drop of stocks capitalisation soon. We expect S&P levels below 2500 points: 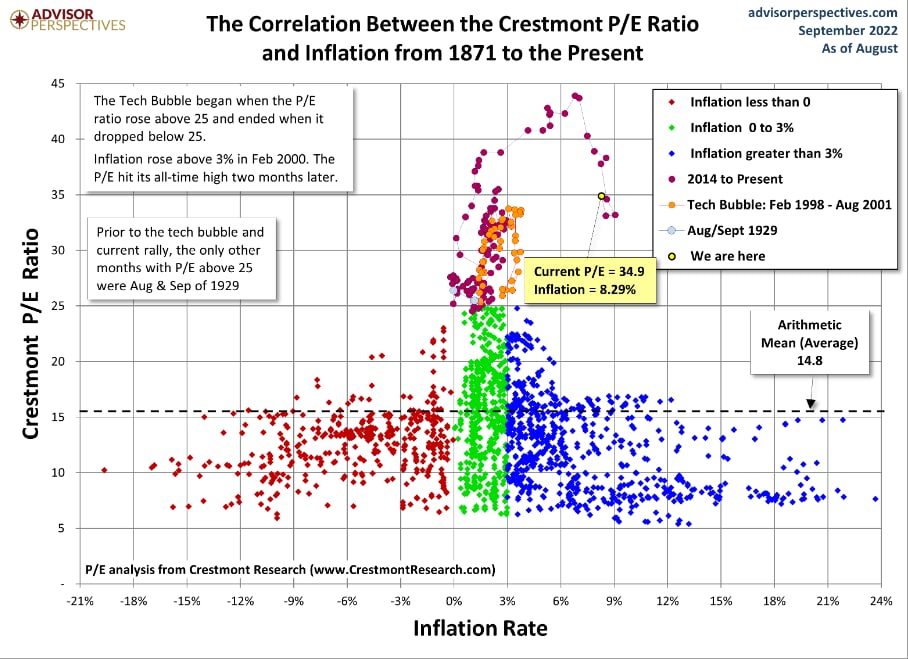 And its really big chances that Bitcoin will repeat the shape of Amazon shares in early 2000s. “The bell” shape is most often happening one with the performance that we see now. 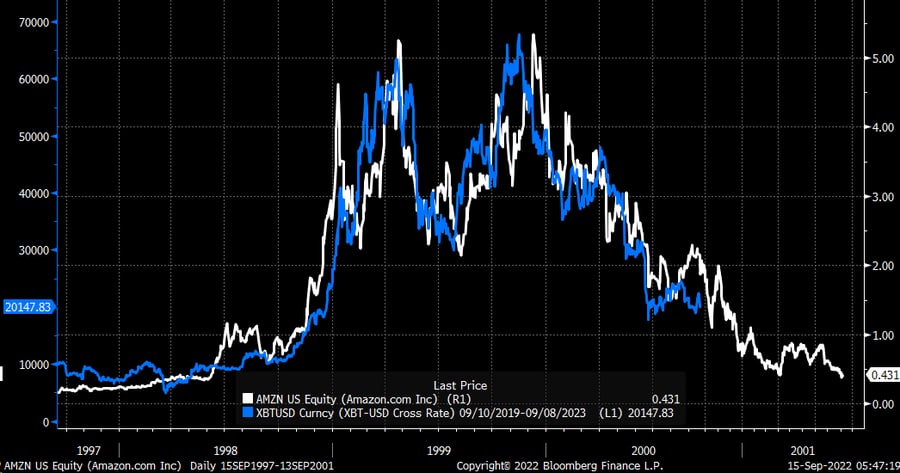 Technically we have two reasons to suggest at least one additional leg down. First is market can’t show any meaningful bounce from 20K area , which is previous top. Inability to do it and downside breakout puts price in new trading range of 0-20K, the same way as Amazon chart above:

Second  and the major one – bearish dynamic pressure on the weekly chart, suggesting downside breakout below the recent lows in a shape of butterfly pattern.

Amazon was able to climb out of the bottom, but the question is – whether Bitcoin will?

This time we do not need to make extended conclusion, guys. Everything goes according to our long-term view. Fed doesn’t leave BTC market alone, and definitely grab all possible liquidity out of it.  Maybe 12.2K level is the one where it will be nothing to sell any more. At this moment we do not see good background for investing into bitcoin market. Risks are too high, with anticipated 4.5 % Fed rate and coming US November elections.