IronFX Australia cancels its license in Australia. Financial Fraud Lawyers tell you why in this article!

The Financial Fraud Lawyers network specializes in defending the interests of traders who invest on regulated platforms such as Forex, CFDs, binary options and cryptocurrencies. Several of our articles have assumed the malice of the broker IronFX. Today, in this article, we will show you why IronFX Australia is relinquishing its license in Australia. Is it because of our legal actions, articles or evidence? We will explain it to you in this article.

I / Is IronFX Australia relinquishing its license because of us : Financial Fraud Lawyers?

IronFX is a well-known brand in the field of online FOREX trading. This broker has offices in Cyprus, London, Johannesburg and Sydney and is authorized in France by CySEC due to its European passport. It has committed wrongdoings in the past that have been investigated by the authorities. In December 2017, and in November 2015, CySEC issued a decision against IronFX due to alleged violations of its regulations. As a result, EUR 335,000 was paid by IronFX as a result of the investigations conducted.

In order not to arouse further suspicion, we believe that IronFX was forced to relinquish its license in Australia as a result of our work and evidence regarding the possible connection with La Maison Du Placement. Indeed, IronFX Australia, or Notesco PTY, appears to have been damaged by our actions in Australia.

You can find below the proof that IronFX Australia’s license in Australia was canceled. 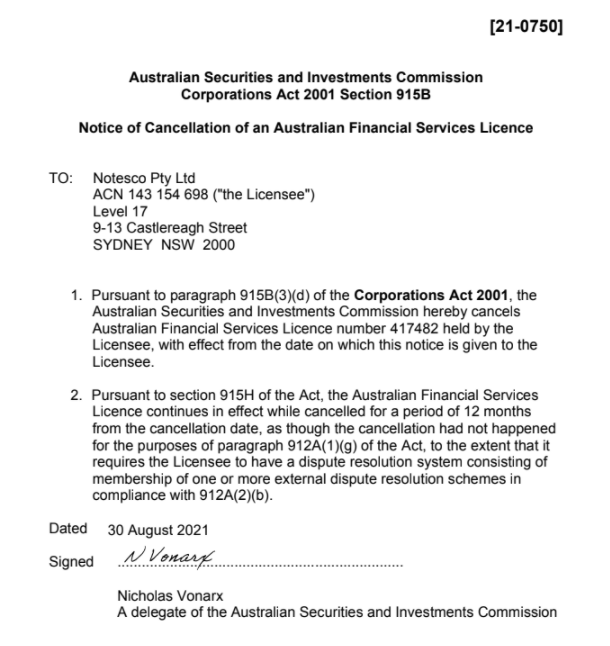 II / What is the connection between IronFX and la Maison du Placement that we assume to exist?

As you know, in our previous article, the lawyers of Mikov & Attorneys have analyzed evidence showing that La Maison Du Placement has been involved in illegal activities, probably with the complicity of IronFX.

Indeed, with the help of one of the victims, we were able to understand the alleged fraudulent scheme of both organizations. Our victim revealed that in order to invest with La Maison Du Placement, he had been redirected to the IronFX’s website registered in Australia. We know that he is not the only one who became a victim of this scheme.

However, IronFX Australia was not authorized in Europe by the Cyprus Securities Exchange Commission (CySEC) or the Autorité des Marchés Financiers (AMF), unlike IronFX EU.

In our opinion, such an organization between European clients, unregulated and regulated platforms is illegal and therefore contrary to the Markets in Financial Instruments Directive (MiFID).

Here is a diagram to prove our point: 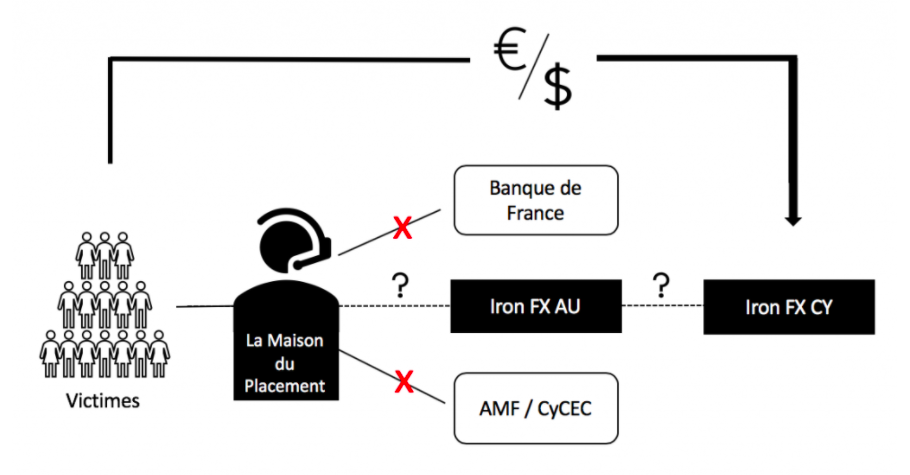 In conclusion, we assume that the platform La Maison Du Placement, serves as an intermediary (Introducing Broker) to IronFX to approach clients and get them to invest outside the European regulatory framework.

Since this article, the Financial Fraud Lawyers network has been defending with some success dozens of victims of this scheme before the Australian Ombudsman. IronFX Australia did not take any responsibility for our client’s losses, and our lawyers took the case to the Australian Ombudsman for adjudication. A decision has been rendered in our favor, and the other cases are currently pending.

III / FXPace and La Maison du Placement: a similarity in their illegal schemes?

As you know, IronFX is the brand name used by Notesco Limited.

However, this name appeared in one of our articles – FXPace: the prelude to an illegal scheme?.

This broker uses the same technique as the one used by La Maison Du Placement. Indeed, FXPace does not have the necessary regulations to trade in Europe, so it decides to use other offshore companies such as the Fletcher Group and Walter Gestion. We could assume that the actions of FXPace and La Maison du Placement are the same.

IMPORTANT: Trading on an EU-regulated platform is the only way to be sure of your investment as it offers ethical reliability and legal protection. Also, when someone asks you to invest on a platform other than the one you have chosen, we advise you to be wary.

In conclusion, our Financial Fraud Lawyers network is regularly engaged in gathering and disseminating information about financial brokers. IronFX still seems dangerous, and we invite you to trade on another trading platform.

Founder and Manager of the network Financial Fraud Lawyer (financial-fraud.lawyer) and managing partner of Law Firm Mikov & Attorneys, Konstantin Mikov is a LL.M. graduate in European Law from the French University Montesquieu.

He acquired extensive experience in prominent local and international law firms before creating Mikov & Attorneys in 2015. He is tightly specialized in Forex & Crypto Markets legal practice and has represented more than 500 victims since 2015 of illegal practices by Forex & Crypto Brokers.

He has successfully represented clients from France, Belgium, United Kingdom, Germany, Spain, Luxemburg, Portugal, Switzerland, in connection with the recovery of their losses with numerous investment brokers operating in the EU, such as: IronFX, Trade360, UFX, NessFX, EverFX, Roinvesting, Alvexo etc.