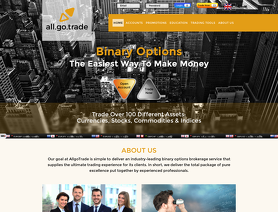 Join live discussion of AllgoTrade.com on our forum

Be warned people Josh Volk and Nicole Chase are their to scam you. I lost about 4800. They are liars and cheaters.

All go trade is a scam & steal customer's money

All the other comments about All Go being a scam & fraud are
totally correct & accurate. I invested with a Michael Bell & the account reached $88k. I wanted to withdraw funds but he said there was a $20k "bonus" that had to be repaid with new funds. I said I would payoff the $20k if I could then immediately withdraw that money plus prior invested $$ and was assured that would take place. I wired the funds in & Mr Bell sent confirming skpe & e-mail messages saying he had submitted the wire transfer request to accounting & I would be getting all of my money back. I kept checking my account & discovered that he made two 12 month trades investing the entire account and also added a $20k bonus which effectively blocked any withdrawal. I immediately contacted the support department & Mr. Bell saying the trades were not authorized & that I wanted them cancelled. After much delay they said they could do nothing & Mr. Bell was no longer with the company & that they would submit a complaint with the FCA to get the trades reversed. They provided a statement, undated & with a signature block for Michael LLoyd, Head Legal Department but no signature confirming that the dispute was submitted. They then asked for $1200
GBP to continue to process the claim. I contacted the FCA and was told they have no authority over binary options, had not received a complaint from All Go & did not charge fees. I sent a detailed letter to All Go requesting that they explain the situation with the FCA and have received no response and no money. This company is a fraud the employees are thieves and they should be prosecuted.
JKH

IDENTIFY THEM AS SCAMMERS

They are fantastic crooks. Traded my account without authority then made about 100$ then traded entire account and lost £319 balance of account. Then told me to put $2000 for meaninful trading.
Put another $200 hoping to trade myself and recover the loss but when I could not and balance was $153 requested withdrawal on 25/10/2016 No response. As of today 11 February 2017.
. Mike Norris was the rouge that blew my account and asked me to put $2000 William Billows and Mike secretary Debra Jo are all ROUGES

They are clever cons and getting any deposits back will be next to impossible.

They were the most clever of all the scam BO brokers I've come across. The worst.

They had my balance of more than 500 Dlls and I request a withdraw several times and I don't have any answer.

Now I know they took my money.

BE CAREFUL WITH THIS BROKER.

The broker has closed shop I think. I made a withdraw on the 22nd of November and have not received any email to confirm it has been processed. Support keep saying they will look into it. Also they made unathorised trade where I specifically told them not to trade on it. I even took a screenshot of when I gave specific instruction to prove it.

Allgotrade owe me $4389. I took a screenshot telling them not to trade on my account as I have proof of what my actual total is. They did not listen and went ahead and trading the whole amount. Now I can&#039;t get a hold of them as their website as well as their website is down. What to do now?

I also have contacted the FCA, that's the financial conduct authority in the UK. They said because it's binary options( I did explain it was Forex, but they were deaf to that) and binary is not regulated they can't help. I also contacted that UK Fraud police, 2x, and they came back not willing to help either. I recently( yesterday sent my story to NFA ( national Futures assoc) and waiting to hear from them as well. My next contact is going to be the FBI. In case anyone does not realize, the FBI has offices all over the world.
My point to tell you all this is very simple. If we continue, and continue, and continue, to send our stories to as many organizations as possible, someone, somewhere is going to listen, and bring these crooks to justice! I do believe there is strength in numbers, so if you people want results, I suggest you start sending your story all around the world like I have been doing.


THIS IS WHAT YOU ALL MUST DO IF YOU WANT ACTION. GO TO WWW.CFTC.GOV AND FILL OUT A COMPLAINT I HAVE BEEN IN TOUCH WITH THEM, AND ENOUGH PEOPLE COMPLAIN THEY WILL GO AFTER THEM YOU CAN SEE ON THEIR WEBSITE MANY SCAMS WHICH THEY HAVE GONE AFTER, AND GUESS WHAT THE FIRST ONE IS BINARY BANK. THEY GO THEM, AND PEOPLE GOT THEIR MONEY BACK. PLEASE JOIN ME IN THIS QUEST

Allgotrade will take your money and you will never see it again. I wish that there is something that could be done to put these scumbags out of busin

Allgotrade is the biggest scam of all scams brokers out there. Never deposit your money with these bunch of thieves. Nicole Chase, Ryan Parker, Jeff Bell, and the head of the snake, Josh Volk, are just some of the names you will come across from this company. They will make it look like you are making money, to get you to deposit more money. But don't be fooled by what you see as far as trading history results. All you will see are winning trades, so the profits grow very quickly. But the truth is, they manipulate the trade history. They removed all loosing trades, so it looks like their success rate is very good, but that's just part of their scheme to get you to believe that they are making you money, Then when you ask to withdraw the money, they will purposely lose all of your balance by placing it all on a 60 seconds trade. This is what they did to me and my family members that I have referred to them. Josh Volk place all of our balance in our account on a 60 seconds trade and lost it all, even if wrote him to not make trades on our accounts. I have proof of the message I have sent to him, and their support, about not placing trades on our accounts. Josh Volk lost a total of over 700k us dollars, from our binary account, all in 60 seconds. What a total scum bag. And he even got the nerve to tell me that there is a way that he can recoup the losses if I deposited more money. What an asshole! So people, let me warn you about allgotrade. Do not give these scumbags any money!
Sort by:
Show: