June 4, 2018:  Based on an FPA Traders Court guilty vote and the numerous regulator warnings against the company, the FPA considers USI-TechInt.com to be a scam.

The FPA warns all traders against placing any money with this company.  If you have placed money with the company and cannot withdraw it, please contact your state or national regulators immediately. 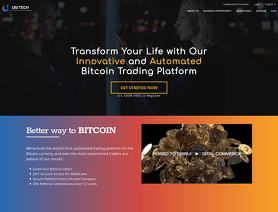 Join live discussion of USITech-Int.com on our forum

DO YOU RECOMMEND THIS COMPANY?
YesNo
Let other traders know if this service is worth checking or should be avoided.

USI-Tech is total scam!! Be careful

Issue escalated to Traders Court Rimma vs usitech-int.com | GUILTY
USI-Tech claims to be registered in Dubai but in reality it is not registered anywhere and the majority of its customers and promoters are in the USA. A main USA promoter Duane Noble AKA Byron Sneeringer has an extensive criminal record. The company claimed to make earnings by trading and mining but did not do either. The company offered 3 products: Forex trading, BTC packages, and Token (Tech Coin), and all of those are complete fraud and have been misrepresented by the company. On Dec. 20, 2017, Texas Securities Commissioner Travis J. Iles entered an Emergency Cease and Desist Order against USI-Tech Limited. On January 5, 2018 the company stopped paying USA and Canadian customers, and on February 24, 2018 the company officially breached the contract with us. I invested in USI-Tech first time in May of 2017. Now USI-Tech owes us (myself and my group) about 50 BTC. Back in mid March , 2018 we requested a main USA representative Duane Noble AKA Byron Sneeringer to return our money; he refused to return our investment and also said we would be sorry unless we just go away and made physical threats, which were reported to the police and the FBI. They still owe us money until this day.

May 10, 2018 - 1 Star USI Tech Limited is an HYIP or high yield investment program that offers an ROI of about 1% daily for 140 days, equally a total ROI of 140%. The company claims to be registered and based in Dubai, UAE and specialize in trading on the cryptocurrency market with their automated trading software that they invented.
I noticed that the websites have two different business addresses listed on them. Their official website shows the following information:
USI-TECH Limited
P.O Box 122036 Dubai, UAE
Dubai Business Registration: ICC20160282

This information is NOT valid. Actually it belongs to another Dubai business by the name of Rakicc, a Middle Eastern investment consulting group which is not affiliated with USI Tech. Its website link is: rakicc.com/agents/fidfinvest-middle-east-consultants/. Apparently USI Tech has chosen to steal another company’s address and business registration number.
The second address listed:
USI-TECH Limited
P.O. Box 65736
708 Fairmont Hotel Sheikh Zayed Road Dubai, UAE
It is a virtual office provided by First Business Center. Anyone can purchase a virtual office service from First Business Center (firstbc.ae/) complete with a registration number, phone number, and office location. It is important to note that none of the men associated with USI-Tech live or work in Dubai.
It turned out that USI Tech tried at some point to register a company in Ras Al Khaimah which is a common place for offshore businesses to register in the UAE.
It has been confirmed that USI Tech has not been registered in UAE for at least the past eight months.

USI-Tech’s original business model was based entirely on the access to an automated forex trading platform for which the company charged affiliates €600 EUR. USI-Tech claimed that their trading software was making ROIs of more than 100% annually. The company never provided any proof of past or present trading even taking place. Because the business was becoming less and less popular, USI-Tech’s owners decided to relaunch as a cryptocurrency opportunity. The main idea behind USI-Tech’s daily ROI was bitcoin trading and mining. But just as with the forex trading, the company did not provide any proof of bitcoin trading either.
Since March 2017, USI Tech has begun making huge headlines throughout the USA for its low-level entry point in investing Bitcoin into USI Tech’s Btc package program with guaranteed profit. According to the founders and leaders, all of this was possible because of USI Tech’s bitcoin trading and cryptocurrency mining connections.
In the video recording on May 3rd, 2017, one of the founders, Ralf Gold is talking about having their own financial license for USI-TECH (I quote) “ready this month…this is valid in the whole world to make own brokers and bullion, everything”.
In the late May, 2017, USI Tech announced on it’s website: “USI-TECH NOW IN USA”. The website domain (“usi-tech.info”) was registered on the 23rd of June, 2016. Joao Severino is listed as the owner of the domain, with an address in Portugal. This announcement is quite interesting because according to Alexa estimate, the traffic to the website started in the USA and the USA has always been the top source of traffic to USI Tech’s website, meaning USI-Tech is and has always been in the USA.
On August 28th USI-Tech held an event during which came yet another announcement. USI-Tech corporate got on stage and announced the law firm Hart & David. In what appears to be a direct challenge to the SEC’s securities regulation, he assured that Hart & David lawyers advised them that USI Tech’s unregistered securities was a “legal product”.

“It has been examined by our lawyers and in their legal opinion, it is a legal product.

“Our lawyers have done all of the research necessary.

They have talked to the Federal Trade Commission and they believe, in their legal

opinion, which is binding, that USI-Tech Limited is a legal network marketing

company – with their two products, the forex software and the BTC package, in the

In reality, USI-Tech Limited is not and has never been registered to offer securities in any jurisdiction they operate in.
On Dec. 20, 2017, Texas Securities Commissioner Travis J. Iles entered an Emergency Cease and Desist Order against USI-Tech Limited.
According to the order, USI-Tech is telling potential investors they can make more money by convincing other individuals to invest in the company’s bitcoin packages and by doing it the investors could earn “up to 35% commissions” based on its “unique referral marketing plan.” USI-Tech is not informing investors of the danger in being paid commissions from referrals. Individuals paid these commissions must either be registered with the State Securities Board or qualify for an exemption from registration. In addition to violating registration requirements, USI-Tech and the sales agents are violating State Securities Board rules by failing to disclose information investors would need to make an informed decision about whether to invest. The disclosure violations include:
Information about the facilities used to mine bitcoins, the costs of mining bitcoins, and whether they have successfully mined bitcoins;
The terms of the contracts and an explanation of USI-Tech’s “non-exclusive interest” in mining contracts; and
Information about whether the company’s financial condition is strong enough to provide a 1% daily return.
Following warnings were also issued against USI Tech:
1. USI-Tech investor warning issued in BC, Canada - Dec 18th, 2017
2. USI-Tech investor alert issued in Nova Scotia, Canada - Dec 22nd, 2017
3. USI-Tech investor alert issued in Manitoba, Canada - Dec 23rd, 2017
4. USI-Tech securities cease trade order issued in Ontario - Feb 16th, 2018
USI-Tech’s MLM offering is straight pyramid recruitment. There is no retail side to the business, with everyone signing up as an affiliate with access to the income opportunity.
With each USI-Tech affiliate required to recruit three affiliates just to qualify for matrix commissions, mathematically the majority of USI-Tech affiliates are guaranteed to lose money.

USI Tech Limited claims to be a technology company which specializes in the development of automated trading software in the FOREX market. Although there is no evidence or proof of the software capabilities, the company maintains that in the last 8 years, more than 100 software versions with different characteristics have been developed and successfully employed in long-term tests. USI Tech proclaims to have a top-class development team with over 20 years of experience whose software systems were developed for trading in direct cooperation with reputable brokers. However, when questioned about it, they were not able to come up with even one name of a development team member or broker.

It is confirmed that since the beginning of October 2017, there has been no trading at all taking place. It means that everyone who signed up with USI Tech since October was misled and lied to by the founders and leaders.
USI Tech was founded by Joao Severino and Ralf Gold, and they both have a history of being involved with some very questionable projects. Reportedly, Joao Severino has been barred from financial activity in Portugal, due to his involvement in a scam called AMC Invest. Ralf Gold has been reportedly involved with a number of Ponzi schemes, including AdsProfitReward, MX Fast Money, World Consumer Alliance, HourlyRevShare, AdsProfitWiz, APR Clicks, and Upper Game.
January 5th, 2018 the company suddenly closed our accounts in USA and Canada and since then I have not received any payments and they refused to return my Bitcoin.

They still have not returned my BTC . Back in mid March , 2018 we requested a main USA representative Duane Noble AKA Byron Sneeringer to return our money; he refused to return our investment and also said we would be sorry unless we just go away and made physical threats, which were reported to the police and the FBI.

May 5, 2018 - 1 Star I am joining with Joanna Cid who is your recruit and this is a request for both of us. Here is what happened: I invested in USI-Tech first time in May of 2017. Now USI-Tech owes us (myself and my group) about 50 BTC. Back in mid March , 2018 we requested a main USA representative Duane Noble AKA Byron Sneeringer to return our money; he refused to return our investment and also said we would be sorry unless we just go away and made physical threats, which were reported to the police and the FBI. We asked Forexpeacearmy to help us recover our bitcoin.