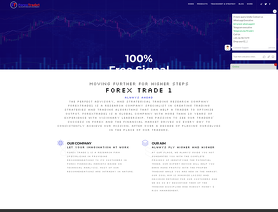 Service use: Live Length of use: 3-6 Months
My account was blown and all of my capital was lost. Very disappointing service compared to what is advertised.

Jul 28, 2019 - No Rating These guys are amazing and really provide a fantastic service, their results are second to none. Everything is transparent and you can watch their video's of profit taking live. Highly recommended.
More. Community discussion of this issue >>

Service use: Live Length of use: 6-12 Months
When I saw their fees then it was very difficult to digest that they charge a huge amount.
But looking at their performance - I could not resist myself to join because as a human being - when you see that you can earn a huge profit then it becomes difficult to stop ourselves.

However, I started and the initial months were very tough with them as results were not as same as what I saw.
I remained patient as told by them.
After 3 months, my account came into movement, and literally - I am not worried now if my JOB goes off as their trading has become by new earning.

Service use: Live Length of use: 0-3 Months
when ours deal final and i have paid 5000 USD as fee and after payment they blocked me from telelgram and whatsp chat and blocked my mobile number too please don't send any 1 USD to this company they are really and extremely bad and cheaters please

Service use: Live Length of use: over 1 Year
Hello forextrade 1 i have spent a wonderful 1 year with you guys am so happy really my life became stable now just because of you guys ... you copytrade service is amazing and signal service too
S
Steve1978
Sachsen, Germany,
Jun 26, 2020,
Registered user

Service use: Live Length of use: 6-12 Months
I have already written a review of Forextrade 1 but unfortunately it has not been published. I have been using the copy service for 1 year and I am completely satisfied. best servive ever. it also seems that many negative experiences have been made when you see these ratings. I don't want to and can't say anything about it and it is going like a dream,

They are wicked but organised scammers and fraudsters

Service use: Live Length of use: 0-3 Months
WARNING TO ALL! IF YOU DON'T WANT TO LOSSE YOUR HARD EARNED MONEY, DO NOT GO NEAR FOREXTRADE1!!

My story will these wicked fraudsters are pathetic. I started out Forex trading on my own and diligently grew my account to about 5000 CHF. Then I had an important project to focus on and that meant no time for Forex, so I sought a genuine Forex account management. That is how I fell into the hands of these scammers.
They insisted I have an account with a specific broker, I felt that was fishy but I went ahead to open a demo with this broker and gave them the details, and mehn in just a day the demo account grew by 150%. This encouraged me to go ahead with them. One of them that calls himself Jay was bombarding my phone with calls telling me how good their strategy is, and I had to pay a $2500 service fee that I will get back from the profit after a month before the 40 -60% profit will start. It seemed like a reasonable deal and I fell for their gimmick.
I paid the $2000 service fee, gave them access to my 5000 CHF account, signed a form, etc. What I experienced from that moment is nothing short of an act of wickedness from Forextrade1.
I noticed they were not initiating the trades they publish on their telegram on my account but was opening useless trades on a specific currency pair. I complained and they replied after several hours that they will look into it. Then, just two days of giving them assess to my account, they set a SELL trade when the market was clearly BUY, and as the market kept going long, automatically more SELL trades were opened WITH HIGHER LOT SIZES, giving me losses that are going to clear the account. I saw these and called them, no one was picking up, and I tried closing the trades myself, but once I close a trade another automatically opens opposite the market direction with a higher lot size. This is how my account was cleared, and I lost the 5000CHF in the account.
After sending millions of messages to them, one guy replies saying they know of the issue and will give me a solution in 48 hours, I waited for 48 hours and contacted again, and what I got from them was that I SHOULD DEPOSIT ANOTHER +1000$ with a different broker and they will recover my losses. That is when it dawned on me that these guys are wicked. I asked them that they have my 2000$ I paid 2 days earlier, so they should use 1000$ from that and make the trades that will recover the losses, and they went silent again, and when contacted they say they have provided a way to help me and I don't want to take it. I am intelligent for that, I am not a gambler that will be going for a clear scam trying to recover losses. This is the situation of things now, and I have informed my contact at Interpol and they are being investigated right now. All the text messages, calls, pieces of evidence, and IP addresses have been transferred to them. I am not doing this just because of the loss but because of the wicked act and for posterity reasons.

I HAVE DONE MY PART< YOU HAVE BEEN WARNED, DON'T BE A VICTIM!!!
1 trader has found this review helpful

Service use: Live Length of use: 3-6 Months
The first service i used from Forex Trade 1 was the signals service for which i paid USD 1000. That is useless and pathetic, they will send you vague entries which seldom hit and they would keep posting on the what's app that 'hey X entry missed by 10 Pips and if you had entered you would have made this much' etc. Very useless i must say.

Then they challenged that i can give my demo account to them for trading to see how their copy trading works. I must tell you there they did fantastic. My 3k USD account reach to USD 750000 in about 1 month. I was quite impressed and gave my USD 1000 account to them to manage. They charged an upfront fee of USD 2000 for copy trading. Guys that was my mistake. Very poor performance, like really shoddy. They kept on making losses, every day. Sad part is they would keep on showing on their you tube channels that they have made millions in one day and if you are not taking the service you are missing everything in life.

Please don't fall into the trap. They won't refund you the service cost paid even.

Last night only i had to change my password because i traded better than them. I was making profits everyday in the account and whatever i made they lost.

Don't get impressed by the post on their Telegrams and You tubes.
1 trader has found this review helpful

Service use: Live Length of use: 0-3 Months
I just paid $500 on top of my investment , this was a one time deposit before they release my profit, they said I've never made the payment and that there is no return. I lost that money. i have all the screenshots and conversations, please stay away from them!!!
P
Pankavee Areewong
Thailand, Thailand,
Jan 29, 2020,
Registered user

Service use: Live Length of use: 0-3 Months
I have started as a client with Forex Trade one day for 15 days. I now make more than 10% profit by using copy trades. Which has a fee, open a $ 2500 demo to see trades and results Summary, make real profits Therefore pay an additional $ 2500 fee to use a real account. To contact, you must use patience. Because traders have to look at the trading system and draw conclusions It may be a bit slow to answer questions. But many questions, you should be able to see what they post for free, whether that works Then apply. Lastly, thanks to Forex Trade One. That is dedicated to trading and creating profits for clients. God Bless the Forex Trade One To be happy and healthy forever.

Service use: Live Length of use: 3-6 Months
Joined their copytrade service. They trade yes, but it will take a veeeery long time to make back the initial payment of $2500 the way they trade. What they show on their telegram feed and other places is NOT what you get. Lack of communication, lack of strategy, lack of everything. Stay away!
Sort by:
Posting Date Rating
Show:
5 10 15 50
Page 1 of 4