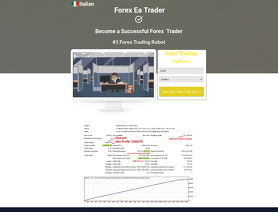 Hi Support, I Live in Sydney Australia & I receive at least 3 emails a week to Sign up with your EA, I have been using EA s for a few years now & currently running Robotron with a Sydney based Broker, I am Not Impressed due to Minimal trading & paid a Hefty Purchase price & been running for 3 months and it has Not paid for its self todate. I am Looking into your offer, I find it Strange the Brokers you work with Pay for & Run your EA on their platform, I Know they make their money from Spreads etc, To Market your EA in Australia & to Obtain a Potentionally Huge Market, I would Suggest Putting your Money where your mouth is, No Offense Intended, Open up your Robot & Fund it with the minimum amount In My Name & when you Have Made Back your Money Withdraw Your Funds Back to Yourself & I Know that 1/ Trust will be Proven & 2/ I Will Promote Your Ea to the Many Traders I Know & As The Marketing World Knows, Word of Mouth along With Media Marketing in This Country Goes a Long Way, I Have Given You Food for Thought Regards Steve Shaw from Sydney Australia.

Service use: Live
After loosing allot of money on the Forex market through so called experts, I was very skeptical to trust Forex EA-Trader . I was in for a surprise because within 3 months I have doubled my money and I do not even have to have any knowledge about trading! If you have a problem it is sorted out also very quick. I can really recommend Forex-EA Trader to anyone.
C
Chris Ledsam
Portssmouth, United Kingdom,
Dec 29, 2020,
Guest

Service use: Live Length of use: 0-3 Months
A Set and Forget Robot.

Set up on 3 Currency pairs and 15 minute Timeframe.

That is good enough for me.

I will watch and wait.

Reply by ForexEaTrader submitted Jan 5, 2021:
Thanks dear for your comment
We are happy to hear that you enjoy it!
S
Someone that know
Tel Aviv, Israel,
Nov 14, 2020,
Registered user

Read This and Understadn what this SCAM! compny does!

Service use: Other
So this is the pure true

They make money for any position the robot open- they get more then 30% of the spread back from AVA TRADE
There is a good chance they also get 50% of the loss from AVA TRADE as a marketing pay (AVA will never admit this)
Anyway, the robot builds like this:

He close profit when the market goes with him and open again to make more spreads (more income to forex ea trader)
When he got loss they call you and ask to add more money!
They know that 100% of you will lose with them bad system.
Ava Trade will never cover these trades because they know you gonna lose
so for Ava its a pure profit.

As idiot you are as good it for them, that it.
This Robot is very very bad for the investor and very good for the Casino (AVA)

This is a pure Scam, Regulator should look at all the accounts and give AVA a fine!
If they see 1000 clients lose money with this Robot they need to stop letting "FOREX EA TRADER" work with them, but hey its free money.

There is a big chance that FOREX EA TRADER gets 50% of the loss from AVA TRADE.

AVA TRADE NOT ECN OR STP THEY MARKET MAKER WHO WANTS THE TRADER TO LOSS!

FOREX EA TRADER BUILD A ROBOT THAT MAKES SPREADS AND LOSS ALL ACCOUNTS! very easy for them to call you and ask to add more.

I want to see the Owner and CEO of "FOREX EA TRADER" or AVA TRADE owner and CEO put money on that Robot, lol they will never do it!

Forex Peace Army must add this company as a scammer!
Also, I am guessing Ava use the British Island regulation for all these accounts

I am a pro that works on trading companies for more than 20 years and not wants to tell about myself, I am not sure how this forex ea trader gets to my Telegram, I look at them robot for many months (I didn't invest 1$) I am read here and there and see what they publish on them Telegram group, this is a pure scam I am telling you.
They got a call center to call and make you lose more and more!
ask for more money all the time

1. We dont work with AVA Trade.
2. We dont accept clients from Israel.
3. Forex EA Trader works only on Forex. So I dont know what Casino you are talking about.
4. The review you left cant be counted as genuine as all the information you wrote before is fake. You didn`t even leave your real name or account number, what is against the Terms and Conditions of FPA.

wow i would never believed what i am seeing

Service use: Live Length of use: 0-3 Months
I have used the robot for about 5 weeks 503 dollars to start and now is 470 dollars more I cant believe you can you can double you money by leaving your computer on thank you Forex EA i would have never believed this could be true the robot takes care of everything its exciting to see what it has done in a day

Reply by ForexEaTrader submitted Dec 2, 2020:
Hello Mr Ratty,
Thanks for you review. We are happy to hear that you enjoy using our Robot.
A
asrgr
Manchester, United Kingdom,
Feb 17, 2020,
Registered user

Simply does not work

Service use: Live Length of use: 6-12 Months
I opened an account with AvaTrade who are FCA regulated in the UK and were recommended by Forex EA. Setup went great and Forex EA support even remoted onto my VPS (via my desktop) to check settings of the robot, which was excellent service.

I opened an account with Forex EA supports recommended minimum amount - £200, which seemed low, however that was their recommendation.

Two things struck me with this robot - 1. It does not use a stop loss, although it would be possible for the robot to manually monitor the trades itself and close when a level is hit; and 2. It keeps trades open over a weekend, so being vulnerable to weekend news.

My experience is the same as everyone else - the robot closes winning trades after around 11 pips, but keep losers open and appear to keep them open indefinitely. It also closes a winning trade but then almost immediately opens another trade in the same direction... so you pay the spread multiple times.

I started the robot on a live account on 8th July 2019 and by 5th August 2019 it was running low on margin with losing trades open and getting bigger and bigger. The robot was unable to open any more trades, I contacted Forex EA support who advise I needed to place another £100 into the account.... against my better judgement I did.

There were some small wins but by 9th Jan 2020 all the margin was used again because it kept the losing trades open. On contacting Forex EA for their opinion, they first asked me to call AvaTrade?!! After asking them why I needed to contact the broker, when it was the robot making the buy/sell decisions, they asked for a full account history and they said they would get back to me, which they never did. I manually closed the losing positions on 15th Jan.

win or lose they won't care

Service use: Live Length of use: 0-3 Months
Hello to all let's be honest here this free EA and is free for one reason just to add customers to brokers yes you have to open an account with there broker to get a 12 month license were by the EA owners receive a percentage of your account win or loss they make money and won't care either way remember there is no such thing as a free lunch its just a marketing ploy to get you in even if you stop using it they make money on every trade you make on that account forever or until you go bust
N
Ntrade
Copenhagen, Denmark,
Aug 2, 2019,
Registered user

It has to be called a scam

Service use: Live Length of use: 0-3 Months
Yes the EA made profit from day one. Small wins all the time. After six weeks it had made almost 100%. BUT THE PROBLEM IS: It never takes a loss. So the losers get bigger and bigger, and the swaps keep growing. Even if it moves in your direction and makes it winning trades, it would not cover the swaps. After four weeks it was running with 80-100% drawdown. I asked support if this was normal, and they replied that it was normal and the solution was to add more money to the trading account. I didn't want to lose more money, so I didn't and after six weeks it blew the account. 300 euro out the window. Stay away folks!!!

I am very sorry to hear that , can you contact our support and give more information , like what are the pairs you run the robot on , and on what lot sizes , after that we will be able to check and help.

I have 13 years of Forex experience

Service use: Live Length of use: 0-3 Months
I have bought this EA and have been trading for 2 months LIVE on the Tradefred platform with it. It does not produce the results that the advertiser claim. The problem is that it produces bigger and bigger numbers of open trades (supposedly hedging). So, whereas one's balance slowly grows, it is outgrown by the negative open trades. Not recommended.
1 trader has found this review helpful

We asked from you number of time's to send us you trading account statement in order to check if you set the robot is the right way, but you refused to do so. some time client's set the robot not by the guide we provided and therefore they think the robot is not functioning properly.

Our company has thousands of happy customers

Forex EA Trader not quite a scam but needs refining.

Ive been running the robot for a couple of weeks now and yes when you look at the balance on the account it is very impressive. Currently standing at £3955 on a £1800 starting account. However with a -£2275 on outstanding trades it makes slightly different reading.

I queried the lack of Stop loss use when I first started the robot and was told its not a problem and that if I implemented one it would affect the running of the robot.

The system uses grids of buys and sells, which in itself is not a bad idea. But you are left with losing trades that were taken at the extremes of the current price movement. The swap values on these are greater than the profit that would be made if the trades closed normally.

When I queried the length of the trades etc, all I got was abuse for "overtrading" my account. They asked who told me to trade EURUSD and EURCHF at 0.2 lotsize. When I told them it was my decision and pointed out it was GBP and not USD in my account it went very quiet and Ive heard nothing since.

Its easy to see how their marketing shows the steady growth of an account, because there are no losses ever taken.
1 trader has found this review helpful
Sort by:
Posting Date Rating
Show:
5 10 15 50
Page 1 of 2