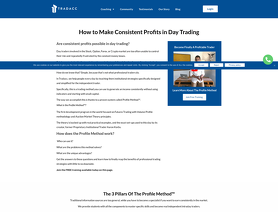 Service use: Live Length of use: 0-3 Months
I signed up for this company after reading he was a Volume Profile Expert. IT was $47.00 to receive a sort of introductory lesson called "Volume Profile Formula" with several bonuses.

My first problem was the fee. It went from $47.00 to $48.41. The bank statement showed an extra $1.41 charge for an "International Fee Assessment" to London. Why a company is outsourcing so the customer has an extra charge is confusing . That being said, each product I sign up for in the future would also collect a "fee" so the price was never really the price stated.

Nevertheless, when you go into the website there a re a multitude of other offers they want you to think about. One offered two payments if you wanted. It seemed like a marketing haven.

I began to watch the videos. But before I got half way into the videos (more marketing) I received a phone call from a salesman who wanted to set up an appointment.

In the meantime he asked if I had any questions. I sort of complained that the "bonus" videos were very generic because they went over the "how to" get set up in TradingView. I was more interested in Volume Profile indicator and how to use it.

During the regular video sessions I was extremely disappointed because they were more like showing off what I call "trophy trades" rather than training someone new to the Volume indicator. Well over an hour of why he took such and such trade. When he got to the more "meat and potatoes" video, it was under fifteen minutes.

I never watched any "formula" and it really seemed like he was holding back in order to get you to pay for more videos. He did the videos using Sierra Charts. He showed the settings he used for the indicator, which didnt help me because I use a different platform.

Each day I received a webinar nvite and the most recent was titled "Funding Account Challenge in which it begins with "Let's get funded!"

As I indicated to the salesman, it doesnt do any good to get funded if you dont know how to use the indicator to pass the funding.

I sent an email to support and she wrote
"As an alternative option, would you be interested in getting access to our Live Trading Showcase ($37 standard price) for FREE instead?
Let us know what you prefer.""

But how could it be free if they if I was charged the initial $47.00? So I responded asking if the replacement videos help use the Volume Profile for someone who has never used it? I never heard back.

However, after thinking on it for a few hours I sent an email asking for a refund. As I stated to her, it wasnt fair to ask her to comment on the substance of the videos if she had never watched them.