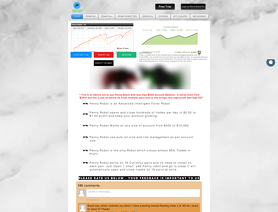 Join live discussion of PennyRobot.com on our forum

These people must never be trusted and never be allowed to ruin the lives of any further people by cheating them from their hard earned money. They tell encouraging points about their EAs' performance and lure people in the group. Once people sign up, you then begin to see their true colour. Within a few weeks, you will begin seeing your money disappear with huge losses. If you even questions why is the EAs not performing, or where is the profits you promissed, you simply get banned from the group.

Initially I was genieunly trying to help Neel, as I found him to be really honest.
He mentioned to be about being homeless and with hard work and devotation, he managed to get to where he is now. Once I joined the group, I met Stacey Colins who was also in contact with Neel. We used to discuss about the errors in his website, his texts etc and Stacey thought about chatting to Neel and see if we could help in the Administration side. As we both really wanted to help him. I advised Stacey on the Admin, Business side of things and she took note of all that. She then became close with Neel and after a few days, told me that we will get a salary by helping him by monitoring the room, responding to members etc.
He then asked her to build a team who would control and look after PennyRobot's interests and would pay them as an employee. Once the team was set up, she immediately began distancing with me and told me that she was Neel's Personal Assistant and did not want another support. So, in another way, only she was the paid employee. Others were also recruited to support them.
During this time, trades was getting from bad to worse, when questioned we could get rude responses. Even Stacey used to question Penny Robot to me and did not wanted to invest any more of her own money. She wanted other members to test the various EAs initially before she got in. When I began raising points against Penny Robot (Neel), her attitude towards me began to grow colder and began distancing herself. However, she would continue asking questions, my opinions and I then I suppose, would report it to Neel. Basically, she was trying to sell herself out and was talki me, which eventually led me leaving Pennyrobot. I did not want to be part of an dishonest team and I regretted that I was so naive to
have joined them in the first place. There were other members who chatted to me about Penny Robot on a regular basis and would also question about the EAs. I however, found out that they were in fact directed by Stacey to extract information from me.

In my personal opinion Stacey, although as bad as the other two, she herself will be chucked out in due course by the two Neel (Rohan in FB) and HT Hadrian (Hiteshkumar), the two thugs. They will use and abuse her and one soon, she will also be thrown out to the dogs. Your days are numbered Stacey dear!!!

Oct 2, 2019 - 5 Stars There is no doubt that Penny EAs are the best in the world. The customer service is fantastic. It is not just the managements but the whole team help one another, especially the new comers to integrate and become comfortable.

There are scam EA providers, who charge huge sums for their products. However, Penny EAs are affordable by anyone in this world, no matter where.

I personally give a 100% rating to Penny products and the whole team. Well done all!

Sep 17, 2019 - 5 Stars In the many years of Trading and testing many different EAs, Penny Robot has topped it all from day one. I’ve been very impressed with the consistent profits it has been delivering.
The support has been excellent, despite being a one man army managing the business! I’m sticking with Penny now. A very happy customer. Well done Penny! I’ve read many negative reviews on Penny, which is NOT true. They should comply with the instructions, maintain the minimal requirements and NOT interfere with the Bot. Just leave the bloody Bot alone and let it deliver! Simple!

I have purchased stupidly every version of EA's Penny had to offer for a single upfront cost. I'm expecting a response from their admin team who always have a something to say and if they don't like what you have to say in their forums they will ban and remove you. I can only confirm my own experiences. All EA's have ultimately blow every account without any management as promised from Penny basic to Penny Pro (Penny Pro was was the same as Greed and cancelled 2 months after purchase), but the best scams are Bitcoin Scalper and their banking system. Bitcoin Scalper was $450.00 to buy with the promise of daily returns which i last got a return of in Nov 19 and to the total value of £$200, losing $250 for me a making $250 for Penny . The banking system i managed to avoid but know lots of people who never get the returns promised.

I'm sure Penny will respond with the "i'm lying", "its working" blah, blah but only Penny have something to gain.

These people appear at first to be honest. They sell Ea's that don't work but I'm not even complaining about that. They sold me a bit coin scalper that was supposed to produce between $20 to $60 a day in profit. The first month it did give between $10 to $15 per day which I was ok with. But this is just Smoke and Mirrors. The company paid this out to appear honest. The owner Hiteshkumar Patel also capped the sales at 150 to make it appear again like there honest. But they were preparing us for the big scam "Auto trader" He promised if we deposit with him he would produce 10% a week. I deposited $1000 with Auto trader and $450 with bitcoin scalper. By the time we deposited in Auto trader the $10 to $15 payments from the Bitcoin Scalper have stopped. When it was time to take withdrawals no money was sent. However a few received pay out but again that's just to make it honest. And the people who did get paid did not get there original capital back they just got the profits from that month. So next month I'm sure those people will not get paid out. FBI in USA notified . The owner of the website lives in Louisville Kentucky.
1 trader has found this review helpful

I am using Penny Robot Basic for almost 2weeks with depositing $1,000 and the guys who recommend me Is Rohan Pa in Facebook that said this EA wont blow the trading account it come with tight SL so no worry but at the end it burst my trading account and i am asking why he said my trading account equity is not enough, what the stupid feedback from them! And they will blocked u if asking much! TOTALLY SCAM!! Watch out!!!
3 traders have found this review helpful

i buy btc scalper with a promise of good result with a daily 20-40$, its cost 410eur and after 1 month i recover 130eur but its 2 week i don't receive nothing from this ea. if u ask info they just block you.

its just a scam. don't waste your money
2 traders have found this review helpful

Realistic expectation from Penny!
I stumbled upon Penny quite a while ago and after doing all the research I have tested running the ea with live account.
The ea did give me very good result and even better than what I expected. It is not “get rich quick scheme” but day by day it performs well. Depend on the condition of the market some days it run without order but averagely, I can get 50-100+$ a week. My account can grow from 145 – 500$.
You can also choose to run Penny low dd fist to build up you account with low draw down then you can move to high dd. The latest update Ea also let you set the stop loss and take profit.
The support is very great and helpful. The ea keep updating to keep the best performance.
I have tried many ea before but since I run Penny ea, I stop all other ea. Really recommend for all!!

Conclusion: The EA is works only in "Pingpong Strategy" and becareful all Penny EA got no stoploss and your account will be blown if market is volatile. Therefore, Penny team all is liar, talk and do is totally different not honest to customer especially the MONEY. They approve comment only in positive and ignore and delete the bad one. Please stay away from them!
2 traders have found this review helpful

They are big scammers

Oct 14, 2019 - 1 Star The robot blown 2 accounts there is no SL and martingale robot stay away from this also the admin Neel he's not honest he's a big big lier BIGGGGGGG
SCAMMMERRRR
HE JUST TALK SAID CLOSE THE POSITIONS MANUALLY LOOOOOL
BIG SCAMMER
3 traders have found this review helpful

After trying everything under the sun, here are the main reasons I'm running Penny Robot EA live:
• No more staring at charts, paralyzed by analysis, or EAs that only perform in demo.
• The always in the market, averaging your entry position, is how the BIG boys play. I want to be in harmony with how the market actually works for smart money.
• They offer enough EA options to fit my risk tolerance.
• Great community of users helping each other on Riot IM and sharing REAL profit results.
• The Penny Team is also in the chat for support and being more transparent then anywhere you'll find.


Started recently with the Greed EA and was up 56% in one week with less than 14% DD. So, never looking back….

Hope this helps,
PipsofFury
1 trader has found this review helpful

Penny Robot is the best EA I have come across, not only do we make great profits but the EA prices are very reasonable and 24/7 support is great. There's always someone around should we have any quetions or need help. There's also a chat room where all the penny users chat with eachother which is good for learning and to have fun while watching the bot trade.

Oct 2, 2019 - 5 Stars I have been using Penny Robot for just over a month and have nothing but love for this EA! Profits are unreal and the support is amazing. Recommend to anyone 100%

Sep 9, 2019 - 5 Stars Excellent bot.... does exactly what it says... its making profits as i write this... customer service is great and we have a great little team going in the penny robot chatroom which makes it a lot of fun
1 trader has found this review helpful

Per FPA policy, the rating on this review has been set to Zero stars.
Sort by:
Show: