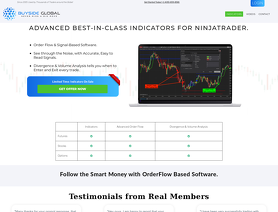 Does NOT accommodate Daily, Weekly or Monthly Forex

Service use: Live Length of use: 0-3 Months
I found out about this company through the NinjaTrader Webinars, where NinjaTrader introduces vendors who build indicators for their platform.

When I watched this company give their spiel, I specifically asked them if this indicator would work for Forex. I was told yes, it works with everything, on ALL time-frames. (All means ALL right?) I subscribed to the one month discount of $97.00 with the agreement to pay $147.00 each month afterwards.

I tried continuously to make the indicator work for Forex swing charts, but it would not work. Specifically, the BGBuySellZone indicator. On the first day of visiting their chat room, I felt out of the loop. I was waiting for a Forex example or a Forex trade. After seeing they were only focusing on Futures, I asked the moderator about Forex. I was told "we don't trade Forex in here." That was discouraging because they really pushed the chat rooms in the webinar and made it sound like everything was traded.

The moderator, after all was said and done via emails, did tell me he would hook me up with another Forex trader, but that never happened.

I contacted BuySideGlobal and they responded. But it began with the blame game. Always blame the trader first and then work from there. "Can you make sure you are running the latest version of NT8." I was, but the indicator would not function.

Next email he responded with;
"I will have our other partner "-" send you a new license key." They sent another key, but nothing changed. Then I was told to watch the instructional videos. Again, I told him nothing was addressing specifically, the Forex Swing trading.

I was told to change the data series session template. I did that and nothing happened. He responded with "Let me create a new video for you that will help show you exactly how to get setup and going. Give me a couple of hours. What timeframe do you normally trade and what instruments?" Daily, daily daily!!!

I want to reiterate to the reader that I told him Forex/Swing trading. NOT, 60 or 240 charts. I watched the video he sent, but it did NOT cover Swing trading. Only short term.

I sent another email advising him of the problems. Again, he sent another video saying;
"Please see my new video below. This video should detail the settings many of our top swing traders are using. Again, some of it is a personal preference so we suggest trying out different timeframes for each of your instruments and see which one suits your style."

This was a long drawn out process because it appeared he was not on the same page or he was side-stepping my issues. He would not address the indicator working on a Daily chart. He then said;
"I'm not sure you watched all the videos as it shows exactly what you are seeing on your chart so please watch them."

But I DID! I did watch them. It was finally after a dozen emails that he admitted,
"The BGBuySellZone will only work with US Equities RTH and not a 24 hour timeframe. Again, please watch the videos on this indicator."

Now we were getting somewhere. "Not a 24 hour timeframe". In other words, not a "Daily" time-frame. The cat was out of the bag. Finally, I sort of got him to admit that the BGBuySellZone indicator did not work on a Daily chart. Why did he take me through this long, drawn out process? Because the indicator DOES NOT work with Daily, Weekly or Monthly Forex.

So I asked him if they would consider a discount because I would not be able to use all of the indicators. I mean, isn't that fair? The whole purpose of the monthly payment was that they showed it in their presentation and said it worked for Forex.

The BGBuySellZone indicator appeared to help with trend, stop and targets. One of my greatest problems. This is why I wanted it to work on the longer timeframe charts.

I was told;
"For a discount, I’ll refer you to so and so. We will see what we can do about getting you together with Forex traders. I can also create a quick video for you showing the basics of swing trading using our software for chart tomes of 60, 120 and 240 minutes".

Please note he said he would talk to so and so about reducing the monthly price, and also said he would see if he could get me together with other Forex traders. Neither happened. I never heard back.

But what also bothered me in his response was his willingness to put together a video that showed chart times of 60, 120 and 240. But, that was NOT what I asked for. I wanted Daily and Weekly. Why was he so hell bent on having me trade smaller time frames? Again, because the indicator did not work with higher timeframes. But the webinar said it did. I told him I would take whatever he would give, but I was in trades for a week. His response?
"I will go over the daily charts as well."

After over 22 emails, I never heard back from him. I never received another video in how to trade Daily charts using their indicator.

I took silence that he would not negotiate the monthly payment. I get that. That's his prerogative. But I don't think it fair that he charge me for a bundle of indicators, and I don't get to use (probably the most important for me) the BGBuySellZone indicator because I trade Forex on the Daily charts. The one indicator that I was sold on in the NinjaTrader Presentation.

When they had their next BuySide Global Webinar, I attended and asked for help with the Forex Daily. I was told this was"not the place to discuss it". What did I hear? "Just go away."

It is true the indicators may work on Forex. But, they, BuySide Global, misrepresented the time frames. They are used for shorter time frames only. They will not accommodate swing traders. Why wouldn't they just come right out and say so?

I had these indicators almost 2 weeks and never made a dime. The chat room boasted they made Futures traders money, but I was not included.

If you trade Forex, at this time, this indicator does not work on a Daily, Weekly or Monthly time frame.
Sort by:
Posting Date Rating
Show:
5 10 15 50