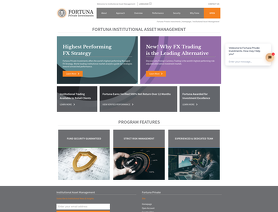 Join live discussion of FortunaPrivate.com on our forum

Total scam and liars , lost all my account using this scam , threatened by them with legal action if didn’t remove my reviews on trust pilot , in drawdown from day 1 u til now the account totally lost , I can prove with my statement

This is a complete scam which uses underhand procedures to show positive results, while gambling with the client funds & ultimately blowing the client accounts.
I started with an initial investment amount of $3000 and they lost the entire amount as my capital reduced to $12 in one month. And when I asked them for an explanation, this is was their reply -

It would seem that you don't understand speculative intraday trading. You opened an account with an ultra-high risk trading methodology which has earned total compound returns of +1,600% since inception in mid-2018.
You signed and acknowledged a number of industry-standard Risk Disclosures which indicated that entire loss of capital is possible when participating in this type of high-risk trading. More importantly, any prudent, experienced, and responsible investor understands that these types of returns come with commensurate risk of capital.
Although it is rare, when enduring unprecedented or record-setting market turbulence such as that which we witnessed last week, it is entirely normal to experience this type of loss on a small micro account of only $3,000 USD without having undertaken a very standard and common addition of margin. Margin calls are an industry-standard process and something prudent investors recognize is necessary from time to time if they wish to trade through treacherous conditions under high risk and aggressive trading algorithms.

I may not be a professional trader but know enough of trading to understand that they are making money by using the client funds. The aim of a good ‘Money Manager’ is to ensure the safety of client funds, but these people ensure their own profits & client funds be damned.
I had been keeping a track of the daily trading done by them & this is what I could infer.
They first add a bonus to the capital, which has the condition that you cannot withdraw the profits till a large volume of trading has been done in the account. This ensures that the client cannot withdraw the funds in the initial months, which gives them enough time to go through their process.
When they start trading, they open multiple positions without any stop loss levels or target levels. Subsequently most of the open positions turn negative since there is no stop. They would not close certain positions even when they were positive but would instead open opposite trades on the same currency.
They only took tiny profits in some positions, and I mean tiny…to the tune of $2 to $3 per trade. This makes the account grow everyday by small amounts, which is done mainly to maintain their track record as verified on Myfxbook etc.
But at the same time, the negative value of open positions keeps growing and reaches to almost 70-80% of the trading capital.
As an example, after about 20 days of trading in my account, the closed profit was $4000, and this was including the bonus amount. But the open positions were at (-) $3700.
So this growth of capital of $4000 from $3000 was of no use to me, as I could not withdraw any part till the negative positions were squared off.
But for them, it was an excellent track record since it showed a profit of almost 40%....as the open positions do not reflect in the profit statements.
And I would wonder why they traded this way, till I spoke to someone from the broker Multibank Group.
Like every broker, it seems that Fortuna Investments has an IB arrangement wherein Multibank pays a commission for every client that Fortuna brings, and Fortuna gets a commission for every trade in the client account.
Which is why Fortuna is interested in just opening more positions in every client account, so they can simply collect the commissions from the broker. This is also called as ‘churning the account’ and thus the profit or loss in the clients account does not matter.
And inevitably, the number of negative open positions will exceed the margin at some point, and the broker will close the client account as there is no capital left…..but by then Fortuna has made the commissions on all these trades taken.
Just for information, they had taken 447 trades in my account in a period of one month.
Unfortunately, the agreement that was signed, was very basic & would not hold them accountable for their actions.
But since they have a location in Alberta, Canada, I have approached the Regulatory body “Alberta Securities Commission” to file a complaint for misrepresentation of facts.
The website of Fortuna Private clearly mentions the program features as ‘Fund Security Guaranteed” and ‘Strict Risk Management”, and I have saved my entire trading statements, to prove otherwise.

Don't give your money to them

I urge you not to trust them. After investing the requested minimum of 3000 € they give the same amount on top as bonus, so your starting capital is actually 6000 €. Of course, this bonus cannot be withdrawed and you will be notified that your account will be closed when you lose your own funded 3000 €, that means when your statement is below 3000 € (since you got a bonus of 3000€).

Then Fortuna starts with very aggressive positions, and at the same time buy and sell signals for the same currency, bringing the total loss on my open trades to more than 6000 €.
When I contact a representative (Peyton Murphy, always very friendly) about this, I get this answer:

"Because Fortuna is an aggressively managed account strategy it is customary to maintain open/floating positions which may have a temporary negative value until that point in time which they are realized for positive profits. This is the natural "ebb and flow" of the market."

"It is important to reiterate that these open/floating positions do not represent any form of realized loss. Rather, they are open/floating trades which continue to remain under direct supervisory management to be guided towards neutrally beneficial closure points."

According to him, I still realize profit, because my balance has risen above 6000 €. He seems to forget that my statement (the most important thing) always drops further and further, until this aggressive trading method finally brinds my statement below 3000 € and my account is closed by the broker.
Result : 3000€ lost from 5 May to 13 July !
I can show you the trade logs for this period.
Stay away from them with your money.
Sort by:
Show: