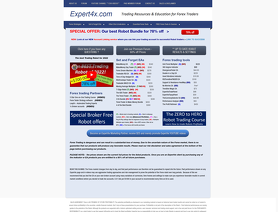 Service use: Live Length of use: over 1 Year
My main complaint (and it's a big one) is that he markets mainly for the USA while he hides that fact that so many of his robots are not compatible with US broker rules like FIFO, or hedging. In all his sales videos on youtube, he mentions how great his latest EA is, and sells his EAs in USD. But, for the past number of years, he will won't mention in his videos that the robot can't be used by US customers. His product web page may state (in fine print) that the robot can't be used to its full functionality if run in the US. But, 10-15 videos on the EA, and no mention of "Hey, you can't use this in the USA."

I had recently subscribed to an EA of his. There was nothing is his many videos, nor the product web page (not even in the fine print) that the EA would not work for US customers. After using it, and seeing some problems with the EA closing trades, I wrote him asking what was wrong with the EA. His response was to tell me to open an off shore account outside the US. (Giving financial advice like that is a lawsuit waiting to happen.) When I replied back that I would not due to safety concerns, and wanted to know if he would update the EA for work with FIFO, he accused me of over leveraging the EA. (The total drawdown on my account was 0.1% for 2 trades of 0.2 lots total. So, no leverage issue. And, the EA had problems closing existing trades (fifo issue) not opening new trades (leverage issue).)

Even one of the moderators, on his forum stated, in the discussion thread stated it wasn't me but rather the EA not working with FIFO rules. Me, I'm out $250.

If Alex clearly stated: "Hey, this EA won't work for US customers." then I would have no problem with him. But, he is purposefully keeping important info from customers until it's too late.
W
Why
why, USA,
Jan 30, 2022,
Guest

Service use: Live Length of use: 6-12 Months
I almost lost all my gains using these EA's. I code and program EA's and decided to try some different ones. Big Mistake . Stay away from these strategies. They are high risk and has very low profit return . The knowledge of the market provided is worth being a part of the forum but stay away from the bots.
D
Dwayne Brown
Texas, USA,
Jul 23, 2021,
Guest

Service use: Demo Length of use: 3-6 Months
I purchased the Grid Trend Multiplier EA (PLUG N PLAY) and also the Money Maker(PLUG N PLAY) I put them on a $3,000 demo account the EA sets the lot size and everything. I lost -$400 the next week from the Money Maker EA. so then I took that EA off hoping the Grid Trend would get my money back and then the Grid Trend Multiplier lost -$200. DO NOT WASTE YOUR MONEY!! The plug in play is supposed to be that you set it and forget it. THAT'S NOT TRUE!! They programmed the EA with a looooong stop loss. If a reversal happens or news hits you your SMOKED!!! That is the downfall of these TRASH EAs!!!

Service use: Live Length of use: 3-6 Months
Purchased the grid trend multiplier and its amazing what it can generate definitely changed my life.
Thank you Alex
1 trader has found this review helpful

Expert4x is the most transparent and helpful forex EA service.

Service use: Other Length of use: Have not used
First of all, if the people complaining that Experts4x is a scam had taken the time to view some of the 100's of free training and trading videos they would have known that trading a great EA in the wrong market will not make you any money.
You can't just plug a trending EA into a sideways market and make money.

Now I don't know if Expert4X trades with live money or if he only makes his money selling EA's and training, and I don't really care. What I do know is that there are tons of verifiable accounts running these EA's on MyFXBook.

Support Desk is top notch and very fast to respond. This company is probably the most transparent and helpful forex company I have worked with.
E
EA Trader1962
SOUTH AFRICA, South Africa,
Oct 21, 2020,
Registered user

Service use: Live Length of use: 3-6 Months
Sonia Amachree and Murray Anderson run signal channels. The channels keep on changing names so it is difficult to keep track
1. They supply signals and in between they ask people to invest. They promise 100 dollar and 5 days later 1000 dollar
2. They offer signals via telegram, it means they can delete wrong trades without a trace.
3. They follow the typical scamming procedures. Every day they come up with some reasons to try and get more money .
4. They run their scams on Facebook, Instagram, Telegram.
5. I recorded videos of all which can be viewed if so requested by anyone.

Sep 28, 2020 - 1 Star I subscribed to H4 FX VIP SIGNALS. At the end of each week they send out a summary report and it is clear that these guys are not trustworthy.
1. I make use of a telegram signal copier software. Each trade gets copied, not only some of them.
2. I see trades that hit the stoploss (GBPNZD -23 SEPT - 12H51) yet the weekly report does not report those losses.
3. Further, those trades also get deleted on the feed, thus deleting all traces of such trade.
4. I sent them a message. Instead of investigating the entire issue they just answer
"Please sir cross check it. We always update follow our channel. Thank you for understanding."

Stay clear of these guys

1.Alex puts a lot of effort into his videos. They are very informative.
2. His EA's are of high quality but just seem to be not profitable
3. He is no scammer.
4. He supports two types of forum users: He has the paying forum members and the non-paying members. The paying members have a huge advantage but it comes at a price.
5. Assistance with setting up the EA's comes with an additional fee. This should be part and parcel with the purchase price.
6. None of the EA results can be verified unless you are a paying forum member.
7. Overall I found the drawdowns to be huge and very risky.

In short, thinks twice. I have not been successful with any of his EA's but hope to one day strike it gold with his EA's. Hoping to get some feedback from "The New 7-Edge Trading Robot" users.

I will only invest in that robot, if it comes with a 14 money back gurantee, although it will take me less then a day to be able to see if that robot will be the one.
1 trader has found this review helpful

Service use: Demo Length of use: over 1 Year
I came across expert4x.com in 2019 and was immediately attracted by the simplicity and openness of Alex when discussing or teaching forex & EAs. I currently use two of their EAs namely: Grid Trend Multiplier (GTM) & Moving Average Multiplier (MAM) which so far have not failed my expectations. Expert4x.com provided me with free educational contents beyond the EAs which changed my outlook / mindset about forex. Until I came across expert4x.com I have always believed that EAs are black box configurations, curve fitted by the developer to achieve a marketable result that is impracticable. But Alex opened me up to how EAs work with simple practicable strategies and settings optimization in order to get the best out of any EA.
Alex thank you for your contribution to the forex community and most importantly my trading progress. Keep up the good work.
1 trader has found this review helpful
S
ScammedByExpert4x
Nevada, USA,
Jul 9, 2019,
Guest

EAs are not tested with real money...enough said

Service use: Demo Length of use: over 1 Year
I asked if they test their ea’s with a live account...Alex was at least honest to admit that they do not test their ea’s with live money, only demos. I’ve been on their forum and I’ve literally found no one who has made any money with the Make Money EA they sell. All of the fxblue accounts are all wiped out.

They are just a scammer website. I lost way too much money buying their trash ea’s.

If a ea seller tells you that they don’t trade a live account with their ea.....run from them.
5 traders have found this review helpful

What is said to be a scam, is actually a good deal for sincere traders!

There seems to be some misconceptions here, I will explain.
The ea's sold by Expert4x all work as advertised. And that is confirmed by the various contest results posted on FXBlue site.
I own a few of the EA's sold by this site and they are money makers as promised.
When got the first couple I had a lot of trouble because I did not grasp the concept. The videos taught me a lot, Alex is putting new explanatory videos on the site every week.
I ask questions..... in the forum and get a reply. And I follow closely his instructions as to how to optimize the EA's.
On many pages on the site it says no refunds..... but there is no limit as to the number of questions you can ask in the forum.
It is easy to label something a scam instead of putting in the hours required to make it work. It is clear on most pages that the ea has to be adjusted to the individual broker and the specific currency pair. There are example set files. No one helps their customers as much as Expert4x.

Please, before calling people names, be sure that you have done your part as a professional.
6 traders have found this review helpful
T
Trader0001
Singapore,
Sep 29, 2018,
Registered user

expert4x are professional scammer. bought their EA lost a lot of money. ask for refund and they refused. according to their youtube video they claim ea are profitable which is completely false. Alex is a good talker but he is a conman/ professional scammer selling lies on youtube to take advantage of rookie. hope someone will shut them down for good.
Sort by:
Posting Date Rating
Show:
5 10 15 50
Page 1 of 4

Expert4X is a forex trading software company that sells a number of indicators, expert advisors, and trading courses.

Unbiased traders reviews on ForexPeaceArmy is the best way to answer if Expert4X is a good software seller. https://www.forexpeacearmy.com/forex-reviews/3919/expert4x-trading-robots

Please come back often as reviews get updated and added by users from time to time.