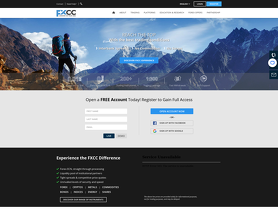 Join live discussion of FXCC.com on our forum

FXCC is a Scam

I started to use FXCC in 2017, it was good before and I even recommended the company to my family and friends. However, the good service was already a history and now its become an absolutely scam. I repeatedly chased FXCC Finance for the withdrawals in June and July but did not receive any response from them at all. To this point, the total withdrawal amount of USD58,137 for my family and my accounts (4 a/c) has already been requested for more than 7 weeks already but still not being processed! This is totally unacceptable and it is extremely irresponsible for FXCC to withhold the withdrawals without any reason. So for the traders who consider to use it, stay away from this scam company. For the victims, please raise complaint to VFSC and CySec, so that these regulatory authorities can impose some pressure to FXCC or even strike off its license to preempt further unjustifiable activities on the side of FXCC.

FXCC is a legitimate company after all.

I wish to add on to my previous review about FXCC on 9 June, 2020. They have finally completed my review on 23 June, 2020 and approve my withdrawl. I still have money in my MT4 account though and I believe there should not be any problems in withdrawing as long as I do not violate their terms of trading. FXCC is a legitimate company after all.

Jun 9, 2020 - 1 Star I have joined FXCC since Feb 2020. I was always apprehensive about the company based on the review on this website. However, I still decided to give it a try as it is still regulated by CySec. However, now I seriously regretted my decision.

I made some money through trading. My trading activities did not involve scalping or hedging, just buying and selling within 1-2 weeks when the trend is in my favour. I made a serious of withdrawls initially and it was fine. However, the latest withdrawl I submitted on 28-May was not processed till today (after 11 calendar days). I contacted their live chat, back office and finance department. Their only response was that it was under review. I asked them how long will the review take, but they simply ignored me and never give me a definite answer. I have since closed down all my open positions (since I found there is no point to continue trading as I cannot withdraw the money!). I still have EUR 11691.61 in my MT4 account 88825208, and this excludes the withdrawl amount of EUR 2207.13 which is still pending for processing. I have since wrote a formal complaint to FXCC and is still pending their reply.

I just found out from the Vanuatu Financial Service License (VFSC) website that FXCC (or Central Clearing) has been struck off from their register since 21-May-2020. Central Clearing is no longer registered with VFSC to provide financial services. Their website still states that the company is regulated by VFSC which is a clear misrepresentation of information.

For all new traders out there, please refrain from joining FXCC. Besides my review, you can check out all other reviews in FPA regarding FXCC. We all face the same issues in withdrawing. Initially, you may be able to withdraw, but sooner or later, they will stop you from withdrawing.

Now This is my final review is Scam all my money is have stolen.

This broker is really scam .

Dec 17, 2019 - 5 Stars This is my second reviews after do trading scalper EA with this broker.
1. If u order manually by mobile sometime have delay or off quote.
Happen on news time or high impact time movement.
2.If you using MT4 on VPS is ok and working find with ur EA don't worry.
All you have from this broker leverage 1:300 and No commission with no swap(everyone not only Muslim)
3. Withdrawing by skrill still fast but not faster need 1 or 2h (Mon-Fri)
sometime need half day.
4.The customer support can contact with live chat or by email not instant but
only a few hour reply back.

I'm recommend to use this broker for scalper EA.
Now my account is nearly $5000

So, this is what happened in the end:
1) After 2 weeks, on Feb 15th, I received the results of my "Compliance Review", wherein it was stated that I had conducted "gross abuse" of my account. As a consequence, my account would be terminated and my balance would be transferred back to me. According to my MT4 platform, my balance was US$109,XXX. There was no explanation of what was the abuse, but I realized I had traded with volumes higher than what was allowed by Terms and Conditions. However, these trades had gone through, and some had even been confirmed in my daily balance confirmation emails. Furthermore, the same Terms and Conditions stated that my account should have been upgraded to a Standard account automatically, which would have had the ability to trade with larger volumes.
2) On the same day, I received a Notice of Termination, in which they said my remaining balance was only $12,XXX. THEY PROVIDED NO DETAILED STATEMENT, but I worked out that they had just erased all my trades with volumes greater than 10 lots. INTERESTINGLY, I HAD HAD BLOWN ACCOUNTS WHERE I TRADED LARGER VOLUMES, BUT SINCE I LOST THEY DIDN'T SEEM TO CARE. FURTHERMORE, THEY ARE AN STP/ECN BROKER, SO MY TRADES GO DIRECTLY TO THE LIQUIDITY PROVIDERS, WHICH MEANS THEY KEPT MY PROFITS UNDER THE COVER OF TERMS AND CONDITIONS THEY SHOULD HAVE HAD IMPLEMENTED IN SOFTWARE. I wrote an email expressing this, but got no response.
3) In the same compliance review they asked for an updated Proof of Residence which I provided on Feb 20th. They also threatened me with legal action (lol) for posting my previous review in this forum.
4) Since then I tried to call and email them with no response. I even wrote a formal Complaint Form on MArch 5th. They responded on the LiveChat but only to say they could provide no updates.
5) Only today (March 18th) they responded by email that the US$12,XXX had been transferred "a while ago" (on March 8th, after the date I submitted the formal Complaint). I checked with my bank and it had indeed arrived and was being processed.
6) I still claim they owe me the profits of my trades. I think the fair thing to do would have been to charge me for the Commissions and Swaps that my account type did not have, but the account that allows larger volumes does. IMPORTANT TO NOTE THAT MY ACCOUNT SHOULD HAVE BEEN AUTOMATICALLY UPGRADED WHEN EQUITY ROSE ABOVE US$10K. They conveniently chose not to enforce that part of the agreement.

My conclusion is that FXCC is a convered SCAM. Thay will SCAM a small proportion of their clients, which will keep them afloat in loose regulation environments like Vanuatu and Cyprus. But I was SCAMMED and there is no other name to call it. I have budgeted a large amount of time in the coming months to make sure they do not get a single new deposit.

Feb 6, 2019 - 1 Star I have been with FXCC for more than 3 years. Overall I have deposited more than USD$40.000, and only ever withdrew some minor amounts, since I was always losing. However, 2 weeks ago I finally broke even. I requested a withdrawal for which I never got a response even though I insisted at least 2 more times during the week. Last week I stopped receiving the Daily Confirmation emails, which I didn't really think much about. I ended the week with a balance of USD$109,229 and no open trades. Then, when I logged in to MT4 on Sunday to plan my week, I got an "Account Disabled" notice. I logged into FXCC's website and my account does not appear at all. 4 hours later I got an email from the Compliance Department saying that my account is under Review and that I would be contacted in case I was required to provide documentation and the such. Since then, I have contacted the Compliance and BackOffice Departments, the LiveChat, and requested callbacks, and all I get is the response that they "can't give me anymore information because they don't have it" and that I will be contacted "as soon as possible". I am really starting to feel scammed. How should I proceed?

Seems like FXCC is a scam broker. In december 2018 I've made an account and got the no deposit bonus. I've completed all the requirements, but they've not processed my withdraw. I've sent them a lot of e-mails, and they said the withdraw was being processed. More than one month has passed and they now stopped answering my e-mails. Until I see my money, I recommend that no one deposit on FXCC. There are many other trusted brokers. My account number on FXCC is 88819208.

These are very big scammers

everything is good there EXCEPT withdraw money

everything is good there EXCEPT withdraw money since 7 days, I didn't receive any
and every time talk to customer service in chat they say wait more 3-5 days, they don't know any other word
on email when the subject is withdraw no body reply

waleed abid,
bahawalpup, Pakistan,
Mar 27, 2017,
Guest
this broker is best i have five years experience and i am happy to do trade with fxcc.
these methods are good i take withdraw many times and they are giving me withdraw within 24 hours and fxcc withdraw fee is very low please join all

chris chew,
kuala lumpur, Malaysia,
Jun 1, 2016,
Guest
stay away from this broker......this totally is a scam,my withdrawal was pass over than 10 day,i still haven't see my money back to my account.if you still got fund on this broker please dun withdraw all your fund because they won't give you back that money.this broker only want you keeping with them.once time you join with them they won't let you go.after join if you think want to quit withdraw all the fund they only give you one word that is wait....wait...and keep wait.

do not invest any money into FXCC Broker.
I just had lost all money inside my account.

I had po 1 order but i had cancel it before i sleep.
the next day morning when i wake up. the order was executed and all my money inside account was burst

i had picture and screen shot of all proof.
any one please let me know how to complain their broker so that no more people cheated by them.
I believe its their system open the order by them self and i have proof of photo.

They don wan reply any of my message at all