2017-05-16.  The owner of Secured Options and Inside Option has been arrested.  Charges include aggravated fraud, misrepresentation, false accounting, forgery, extortion and blackmail. CLICK HERE to confirm.

The FPA considers this to be sufficient evidence to confirm that both companies are scams.

June 2016:  There is an FPA Traders Court guilty vote against this company.  They FPA recommends caution dealing with secured optionns unless this issue can be resolved.

Website is down.  Company seems to be out of business.
⭐ Traders Reviews 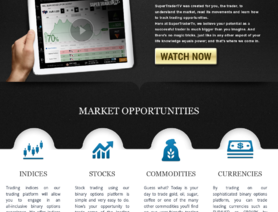 It was not what was advertised

I invested with 'Secured Options last June 2016 and lost my money, couldn't find any help here in Uk with the inept incompetent pretend 'Action Fraud ' squad or FCA , LSE, Consumer organisation or the Gambling Commission as they were not registered with the later! Glad Israel and Canada and the USA have woken up to this Internet Options SCAM at last! Well done you guys! If any body has any idea how I can now proceed to try and get my money back pleas write it down here, TA!

Your article gave me hope Simona Weinglass well done ! can you help the people in UK that have been scammed like me? Be most grateful for any help as I lost all my savings last year in June to them the dreaded 'Secured Options' gang! Told me all deals were covered by insurance therefore no losses wold be incured! What a lie that was, then fell for the 'Bonus' trick whereby one had to put 20x the amount of the bonus back into the future dealings or loose all your money like me, also suffered from terrible admin from these people. Hope they get put in jail for a very long time!
D
denis333
WOLVERHAMPTON, United Kingdom,
Jan 18, 2017,
Registered user

A GANG OF CROOKS OPERATING IN FRONT OF YOU AND GETTING AWAY WITH IT .SHOCKING.

I HAVE BEEN WARNING PEOPLE FOR A LONG TIME ABOUT THIS GANG OF CROOKS AND THEY ARE STILL GETTING AWAY WITH ROBBING PEOPLE. Why cant Forex peace army stop them that is what you are there for.I am sorry i have lost all faith in your organisation total waste of time.

Dec 21, 2016 - 1 Star Warning DO NOT trade with this gang of thieves . There whole system has been set up to rob the public. What i cant understand is how they are getting away with it, surely the police and government are aware of these BASTARDS.

Dec 16, 2016 - 1 Star SENT SECURED OPTIONS £250 WHEN I READ THERE REVIEWS I WAS TOTALY SHOCKED ,THEY ARE GRADE A SCAMERS IF YOU SEND THEM MONEY KISS IT GOODBY,I TRIED TO CANCELL BUT THEY HAVE KEPT MY MONEY.COULD YOU PLEASE HELP ME TO GET MY MONEY BACK. I HAVE REPORTED THESE PEOPLE TO THE LONDON FRAUD SQUAD.

Are you feeling well?  Can you see the rating on top of this page?  Can you see the warning about the Traders Court guilty vote?  You have been a member of the FPA since May of 2015.  That's long enough to know that it takes 3 Guilty cases or some sort of major regulator action for a company to get a Scam Label.

The FPA has done more to warn members about the dangers of binary options than any other forex site on the web.  Didn't you notice all the low ratings, Traders Court cases, and Scam Labels against so many binary companies in the time you have been a member?

You've made complaints in Scam Alerts and posted in other people's case threads, so you should be fully aware of these things.  Why didn't you open a thread in Scam Alerts?  You could have gotten advice from fellow FPA members and might have been able to recover your money.  Why didn't you file your own Traders Court case?  If you had, then Secured Options would need to pay you or would have ended up one step closer to a Scam Label.  This would have made more people aware of the problem and could have saved others from placing money there.  Instead you seem to expect the FPA to take action without following established procedures of offering help in the forums, evaluating evidence and voting.

The FPA does not have artillery.  We also do not have teams of commando accountants to break down the door of companies and do audits.  Do you expect the FPA to order a broker to close down?  Would you expect a scam broker to obey such an order?

The FPA is not the police.  Instead, the FPA relies on members like you to take action to try to help publicize scams and warn their fellow traders inside the FPA and to file complaints with police and regulators.

We would hope that joining in May of 2015 would have given you plenty of time to learn to read the reviews first.  Instead, after complaining in the forums about other binary brokers, your review of December 2016 shows that you deposited with Secure Option before checking the reviews for it.  Why didn't you check the reviews first?

Should we have assigned an FPA member to stand by you and force you to look at reviews before depositing?  Should we have written you a personal message advising you to not deposit with any binary broker?

We have lost all faith in you as a person who cares to take simple actions to protect your own money or to help protect other FPA members.
H
himmelkarolin
Zurich, Switzerland,
Dec 9, 2016,
Registered user

My Experience is great with them

i started trading 5 years back and no i am very well groomed in this field and here is my first review regarding securedoption . i started secured option year back and got good amount from trading which shows positive sign for this company but their might be issue happened with some of guys but i am fine with them. No worries as they withdrawal the cash in few days but its okay for me . More over their services are very professional . i love their knowledge database which is very great and helps to get learn some thing new from trading . i recommend you guys.
A
AC
Vancouver, Canada,
Oct 18, 2016,
Guest

Warning!!! Scam!!!Do not Sign up with securedoptions unless they have paid their traders.

Just today, I cannot login to my account, says wrong password eventhough I have not change the password. I tried to use the forgot password option and they sent me a new one which also didn't work. This happened only today after I requested to withdraw. I have submitted a withdrawal request two weeks ago and only found out that withdrawal was cancelled by them without notifying me of any reason, only found out a week later. Then I resubmitted another withdrawal request and emailed support and accounting department, these is where my account login access was denied. Still hoping to get a response from them.

Securedoptions.com was provided to me when I signed up for NEO2 software.

What actions can we take to get our money back. Thanks!

On 15th Aug I deposited USD 500, i spoke to a lady named Emily Miller. Later that evening, another guy called me, and ask me to deposit another USD 500, I told him why should I put in another 500 when i've just put in. He said there is a an opportunity to grab now about the iPhone 7. I just told him not interested. 2 Hours later another guy named Ben Klein called, introduce himself as a top broker with Securedoptions, saying how much he has made for his clients and how he can do the same thing with me. He ask to do a financial goal check, asking about my credit cards, my houses, etc. Then he mentioned about the 10,000 USD package saying that this package will suit my financial goal if i want to achieve it. I did a skype call with him few days later, and i told him i'm not interested, and i would like to do my own trade using your software under the spot follow. So he pass my details to his colleague, David Fisher, saying this person can handle my type of account which is USD 500..so i said great thats what i wanted. He called me today, talking about the opportunity about iphone again, saying i missed out on it, telling me there is a plan if i deposit 5k USD i will get 3750 cash right now, and if i deposit 10kusd i will get 7500 cash again, trying to entice me with money. I told him i just want to trade with my 500, he then said he doesn't like the way i talk, i offended him, he wants my card details so he can do a check to see if how i deposited my money. Saying my account is a fraud and i'm doing money laundering. What a joke!!

For those who are reading this, DO NOT JOIN securedoptions!
M
Mike
Victoria, Australia,
Aug 27, 2016,
Guest

This company presently hold $140,000 USD of my money they use the term insured trades, at no time have i had a bonus which you have to turn over so many times to withdraw( this is normal in the industry) i used only insured trades, when i when to withdraw funds they refused, with the sum of money involved i am thinking about taking them to court for theft i will see how things go
D
Demi Adley
United Kingdom,
Aug 24, 2016,
Registered user
I have been working with secureoptions for quit some time, they have always put my well being infront and i have no complaints what so ever. I would recommend others to join them

HelloYellow
australia, Australia,
Aug 15, 2016,
Guest
Stay away from these brokers. They will ask you for all your money, they will churn it and leave you with nothing. You do not have control!
M
Moroontrader
UK, United Kingdom,
Jul 30, 2016,
Guest
They took took all of my $16500 through losing trades. Then asked for more money!
My case is almost identical to those listed in this thread. I have written evidence of reassurances that my capital was safe and that the company is regulated. Both of these things turned out not to be true. My account manager gave numerous reassurances that all would end in profit, it did but for Secured Options!
The real breaker was when they put down 6 trades. These trades were for my entire balance and I expressed concern. I called up expressing a concern and my account manager sounded very worried. The next thing I knew my trades were all sold and the account manager moved off the account. I then had contact with a new manager who said he would recover the account. It would cost me 10k and he guaranteed a return of 28K. So on a investment of $16500 +10K they were offering a return of 28k. You don't need advanced Maths skills to see that is a crazy offer.I did not pay the 10k and currently have a balance of $19 on account after an initial investment of $16500.
I have emails, Skype transcripts and I only wish I had recorded the aggressive calls asking for more money.
Please please please do not give this company a single penny, dime or shilling. You will lose your money, be it this week next week or a few months down the line.
Sort by:
Posting Date Rating
Show:
5 10 15 50
Page 1 of 2