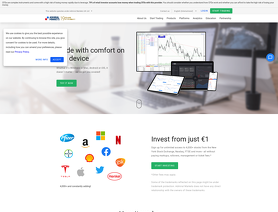 Trade our best spreads of the year! Most companies save their best sales for Black Friday. Not Admiral Markets!

Join live discussion of AdmiralMarkets.com on our forum

Reply by AdmiralMarkets submitted Feb 14, 2021:
Hello there,
The opinion of our customers is important to us and we try to maintain loyalty, but unfortunately, some solutions have to be applied due to the current situation in the global market.
Kind regards, Admiral Markets

Abundant Choices. The best to me.

After having tried dozens of brokers after a decade, I have decided to settle on this broker, mainly because the number of stocks provided by them for trading is insanely numerous (over 3000 around the globe). I am an avid stock trader. The spreads and leverage are also very reasonable.

My only little complaint is that deposits by local banking are not insant, unlike the other brokers.

Reply by AdmiralMarkets submitted Feb 14, 2021:
Hello there,
Thanks for your time and feedback. The opinion of each client is important to us.
Kind regards, Admiral Markets

The brokerage proved to be quite adequate. I wouldn't say that it is really good at everything, but it is comfortable and safe to trade with it.
I liked it very much that it provides quite a lot of analytical content, such as various trading calendars, news, charts and so on. It's good, because I myself use analytics a lot. I think that without analytics, trading becomes a bit incomplete.
I have also been helped several times by the client support from Admiral Markets. It was very useful and fast, so I decided to mention it separately :)

Reply by AdmiralMarkets submitted Jan 5, 2021:
Hello there,
Thanks for your time and feedback. The opinion of each client is important to us.
Kind regards, Admiral Markets

One of my best decisions

Trading with Admiral Markets was one of my best decisions for sure.
It was 4 years ago, I had around $10,000 accumulated on savings account and desire to invest in trading. I was planning to try Admiral Market but my good friend kept convincing me to trade with his brokerage, so I had a long doubts about which one to choose, you know.
On the one hand, my friend's brokerage had Saychelles regulation and no education but offered high leverage
But on the other, Admiral Markets had good reputation but no fixed spreads available
Finally, I chose Admiral Markets and, yeah, I'm trading with variable spreads now (and I don't care). In fact, variable spreads are much thrifty, cause you don't overpay for 'stability'.
So, spread type isn't a problem now. By the way, Admiral Markets had one strong advantage - usefull education, I can say that 90% of my following success was informational background from Admiral markets education, cause I learned the most important trading basics that I'm still using in my everyday trading.

Reply by AdmiralMarkets submitted Jan 5, 2021:
Hello there,
Thanks for your time and feedback.
Best regards, Admiral Markets

I’ve been trading with Admiral Market for two months and my impression of it is quite positive. I favor traditional trading solutions such as MT4 and MT5 and appreciate that the broker offers decent conditions to work with my favorite platforms. For example, on MT4/MT5, I can trade without commission, with variable spreads, starting from 0,5 pips, which suits.
There’s another thing I like here. That’s InvestMT5. I can start trading stocks on this account by investing just one dollar. However, leverage is unavailable in this case, but it enables me to explore the stock market without big risks.

Reply by AdmiralMarkets submitted Jan 5, 2021:
Hello there,
Thanks for your time and feedback. The opinion of each client is important to us.
Best regards, Admiral Markets

I was swindled with $ 3000 through price manipulation on the platform and deliberately hit the stop .. (I will mention the methods of the swindler at the bottom) and my account was dashed 3 times, and every time $ 1,000, knowing that I did not discover their dirty methods until the last time, as I was surprised that I was I open the same trades on a second platform (demo account) and achieve the goal but in admiral it hits the stop ..! I discovered this when I opened the platform once to find that the two deals were in a profit state, and suddenly the balance turned into negative, and in the end the stop was hit, so I immediately set up a screen shot for the platform, and I contacted the company, but I did not find an answer. They just said give us the account number and the phone number for the account manager to call you.

First: Methods of bringing victims and capturing them ...!

1- The large number of advertisements spread on most trading sites, which makes the novice in this field believe that it is a large and respected company (exploitation of the psychological factor)

2- The $ 30 No Deposit Bonus .. Of course, the $ 30 Bonus is nothing! But for the novice, it is considered a big thing, and I am sure 99% of those who register in the company for the bonus lose it within one day or several days .. But in the end this small amount is enough to attract many victims and they have succeeded in causing many ..!

3- Very excellent technical support before deposit ...! After that, if you lose and do not deposit it again, then you are in the trash for them ..!

4- Tempting you to trade continuously in order to obtain certain points (and after collecting a number of points, you are entitled to convert them into a bonus or credit), which encourages you to enter larger lots every time in order to get more points, thus a bigger bonus ..! In the end, your destiny is Margin ..!

5- This is the most dangerous point and the dirtiest way for the company, as the company pays you $ 10 for every lot that any person who registers in the company trades through you ,, i.e. when you open a partnership account (affiliate) on the site, you become an agent of the company and you get a special referral link. Spreading the link Anyone who opens an account in the company through this link, as the agent gets $ 10 for every lot that this person trades with ..!
(Someone of you might say this thing is natural and is present in every company ...!)
I say yes, this thing is natural and is present in every company, but the problem is that the company is manipulating the platform and hitting the questionnaires, which means that the profit of the agent and the company is on your account ..! You lose and they win ..!

6- This partnership is very profitable for the agents (as no other company gives this large amount of $ 10 per lot per person), which makes the agents arrive and roam the trading sites, forums, groups, Facebook and YouTube pages singing and praising the company and its advantages, which makes the trader especially the novice He falls victim to the agent and the company easily ..!

The calamity is that some agents know certainty about these matters and the operations of fraud and manipulation, but nevertheless they continue to defend the company because their profits come from praise and not trading ..! The agent does not need to trade and take risks, but is content to praise on the Internet and bring victims to the company, and he gains by trading victims and losing them ...!

Reply by AdmiralMarkets submitted Jan 5, 2021:
Hello there,
We want to understand the situation and help you. But more detailed information is needed. Please indicate the account number and order numbers for which you have questions (you can send them in a private conversation). Also, include the number you contacted.
Kind Regards, Admiral Markets

As for tier-1 brokerage, Admiral Markets offers two features that I really like:
1. Tight spreads. For All-in cost EUR/USD average monthly spread (August) was 0.7 pips. That's incredibly low, AM competitors charge 1-1.2 pips.
2. Mininimum depo is $200. Now my depo is $5,500 but I've started with minimum depo and AM was one of the few tier-1 brokers to offer such a minimalistic deposit. I appreciate this opportunity to try-before-you-invest-a-lot.

Reply by AdmiralMarkets submitted Jan 5, 2021:
Hello there,
Thanks for your time and feedback.
Best regards, Admiral Markets

I immediately liked working with Admiral Markets. The broker has quite a positive reputation in the market and a lot of positive reviews.
Because I don't trust brokers without a regulator, as there are very different scammers in the network now.
Personally, I didn't find any significant disadvantages in the work of a broker. I liked the fact that it has a lot of analytical content. This is probably what I liked the most about it. Because with a broker you can quickly and easily engage in market analysis, the broker provides all the necessary opportunities for this. Otherwise, as I think, it is the most common broker, with the usual trading conditions. But it stands out among other brokers for its reliability.

I really wanted to trade on a trading account with MT4 trading platform, so I opened such an account with Admiral Markets. I have been trading with a broker for half a year, so far everything is going well. What I like most about it is the analytics. The brokerage has a lot of different analytic content, which is very cool. I don't have much experience in trading so the broker's materials are very useful to me. Otherwise, Admiral Markets is just a good broker. It works well and its trading conditions are favorable. There have been no problems so far and I hope it will continue to be so))
I decided to open an account with this brokerage, because traders on Forex forums were quite positive about it, and I was interested to try to trade with it. In general, I'm really satisfied, and I will continue to work with the broker. I would like Admiral Markets to continue working with the same quality and reliability)

you won't be dissapointed

I will be honest, I do not know what you will think about this broker. My opinion is "above average". The company has been operating since 2001 and has one of the most well-known brands in the industry, so my expectations were a little overstated. I don't know what I was expecting (most likely getting rich overnight by the means of some superb trading signals.. i dunno) In practice, everything was not so bright, but at least I am not disappointed.
I can note what I really liked: serious regulations and good reputation (I can even say that the broker is overrated) a little bit. I also liked that a broker offers Metatrader Supreme Edition.
Moslikely MT SE had more expectations on my side than I actually got, but this is a nice add-on. Not a money-making machine though.
Sort by:
Show:

Is Admiral Markets a good broker?

Unbiased traders reviews on ForexPeaceArmy is the best way to answer if Admiral Markets is a good broker. https://www.forexpeacearmy.com/forex-reviews/3411/admiralmarkets-forex-brokers.

Is Admiral Markets legit and regulated?


What is the maximum leverage for Admiral Markets?

To explain the maximum leverage for AdmiralMarkets has to first understand that Admiral Markets is registered in Europe, UK and Australia.

Following the decision of the European Securities and Markets Authority (ESMA), Admiral Markets introduces a leverage between 30:1 and 2:1 for retail customers in Europe and UK.

Admiral Markets introduces a leverage between 500:1 and 10:1 for customers from Australia.