... I can say that GPS is the most stable robot that I have ever bought, it really makes a profit trade after trade. Its disadvantage is the opposite trade when the trend is not going in your direction... I have enough money and I was ready to risk it and in the end it turned out that it was not in vain!

Already in November, this reversal trade closed in profit and I was very pleased with the result, but when the trade was closed I was very happy because it turned out that all these days, additional profit was accumulated on the swap...
Read more traders reviews >>

What is GPS Forex?

GPS Forex Robot is forex expert advisor (EA) for the MetaTrader platform introduced by Mark Larsen and two other programmers in 2010.

Developers describe the trading system this way: Like the GPS navigator in the car the robot is trying to predict the short term movement with a very high probability. That's why we decided to call it a "GPS Forex Robot". 98% of the time, it is right. In the 2% of cases when it is wrong we added a great reverse strategy inside which instantly opens a trade in an opposite direction and covers the small loss.

GPS Forex robot 3 is the latest version of this EA. Compatible trading instruments are EURUSD, USDCHF, and EURGBP currency pairs. A specific trading timeframe is not required.

Please also check out the details of almost 10 year of Real Account Performance Test of GPS Robot on Forex Peace Army. It's one of our longest running tests and over the time GPS EA turned impressive 570% of profit (at the time of this description update).

Please read GPS Forex Robot Reviews below and share your live trading experiences with this EA. 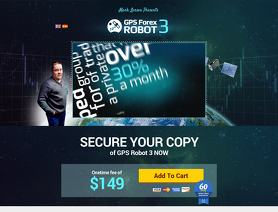 Join live discussion of GPSForexRobot.com on our forum

Stable and profitable if you let it work

Good afternoon, I greet you, Arhab is with you. I have been using Forex for a very long time, but have only been using a GPS advisor for over a year. I can say that GPS is the most stable robot that I have ever bought, it really makes a profit trade after trade. Its disadvantage is the opposite trade when the trend is not going in your direction. On October 6, the robot had to close a trade at a loss and, as always, open an opposite trade, and it was just awful. I have enough money and I was ready to risk it and in the end it turned out that it was not in vain!

Already in November, this reversal trade closed in profit and I was very pleased with the result, but when the trade was closed I was very happy because it turned out that all these days, additional profit was accumulated on the swap, so because of the swap, the broker accrued additional profit every day for my account. It turned out that the advisor's GPS deal turned out to be long, painful, but at the same time very profitable for me: the robot completely covered the loss after the first deal, and also due to the fact that the reversal deal was opened for a long time, the swap profit was additionally accrued, as a result I got a big plus on my deposit.

This was the first such long trade, usually the robot closed them quickly, but this once again shows that forex can be a very risky business, so study it before thoughtlessly investing money.

Regarding their support, instructions and website, it seems to me they do everything in too much detail, because most traders are familiar with advisors and the instructions where they write left-click there, they seem a little childish to me, but maybe it will be useful to someone. The support is ordinary, I can't say something bad or very good, just normal ordinary support, like everyone else, in my opinion. Perhaps because for me it is more important that the robot is stable and therefore I am not very interested in all this about instructions.

In general, I am satisfied with the robot. Of course, waiting for the closure of deals is unpleasant, but in the end it was worth it, because sometimes the thought came to me to close the deal manually and accept the loss. Oh, how I would regret it now, I'm glad that I didn't get in the way and I let the robot work. Thanks!
1 trader has found this review helpful

You can nervous but gps always reaches its goals

Hello everyone, my name is Anur! I've lived in Mauritius all my life, but technology is reaching our island. I have been using the gps system for a very long time (about 2.5 years) and ALWAYS the robot brought me a profit. BUT, as is usually the case, sometimes you have to be very nervous. A month ago, at the beginning of October, the system opened a reversal trade that was opened before the previous week! This is a whole month of stress and the price went in the wrong direction quite strongly, but after the storm there always comes a calm and the gps robot still closed this deal in profit! It was a very long month for me, but I am still very impressed with how the robot and its strategy worked. I want to say thank you to the developers, because it was something! If you want to feel how I felt on the day of the closing of the reversal trade, then look at the EUR / USD chart and you will fully understand my joy! Gps system was right again! I understand that forex is a risk, but I am amazed at how stable the robot is. He goes his own way regardless of any storms or winds in the market. It is worthy of respect! At the moment, I will definitely make a withdrawal of part of the profit, but I will certainly continue my trading with the gps system. I would also like to mention the support, of course, they essentially could not do anything for me, but it was nice that they were always in touch and did not leave me to fend for themselves during this difficult period. Overall I am very happy and especially glad that this trade was closed in profit !! I wish you all great deals without worry! Happy Anur from Mauritius !!

This robot is not different from the others. They all work well until one day they blow your account up completely. EURUSD trade went in the wrong direction and I am sure there are hundreds of people in the same situation as myself. Margin call. This robot generates EURUSD long trade every Tue and Thu at 11pm UK time, there is not any market analysis as they advertise. You should only pray that the market goes your way. The reverse trade takes on a massive amount of risk and if it goes wrong way your account is very easily destroyed completely.
2 traders have found this review helpful

my name is Julian and i use this EA since 12 months. Since then the Bot was perfect and made almost 40% of profit. On 6th of October the bot opend a reversal trade, as usual when i goes down more than 920 points. The Reversal Trade is 7x bigger than the normal Volume (Volume 100$ = 0.01) So the Trade was open at ~15.300, today the eurusd is at ~16.100 Thats almost a 800 points Drawdown and for my account a huge one! The Trade is 9 days one and who knows when the trade will be closed. The heaviest trade on the myfxbook from the developer is 8 trading days and a 950 points drawdown...
I recommended the bot, but for now i dont recommend it. A 800 points drawdown is too much,the "Really Small Drawdown" like the developer says is not real and you can loose everything with this bot. be careful

Wonderful robot with the most stable results

I use gps for last 20 months and results are astonishing in my opinion. Today was closed reversal trade and again in profit. For last two months it opened several reversal trades but all were profitable. I'm very happy with stability. One thing which I want to say it's profits value, sometimes it's low like 4-5% but it's still better that I have for deposit in my bank. Also they not accept all cc and when I tried to make second purchase they declined it. I contacted support and they said that added me in some "white list" and I should to do it again. Don't know why they decline purchase but they said something like fraud protection. Seems that they are very regulated, not sure. Moreover I don't like that they not have phone number or chat support, it's more comfortable for fast questions, the only one thing you need to do it's send them email and you will get answer during 24 hours. I think that such company should have at least chat support. But in my opinion the most important thing it's trading results, they can answer even during on week to me if they will still provide stable trading. I'm happy so far and hope that one day I will have the same deposit value like on their accounts. Will update my message with results sometime later.

With respect,
Anton
Sort by:
Show:

As the name reveals, GPSForexRobot is an automated forex trading robot, in another word, it is an expert advisor that can place trades for you.

Is GPSForexRobot a good EA?

Unbiased users reviews on ForexPeaceArmy is the best way to provide you with some insight on if GPSForexRobot is a good EA. https://www.forexpeacearmy.com/forex-reviews/7298/gpsforexrobot.com

Please come back often as reviews get updated or added by users from time to time.

What is the minimum deposit to trade with GPSForexRobot?

The minimum deposit for trading with GPS Forex Robot is $100.

How much does GPSForexRobot cost?

GPSForexRobot is available for a one-time fee of $149.

Can I get a refund on GPSForexRobot?

GPS Forex Robot is part of the ClickBetter Affiliate Network and therefore your purchase is covered by ClickBetter's 60 day money back guarantee policy.