RoboForex is a forex broker established in 2009 and regulated by the FSC of Belize (CySEC for its European division). RoboForex is also a member of The Financial Commission organization participating in its €20,000 compensation fund.

Accounts can be based in USD, EUR, GOLD, or CNY and allow micro lot trading. Islamic accounts are available.

Please read RoboForex Reviews below and share live trading experiences with this broker. 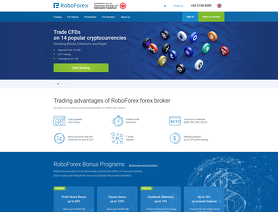 They blocked my account when trying to associate my phone number

Service use: Demo Length of use: Have not used
I tried to associate my phone number through an SMS, which never arrived. I tried with two numbers from different companies without success. Seek help through their support and they only told me to try again. When I tried to do it again, they ended up blocking my access to the members area (I guess because I exceeded the number of attempts). I tried to contact their live chat but they just don't answer. Luckily I had barely opened my account and still hadn't deposited funds. I can't imagine being in this situation, once the account is funded (although I had already sent them my documentation, so they already have all my data). Be careful with this type of Brokers, since you can be left without access to your funds due to a technical problem and non-existent support.

Reply by Manager RF submitted Jul 26, 2022:
Dear takaokim,
We always strive to improve the quality of our services and will surely handle your situation. We'll be grateful if you please contact our Support Service via a ticket from your Personal Account and describe in detail with the reasons you gave negative remarks.

Service use: Live Length of use: over 1 Year
Quickest withdrawal ever and superb support team. Thank you love you roboforex !!! Best in the business. We can rely on them !!

Service use: Live Length of use: 3-6 Months
On their ECN spreads are wide and with big fluctuation on major pairs all the time , very low quality trading condition compared to most ECN brokers.
C
CONOR
Ireland, Ireland,
Jan 8, 2022,
Registered user

Length of use: over 1 Year
My experience with ROBOFOREX has been excellent. Despite having many losing trades I found my way back to profitability with the help of the team.. As A professional trader I can certify that ROBOFOREX is a bonofida company worth working with. Highly recommended

The broker roboforex closed my trades

Also in the second pair the price changed direction before the closing of the deals !!

They do not want to return the money to me and in chat they register me 3 days to wait and after that they send me the deals and give unclear excuses why they closed even though the price changed direction !!

I know I was in high leverage but you can see that my trades closed after 1:26 minutes that the price started to change direction.

I need help getting my money back in this 1.5 years unemployment benefit.

I deposited $ 2000 there and they gave me a 100% "bonus" and turned the account into a cent account
More. Community discussion of this issue >>
2 traders have found this review helpful

Reply by Manager RF submitted Dec 7, 2021:
Dear yosi benn,
Our Live Support provided the answer to your claim in the ticket, which contains all information on the studied situation. Recently, there hasn’t been any new data that may help the Company to revise its stance on the issue. If you have any further questions with anything, please contact our 24/7 Customer Support.

Service use: Live Length of use: 0-3 Months
Great customer service by phone or chat in my language but very bad trading conditions.
The execution times that should be instantaneous in some cases even reach several minutes. It's really true, you have an order and it opens or closes even 4 minutes after it hits that level. Exceeding 2 or 3 seconds is already at the limit, but several minutes is unacceptable. So it is impossible to work on timeframes below the daily, like working with an EA too.
The spread is normal and the internal VPS service is really bad. It crashes often and you have to reset everything every time.
It has micro accounts and has an interesting internal copy trading service but it is useless if the conditions of automatic trading, scalping or working on M1, M5 or H1 are impossible.
I do not recommend anyone to rely on this broker.
The worst.
2 traders have found this review helpful

Your message contains no data necessary for closer study. In case you have any complaints about order execution or trading platform operations, you can address them to the Company’s Dealing department and describe your issue in a ticket.

Service use: Live Length of use: 3-6 Months
Any broker is not perfect so is roboforex. I love trading ECN and they have good plateforms. I just feel like somehow betraid because when you begin with them your withdrawals are fast as your deposit time even on sunday. By the time, your withdrawals time start increasing from seconds to days.
T
Thiagoibj
Kuwait, Kuwait,
Aug 31, 2021,
Registered user

Widen spread to 150 pips to make the clientes lose.

Do you believe that this broker widens the spread of the pair EURNZD in 150 pips?? And if I say that this spread up was in less than 2 seconds, do you believe it?? They are the kind of scammer that can make it!! They just do it quickly just to catch the accounts that they want to scam. If you make money, they will try to destroy you.

The average spread for the pair EURNZD is 2.3 on ECN accounts, so which marketing conditions can make it jump by almost 70 times higher???

They will reply here asking my account number..... but they have it and knows exactly which case I am talking about. It happened on the 23rd of August 2021 - 22pm broker time.
2 traders have found this review helpful

Service use: Live Length of use: 0-3 Months
Get Margin call while the price is not reach the standart price as other broker.Why the price action for gold not same as any broker? All broker price action only 1678.00 (Tradingview and etc) but your price action is 1638.00 ? For your information, my Procent account should not margin call if your price action same as other. Please give me your answer as soon as possible or I will make report to FINRA and www.econsumer.gov. My ticket ID 1150690
1 trader has found this review helpful

Reply by Manager RF submitted Aug 12, 2021:
Dear AmirulHakim,
The answer has been given in the ticket you created.

Don't waste your precious time on any of their contests, free or otherwise.

Service use: Other Length of use: over 1 Year
To start, Roboforex is by far the worst, scammiest and useless trading platform and I have no idea how they run their operations but surely whatever they are doing is unethical as per my knowledge and today i am going to prove it.

Firstly, it has blocked me and put a permanent ban on me from entering any of their four(4) free tournaments for a "VIOLATION OF RULES" according to them.

I on the other hand protest this action of theirs as i did not do anything of the sort and before participating i read the contest rules top to bottom atleast 5 to 10 times. I am an intermediate trader and have been trading for over 3 years and have enough experience when it comes to demo or real trading contests and while this has happened to me in the past with other brokers too, it has not happened at this magnitude.

I achieved 1st Position in their demo contest Kingsize MT5 no. 368 and for a while it showed that i was the winner, an hour later the page showed that i was disqaulified(you can still go on that page and check it). I was shocked to see this because to my knowledge I followed all the rules. I even wrote mails to the support team and messaged their forum too but have not yet received an answer from their side. At this point I have already given up and do not care about their answer, because even if they provide an explanation 24 hours are up and they will give away the prize money to someone else who replaced me as No. 1 on their rankings board. But thats the smaller picture.

The Bigger Picture is something more awful and unethical. Let me explain. There is a condition in the contest rules that only 1 member of the family can participate in the contest at a time and if 2 members of the same family/relation are found then they both will be disqualified. GOOD TERMS AND CONDITIONS. TOTALLY AND FULLY ACCEPTABLE. I HAVE COMPLIED WITH THESE RULES FOR THE WHOLE TRADING PERIOD I HAVE HAD WITH ROBOFOREX. I had won this same Kingsize MT5 contest an year ago and was on a timeout period of 12 weeks, so I registered my father into this contest and DE-ACTIVATED MY CONTEST ACCOUNT. I did that, maintaining the integrity of the rules set by the broker so that my father too could give this broker a try but he is not as good a trader as I and after 12 or 13 weeks/completion of my timeout period i DE-ACTIVATED HIS CONTEST ACCOUNT and RE-ACTIVATED MINE. All was going well. I had won again. But this time they disqualified me and when i saw their forum board on permanent disqualification i got to know that they have blocked mine and my fathers contest trading accounts. I was shocked to even see his username as i had DE-ACTIVATED his contest accounts a long time ago. So when i asked him to check his account he told me that all of his accounts are ACTIVE. They were NOT ACTIVATED BY HIM. How this MAGIC happened i do not know. This is whats troubling me. Does the company have access to turn our accounts active and inactive according to their will. If yes, then this is unethical and as dangerous as stealing money from us and hence they are not at all trustworthy. Even if they answer my query, they have lost my trust.

Also, their support is really unresponsive so -5/10. Lucky for them that FPA offers atleast 1 star to write a review, otherwise they are worthy of a lot less.
1 trader has found this review helpful

When deciding to participate in the Competitions, every client of the company agrees with the terms and conditions. In the situation described by you, the actions of the company fully complied with the stated Rules and cannot serve as a basis for claims.

Is Roboforex a good broker?

Unbiased traders reviews on ForexPeaceArmy is the best way to answer if RoboForex is a good broker. https://www.forexpeacearmy.com/forex-reviews/7374/roboforex-forex-brokers.

How do I get Roboforex bonus?

RoboForex offers a welcome bonus. To receive this bonus:

Is RoboForex a market maker?